Dr. Archer Howell is determined to make humans immortal and believes he has the means and the knowledge to make it happen. His theories have already proven successful on mice, and he is now convinced the best way to further prove his hypothesis is by reanimating human corpses. Unfortunately for him, Professor Tucker thinks he’s an absolute loon and is standing in the way of funding his grand plans. So what’s an evil scientist to do? Why, drug Tucker’s teenage son, Michael, and hypnotize him into brutally killing both of his parents of course! 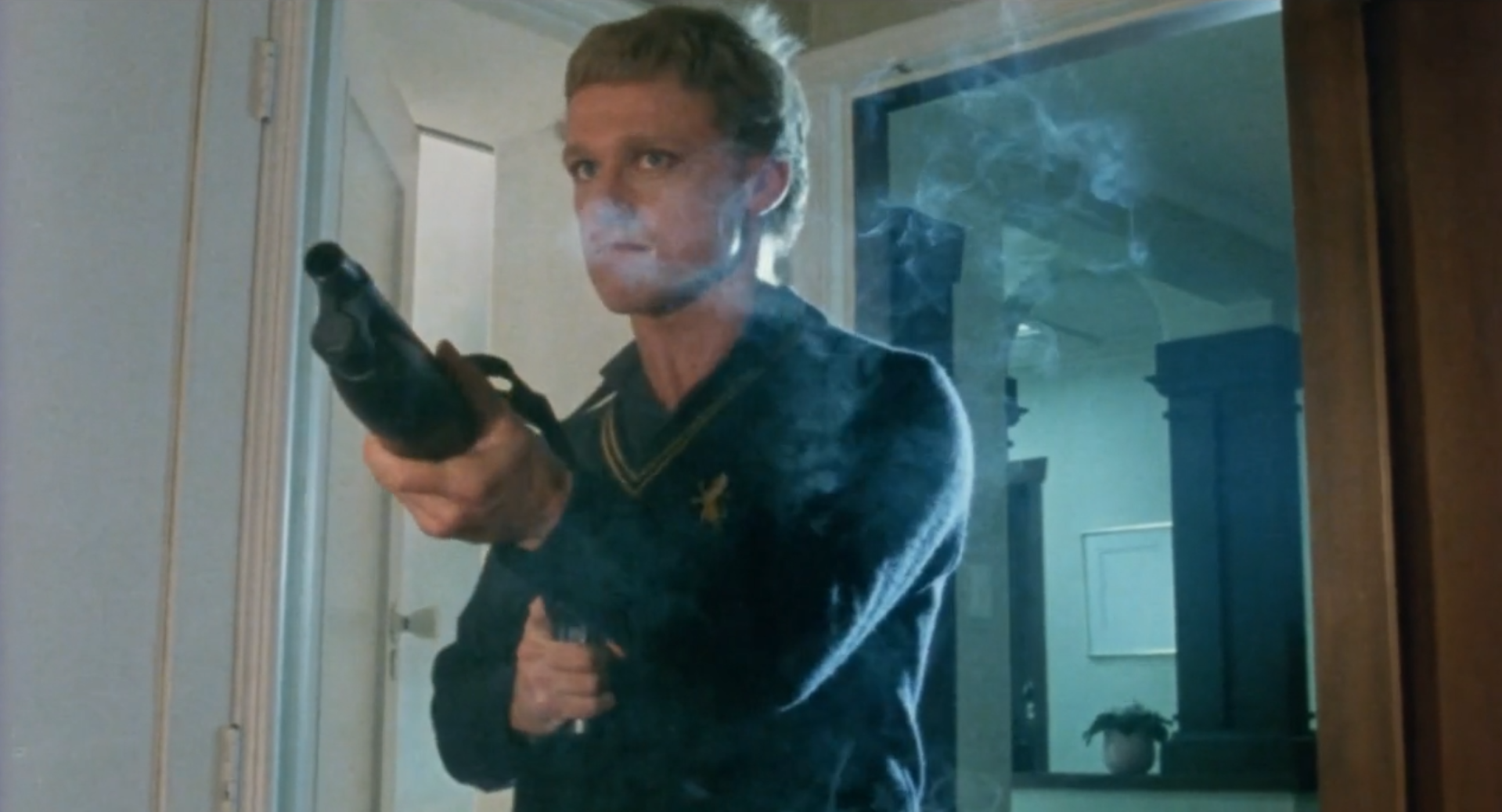 Surprisingly, Howell’s ridiculous plan proves successful and he’s able to continue on with his nefarious schemes. But seven years later, Michael is released from the mental institution and hellbent on revenge. While traveling with three friends, Michael discovers Howell in a small, isolated island that seems to be populated by fidgety civilians, loyal underlings and a bunch of angry mutants. Seems Howell’s been a busy little bee these last seven years. Michael’s mission of revenge just got a lot more complicated. I’m gonna be honest. Even after just watching this movie, I’m still not 100% sure what the story was even about, so I sincerely hope that that synopsis makes at least a modicum of sense. Because, honestly, 90% of this movie is completely baffling. Death Warmed Up is the kind of film where the main thought process seems to have been to throw everything at the wall to see what would stick. As a result, this little kiwi-horror flick has a wide mix of influences. It’s got a little bit of Dr. Moreau, a little bit of * insert name of any zombie flick here *, and for some style points, they threw in a little bit of Mad Max for fun, because who doesn’t love a bunch of leather-clad weirdos smashing stuff and trying to run people down on motorcycles? Add in some blood, a few hot nurses, the New Zealand version of blackface (Also known as: a white dude poorly attempting to add some comic relief by trying look and sound like middle eastern stereotype), and a quick instance of gay subtext, and you have a recipe for success!

…. Or not, because like I said, the film doesn’t make a damn lick of sense, so I at least hope they had some fun making it. The movie’s main issue can be summed up in two words: the plot. Or I guess I should really say, the coherence of the plot. The film’s first ten minutes or so make perfect sense, or at least as much sense as one could hope to expect for the opening of a cheap B-Movie horror flick. You’ve got a doctor who’s clearly evil, trying to do something really evil, but his plans get thwarted by some pudgy academic (as is wont to happen regarding evil plans.) In order to continue his evil plans, he implements another, more minor, evil plan, to have the man standing in the way of his goal eliminated. To do this, he drugs and brainwashes the man’s son to kill his father, thus eliminating his roadblock and creating a convenient fall-guy. The son does his time and is eventually released, free to now seek revenge on the evil doctor who ruined his life. Oh, it is NOT a good idea to make that face in a public shower.

Make sense so far? Good, because after that point the film slowly starts to slip further and further into incoherency, until it finally ends on a truly baffling note, because apparently the writers couldn’t figure out how to end this inexplicable tale any better than the viewer could. Why did the doctor let Michael live to give him the opportunity to come back for revenge? How the hell did the doctor manage to take over a whole island, and what the hell is his plan? He doesn’t seem to have one beyond creating a horde of mutant zombies for his own amusement. You’re telling me that Michael and his friends just happen to conveniently vacation at the same island the doctor now resides? He spots the doctor and wants revenge but — OH! — let’s make a pit stop at the beach so we can all frolic and make out first, before we do some inexplicable spelunking in some abandoned World War 2 tunnels? And what in the world are a bunch of civilians still doing on an island filled with murderous mutants when they KNOW it’s filled with murderous mutants, as indicated by the bartender’s reaction of “Oh shit, not again!”, when informed the mutants had broken out of the hospital? Are you telling me these murderous rampages happen often? Did the doctor have to pay you all off in order to get you to stick around after the first murderous night of mayhem? What the hell is going on here? And it only gets worse from there, as by that point the film still has about 20-minutes left to go, and the kids haven’t even made it to the island hospital yet, and that’s the point where the plot really nosedives into oblivion. I think the writers just decided to throw zombies and blood at us and sort of gave up on trying to explain things at that point. I know that’s the point where I gave up trying to figure them out. Given the plot, it shouldn’t come as any surprise that the characters themselves also run the gamut between interesting and mediocre. The ladies are mostly there for eye-candy, with one of them clearly meant to be little more than the perpetual ‘damsel in distress’, though Michael’s girlfriend Sandy ends up being the only truly competent and believable character, perhaps in the whole movie. The mutants are mostly brain-dead henchmen, except for Spider, who really winds up being the film’s main antagonist despite the movie’s insistence to the contrary. He’s quirky and a little goofy, but he ultimately also ends up being horribly malicious, even more successfully than Dr. Howell. Michael Tucker (played by Michael Hurst, probably best known for his turn as Iolaus on Hercules: The Legendary Journeys), looks like a missing member of AC/DC in his schoolboy uniform, and is ultimately propped up as the film’s hero. But his whole arch just doesn’t work, because while he does manage to get his revenge, it’s not because he did anything to earn it. He doesn’t achieve his goals using any kind of wit or cunning, but because the villains end up being a bunch of dolts and the film just seems intent on making him succeed. Turns out Doctor Howell isn’t actually all that smart, just evil, and Michael just ends up stumbling into his plans based on coincidence and good luck, and the one time he does get proactive the situation ends with him failing spectacularly.

Good plan, doc. Just invite the guy who wants to kill you into the room where all the pointy objects are. You didn’t think this through, did you?

The more successfully heroic character is actually his friend Lucas, who successfully constructs a trap to kill one of the mutants. But Lucas sucks too, because his action of peeing on one of the tires of Spider’s vehicle is actually what sets into motion the entire cluster of events the kids have to deal with. If Lucas hadn’t done that, then he wouldn’t have pissed off Spider, then Spider wouldn’t have become obsessed with tracking them down and getting revenge, first by trying to run them off the road, then by chasing them through the tunnels, and finally by releasing the basement-full of angry mutants onto the entire town, causing apocalyptic levels of destruction. So in short, the acting in the movie is fine, but just about everyone in this movie sucks, especially Lucas, because his assholery is what caused all this shit to go down in the first place.

I beg to fucking differ! It is 100% his fault! If he’d peed off the side of the ferry like a class act, none of this would have happened!

The film’s one saving grace is the copious amount of blood, violence and gore it contains. The brutal shotgun killings at the beginning are just the tip of the blood-soaked iceberg. There are also stabbings, impalements, beatings, brain surgeries, an exploding head, and gooey zombie innards. Gorehounds should be more than pleased with the outcome, even if some of the effects are less than optimal (brains don’t pulse like that, Einsteins). Though personally, my biggest complaint was that you could clearly see that one of the characters changed into a flame-retardant suit right before being set ablaze. In some instances I might let something like that slide, but since they didn’t even bother to hide the change in wardrobe, I consider it particularly egregious.

Death Warmed Up is an oddity amongst oddities. It completely lacks any narrative structure, most of the characters are moronic, or have nonsensical motivations, and the editing is janky as hell. But this really isn’t a movie one watches for the story. It’s the kind of movie you watch for the odd and interesting visuals and the buckets of blood. So if you’re a fan of bloody, gruesome kiwi-cinema or odd horror movies in general, then this should be a quick, interesting watch. But if you’re a stickler for things like ‘story’ and ‘believable characters’ then you’re going to be very disappointed and confused.

Death Warmed Up is available on a variety of streaming services, including free on Tubi TV and Vudu.