Vinny Durand has high aspirations. He fancies himself as a great Hollywood director. The only problem is that he’s just a small time taxi driver living in New York City. But Vinny has set his sights high, and by god he’s going to at least make an attempt at reaching his dream. So he packs his bags and heads off to the Cannes Film Festival to track down Jana Bates, an internationally known cult horror actress that he is convinced is the only choice to star in the movie he has written. Jana is in Cannes to promote her latest movie, of which she is nominated for Best Actress. Vinny is obsessed with Jana and tries multiple times to get in contact with her, but is rebuffed at every turn. His attempts are further complicated by a string of mysterious disappearances and violent deaths involving people close to Jana, but Vinny is determined to get her to star in his movie at any cost.

Oh, Troma, with all the weird crap you’re known to produce sometimes even I forget that you’re connected with some decent films. Granted you were just the distributor, but it’s still refreshing to see your name attached to a movie that manages to be good without having to rely on being ‘so bad it’s good’ descriptor. Of course, that doesn’t stop the film from being weird, but you wouldn’t be Troma if there weren’t some serious oddities going on in the movies you’re connected with. The Last Horror Film was actually filmed on location at the Cannes Film Festival in 1981, so for film buffs the movie is almost like a small time capsule of films from the era. Not only is it fascinating to see all the different films that came out that year, it also adds a sense of authenticity to a slasher that in some instances can feel very surreal. But, like Basket Case, Last Horror Film was also shot ‘guerilla style,’ meaning that the filmmakers acquired no permits to do any of their filming. For the most part their methods aren’t noticeable (like in the more controllable indoor environments), but in some instances this is very apparent, which adds a bit of grittiness to the film, something not altogether unappreciated in something like a gory slasher.

Hey, I recognize you! They used the money they were supposed to use to get permits to bribe the marquee guy. Cool.

On top of that, the film has some top-notch cinematography. There are a variety of creative angles, an appreciation for ambiance, and a clear knowledge of light and color. Some of the scenes are more well thought out, angled and choreographed than others (obviously), but for a movie about an obsessive fan and a crazy killer it looks a hell of a lot better than you’d initially expect.

Being a Troma film, it is perhaps not surprising that the film bills itself as a horror/comedy. But unlike some other films attached to the studio, there isn’t anything here that most people are going to consider laugh-out-loud funny, slapstick-ish, or even ‘so stupid it’s funny’. Instead, most of the humor is subtle and consists of inside jokes and dark humor that will likely only appeal to fans of the horror/slasher genre. At one point Jana is confronted in her hotel room by Vinny after she’s just taken a shower. Naturally, she’s freaked out and makes a run for it, screaming for help. But everyone she comes across knows she’s a horror actress and assumes it’s just all part of a publicity stunt. So poor, terrified Jana literally has to run down a crowded street, towel and all, all to the applause of the crowd, as she tries to flee an obsessed fan. Although perhaps the most amusing thing is that she managed to keep the towel on the whole time.

The acting in The Last Horror Film is likely some of the best that I’ve ever seen from a movie that had Troma attached to it. Joe Spinell, who plays Vinny, does an amazing job. He manages to make Vinny… well, totally nutty, obviously, but he also manages to make him, at least initially, sympathetic, and, dare I say it, even a bit relatable. It’s easy to understand that a guy wants more in life and wants to improve his standing, but of course he goes about it in the most inappropriately wrong ways, by metaphorically jumping into the deep end of the pool without even knowing how to swim. He’s never directed anything before, he has no contacts, only the barest idea for a script, and no way to get in touch with his ‘star.’ But he heads off to Cannes anyway, heedless of his mother’s concerns that he’s gone completely nuts, because damn-it-all, he is making that movie. That, and further actions, highlight that though Vinny may be a grown man, he likely has the maturity level of a teen. You start to feel a little sorry for Vinny…or at least you do up until he breaks into a woman’s hotel room and chases her down the hall. Then Vinny goes from being a little sympathetic to being a lot more sinister and you’re not really sure what to make of Vinny any more. It’s a subtle, but interesting transition, and Spinell pulls it, and Vinny’s moments of goofiness (it’s also a comedy remember) off so well that you barely even notice it. Seriously, ya’ll. Don’t do this shit.

The Last Horror Film is filled with copious amounts of blood and gore and quite a bit of nudity (apparently 90% of the women in Cannes walk around topless). Enough in fact that it ended up on the UK’s ‘video nasty’ list. There’s a decapitation, multiple stabbings, shootings, a chainsaw, and one instance of a dummy being thrown from a tower-

Considering more recent films, the gory bits are actually pretty reserved and the camera doesn’t linger on the icker bits so they go by pretty quick, but there’s still enough there that it should placate the gore hounds for a good couple hours. The Last Horror Film is an entertaining little movie. It’s equal parts slasher, comedy and surrealist oddity. It’s filled with some genuinely beautiful shots as well as a lot of gritty, bloody brutality. The acting is great, with both the main character and the supporting cast fulfilling their horror and comedy roles to the best of their ability (Spinell’s real-life mother, who plays his on-screen mother, was nominated for Best Supporting Actress at the Saturn Awards). It does suffer from a few pacing issues, but it ends up being an entertaining little horror film with just enough subtle humor added in to help mellow out all the brutality.

The Last Horror Film is available for streaming on iTunes and Amazon Prime. 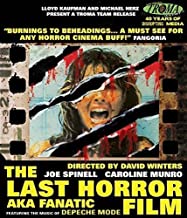