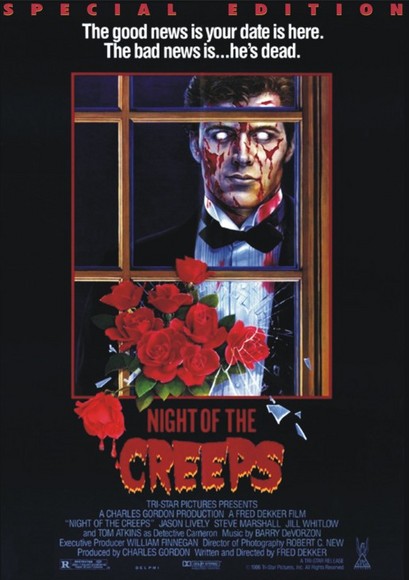 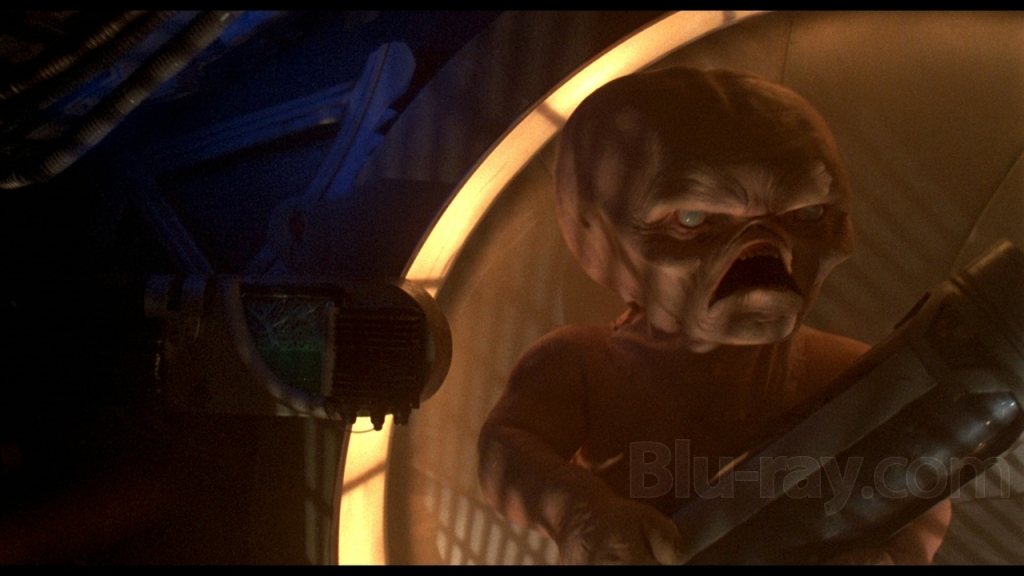 Pictured: Not the first thing I was expecting to see when the movie started.

The lone alien the other two are chasing then expels a capsule out into the vastness of space, where it eventually finds itself in drab 1950’s America. How do we know it’s the 1950’s? Because everything is in black and white. 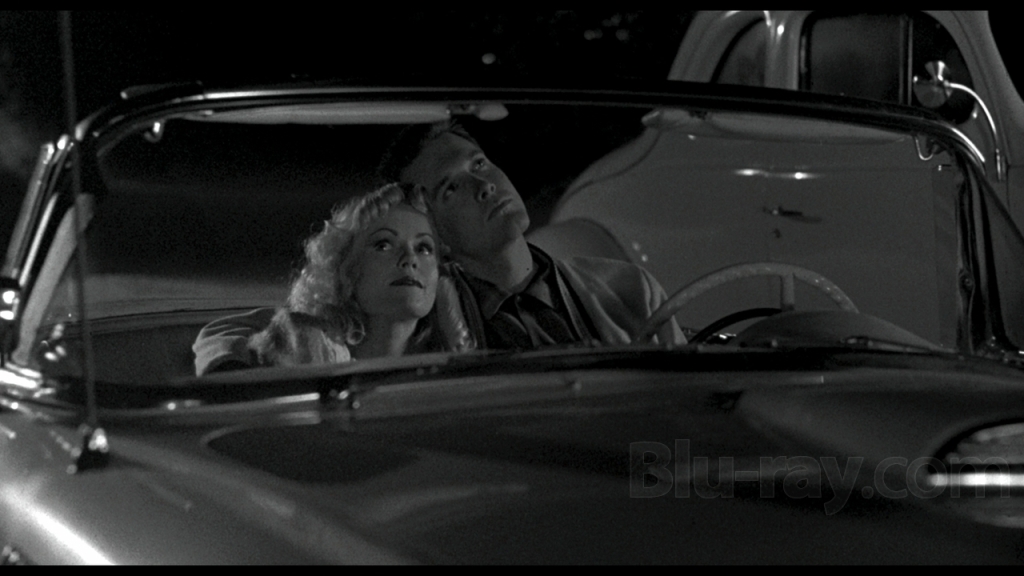 Because everyone knows color wasn’t invented until hippies came along.

The two lovebirds pictured above watch the little capsule enter the earths atmosphere and land (In spectacular fashion, I might add), and go to check it out. Or, I should say, the boyfriend goes to check it out, leaving the girlfriend in the car, which she’s none to happy about. Oh, did I mention there’s a maniac with axe wandering around and that there’s some sort of alien experiment inside the capsule?

So, to recap: Boyfriend leaves girl alone in car to go poke at an unknown alien thingy in a capsule while an escaped mental patient is wandering around, armed with an axe. Can anyone see this ending well? 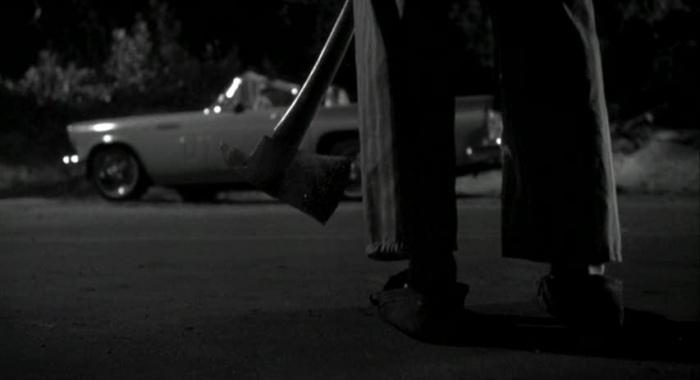 The answer to that question should be: no.

The movie then skips ahead to the 80’s (now filmed in Technicolor and rocking some 80’s themed music) and introduces us to these two awkward, not too bright, but for the most part loveable fellows: 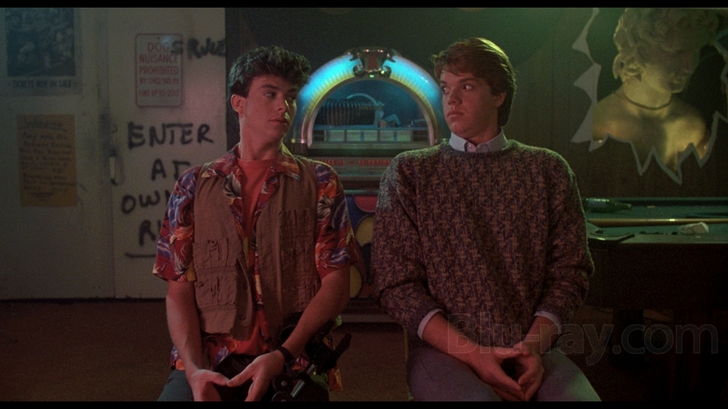 That’s young, whinny Chris on the right and he’s bummed out that he doesn’t have a girlfriend. He finds a potential candidate soon enough in sorority girl, Cynthia. But of course, Cynthia already has a boyfriend, a testosterone filled frat boy so stereotypical they gave him the most cliché bully name ever: Brad.

In an effort to impress Cynthia, Chris and his buddy JC try to join Brad’s frat, but first they have to pass a test. And by test I mean they have to commit multiple felonies and break multiple city ordinances by leaving a corpse on a competing frat’s front lawn.

While trying to pull of this incredibly stupid endeavor, they come across the cryogenically frozen body of the dumb 50’s boyfriend from the beginning of the movie who is, for some reason, being held in a building on campus grounds. 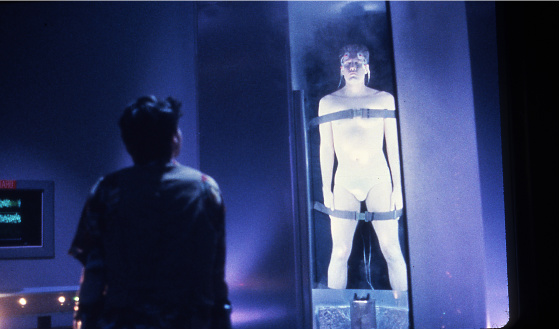 I’m just glad he has underwear on.

The two nitwits manage to get the guy out of the freezer, but bail when he wakes up and grabs one of their arms. This lets the ‘supposed to be dead’, alien experiment laden, 1950’s frat boy loose on campus and ultimately culminates in what has to be one of the most bad-ass dates ever. 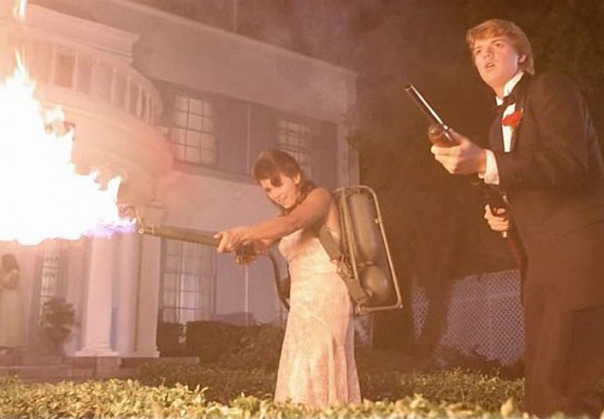 Any date that involves a flamethrower, but does not involve it being pointed at you = awesome.

The best thing Night of the Creeps has got going for it is the special effects. The comet/falling experiment scene mentioned above is quite striking by itself. But it’s in the makeup where the effects really shine. Those real-life special effects give the movie a disturbing yet charming edge that similar CGI elements can’t hope to compete with. 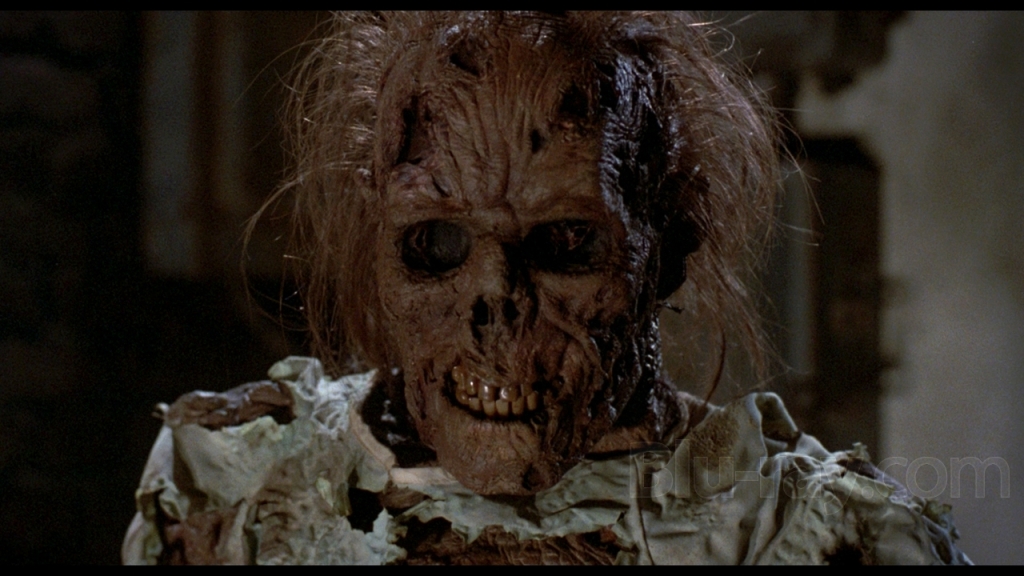 The acting leaves something to be desired, but with a movie that obviously drew so much from B-movies in general, serious dramatic acting would have seemed out of place.

It also would have made it harder to believe the shear number of dimwits who keep missing the fact that there’s a freaking zombie standing 3 feet away from them. But maybe zombified behavior is normal on college campuses. 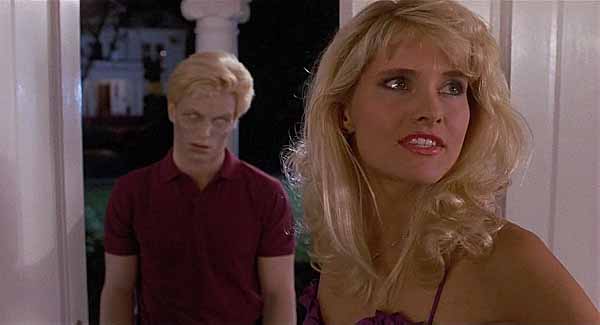 Night of the Creeps is a real treat. It’s filled with a bunch of sci-fi, horror and even a bit of romance B-movie elements, but blends them together in a fun, witty, and well-paced film. It’s a romantic sci-fi/horror gumbo, if you will. It’s the kind of movie perfect for those who like a little humor in their horror and are willing to not take their films so seriously. It’s a great little horror film and I’m just sad that it took me so long to watch it.

Night of the Creeps is available to rent on Amazon, Vudu, Google Play, iTunes and Youtube. 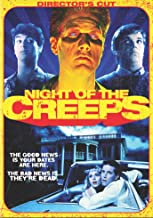 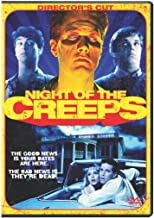 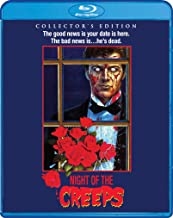