Lutz, the sole detective of sleepy little Pottsville Idaho, has found himself in a bit of a pickle. It’s Easter weekend and several members of Pottsville’s citizenry have mysteriously disappeared. The only clues he’s been able to find so far have been small indentations in the ground and a slimy, sticky residue found at each ‘crime’ scene. He brings the strange happenings to the attention of  Mayor Lane, but Lane seems less concerned about the citizens and more concerned about what the publicity could do to the town’s precious potato business (because ‘Idaho,’ I guess.)

To placate the Detective, the mayor hires a smarmy chemical safety engineer, one who’s been trying to convince the town that, yes the radioactive waste that’s being dumped into their drinking water is quite safe thanks for asking, to help Lutz with his investigation. So now it’s up to the suspicious detective and his corporate shill of a companion to solve this mysterious string of disappearances.

The Being was written and directed by Jackie Kong, in her directorial debut and fresh out of college. With 4.5 million to work with, the film actually had a fairly decent budget for the early 1980s, but despite a couple of high-points and being one hell of an amusing (if not disjointed) ride, the inexperience of the filmmakers stands out loud and clear. Doesn’t stop the film from being amusing, though.

To begin, much of the plot barely makes a lick of sense, especially anything regarding the monster. Based on the ending, the thing is apparently HUGE, but in one of its earliest scenes at a drive-in it liquifies (?) so that it can seep into the car of an unexpecting Cassanova and his date. Then it seems to reform, with a sticky, skeletal hand reaching out of the floorboards, before it eats (or liquifies and then eats ?) its victims. At least I think that’s what happens. I’m honestly not entirely sure what’s going on in that scene, and subsequent scenes don’t really shed much light on it either, because the creature never kills anyone like that again. The movie does seem to suggest that it can change its size, and does so so that it can crawl through tight spaces, but that doesn’t explain why it never uses that skill in the 15+minute long climax at the end where it’s busy beating up an inept Det. Lutz. Though I suspect one of the reasons for it is soundly in the realm of ‘budget constraints,’ but whatever the cause it still makes the monster not feel as fleshed out as it should be. And there’s a lot of flesh to work with here, trust me.

The rest of the plot fares little better than the lack of thought in the creature’s abilities. It basically feels like every monster B-movie cliche was thrown into a blender and then set on frappe. Some things feel clearly thought out, but much of it feels as though the script was either being written or edited from day to day as production wore on. The dialogue doesn’t feel like it got any farther than the rough draft phase, the editing is choppy (It’s day! Now it’s night! Day! Night!)  and the characters actions and motivations seemed designed purely to create drama and move the plot along, as opposed to having any basis in logical reality. At one point, a much hated character gets his comeuppance at the hands of the creature and his partner, who up until this point hasn’t shown much more emotion towards him other than disdain, wails as if he’s just lost a dear friend. Shock in such a situation I can understand, but coming from a character that felt pretty bland to begin with just makes the whole thing seem extra forced.

Dude, you didn’t even LIKE him. Why you so pissed?

Then there’s the acting. It’s…hmm….well, it’s there I guess. The acting here doesn’t seem to aspire to any skill level higher than ‘meh’, though there are a couple of slightly familiar comics here that manage to make a couple of characters who would have otherwise been intolerable at least slightly amusing. But other than that, when the acting doesn’t feel forced, it’s wooden or feels like people are reading cue cards. Nothing is particularly terrible, but no one here is particularly memorable either. Best actor in the film.

This includes the main character, Detective Lutz, aka Rexx Coltrane, aka Bill Osco, the movie’s producer. Osco is about as charismatic and engaging as a bag of the potatoes Pottsville’s mayor is so desperately trying to save. Shoving himself in a role that has to carry half of the film was a poor decision. Though I must admit, after being forced to spend so much time with the duddard, watching him get the crap kicked out of him at the end of the film was rather cathartic.

He also seems to think he’s Marry-freakin’-Tyler Moore or something. It was weird.

The one place where the film really shines is the creature and gore effects. As all good B-movies should, the film starts with the monster bit early, generously peppering the multiple monster attacks throughout the movie. The effects include everything from slimy monster limbs, wriggling coils of monster flesh, buckets of ooze, decapitations, creepy prehensile tongues, a dismemberment, and one heart being ripped out of a chest. There are a couple of instances where they cheap out and you can tell they just threw a puppet into the frame–

–but for the most part the effects are pretty solid. Unfortunately nothing here is going to be particularly memorable, but for monster movie fans it should be quite satisfying.

At least, I really hope that’s a tongue….

So, is The Being any good? Fans of cheap monster movies (or horror movies in general) will likely get some enjoyment out of it. The monster effects are pretty tight, and the final design manages to be entertaining, though not particularly creative. For such fans, the final 15 or so minutes alone will likely be worth it (in a ‘so bad it’s good’ kind of way). It may not be inspiring, and the plot and characters are about as mediocre as you can get, but it’s still ended up being pretty fun to watch.

The Being is currently available for streaming via Amazon Prime 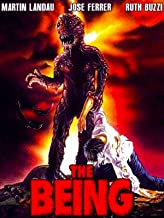 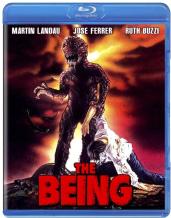