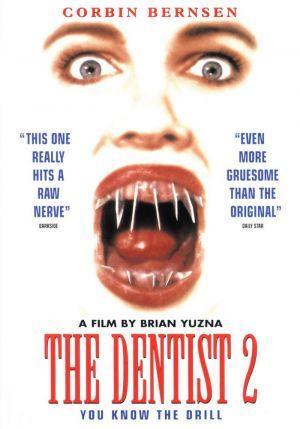 AKA: The Dentist 2: Brace Yourself

After an undisclosed amount of time, Dr. Feinstone manages to snag a hostage and successfully flee the insane asylum he was sent to after the first film. Fleeing California, he makes his way to the small town of Paradise, Missouri. Turns out his previous IRS problems weren’t solely his business manager’s part, as the fugitive doctor had indeed been squandering away money for a rainy day. Now working under the alias of Dr. Caine, Feinstone tries to resume his once normal life, eventually taking up the post of Paradise’s new town dentist. He finally thinks he’s got a handle on his life again, going so far as to begin contemplating courting local real estate agent, Jamie Denvers. But just when he thinks things are looking up, he spots the object of his affection with another man, and just like that, all his control and anger issues rear their ugly heads, resulting in familiar homicidal urges. Meanwhile, his wife Brooke is still alive and well and trying to use a private detective to track him down so she can partake in her own homicidal urges.

And to be honest, after the last film, I don’t really blame her.

Well, lookie there, they made another one.

While I truly enjoyed the first Dentist, I can’t say I really enjoyed it enough that I thought it warranted a sequel. But clearly others disagreed with me, as evidenced by this perfunctory continuation. On the plus side, the sequel does bring back director Brian Yuzna, and both Corbin Bernsen and Linda Hoffman reprise their roles as Dr. Feinstone and Brooke, respectively. So as least as far as that’s concerned, the visual and acting continuity remain, blissfully, largely intact. But while some of the acting and creative minds came back for a second outing, much of the focus has shifted, resulting in an, though admittedly similar, much less enjoyable or fun slaughter outing.

The film’s biggest change is the shift in emphasis from the dark, comedic elements of the first film, to a more purely psychological standpoint. Almost all of the movie’s focus shifts to Feinstone’s mental state and his struggle to take control of it. These particular elements were also present in the first film, but were treated almost as more of an afterthought. In the sequel, they are much more prevalent and handled much more seriously. So we end up being treated to a lot fewer outlandish moments where the doctor is seeing perfectly healthy teeth rot away, and a lot more scenes where he’s just dealing with his own mental issues and trying to control his murderous urges. Which I actually liked in the beginning, and would all be well and good, except the film spends so much time focusing on these areas and treats them so seriously that oftentimes it’s hard to tell whether or not what you’re seeing is really happening or if it’s just another of Feinstone’s hallucinations. This wasn’t the case in the first film, as the hallucinations were quite easy to distinguish. Yet at the same time, the film tries to also keep the slightly over-the-top, darkly humorous gory bits. So the end result is you end up with a film that tries to incorporate some nice, new ideas, but the new material clashes so horribly with the holdover portions of the last film, that the two styles don’t really feel like they belong together. But the film’s biggest drawback is it’s horrendous pacing. It starts out alright, with a little blood, and a little background and a little intrigue, but after the first few minutes the plot basically slows to an agonizing crawl as we watch Feinstone slowly try to start rebuilding his life. Again, this is where the focus on the doctor’s mental state just becomes a detriment, because between his arrival in Paradise, and the last twenty-or-so minutes of the film, we’re treated to little more than a painfully dull attempt to build up tension until the bloody final confrontation. There are two quick deaths in between those points, but considering they’re spaced out in an hour of screen time, it’s not nearly enough to keep your focus. I only kept watching because I was sure it was going to get better. And I was right, it did at the end. But my goodness, it took forever to get there and that whole middle section felt like such a chore to watch. He didn’t kill him. He died of BOREDOM.

Like it’s predecessor, the film’s one bright spot remains it’s acting and it’s gore. Corbin Bernsen once again returns as the highly disturbed, obsessive and sadistic doctor, and essentially carries the whole film. He once again manages to convincingly portray the sides of the doctor, both the suave and the demented, and can easily switch between the two at the drop of a hat. His performance is likely the sole reason that the movie, though flawed, still manages to work. Linda Hoffman also returns as his abused wife, Brooke, but in the grand scheme of things her role feels rather tacked on, even if her motivation is rather understandable. Jillian McWhirter meanwhile, ends up playing a rather convincing and relatable love interest. She seems just about as intrigued and bewildered by Feinstone as the viewer is, and may be the only character in the film that the viewer can reasonably have any real sympathy towards.

She has horrible taste in men, but at least she tried to call for help and grab a weapon. So she’s already 90% smarter than everyone else in the film.

Meanwhile, while the volume of gore seems to have gone down significantly from the last film, the quality remains as strong as ever. Though that’s probably just partly because there’s not as much of it. Still, there’s still some very shocking sudden deaths and one moment of very brutal, and highly uncomfortable dental torture that will likely keep the gore hounds satisfied. But again, those moments are few and far between, so don’t expect to see anything impressive until the very end.

You wanna know how I got these scars?

While The Dentist 2 tries to incorporate some new ideas and elements into an existing design, the end result ends up being a rather dull and charmless follow-up to the original. I applaud it for keeping some of the more amusing ideas from the first film (That man just cannot hide a body. You’d think he had learned by now), and I do appreciate that it didn’t cut out the humor bits entirely. I was highly amused while Maggie, mouth open and highly uncomfortable, tried to awkwardly diffuse the lover’s tiff that Feinstone and Jamie were having, that Jamie didn’t even realize was a lover’s tiff, because she clearly didn’t want that conversation to go down while the dentist had an active drill in her mouth. But while it still contains some humor, and it continues to have some top-tier practical effects and some entertaining death scenes, the mish-mashed tone and long bouts of nothingness in between the action really drag it down to the point where it’s hard to recommend, unless you’re a huge fan of very, very slow-burn psychological horror outings. If you like the original or well-done torture scenes, then this is probably worth watching at least once. But if you’re looking for something a little more fast-paced (or have a horrible fear of dentists), then you’ll want to look elsewhere.

The Dentist 2 is available on a variety of streaming services, including free on Tubi TV.

It is also available on DVD and an out of print Region B/2 Bluray. 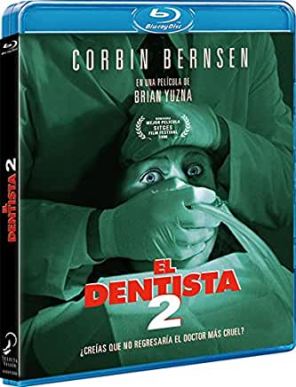