Trog starts out with a group of collage kids decide to go spelunking in an undocumented and oddly highly illuminated cave. Going against common sense they decide to not only explore the cave, but to also explore the little water chasm beneath the cave, stripping down to their skivvies and diving right in. This does not end well for two of them.

The third one, the smart one who didn’t strip down to his tighty-whities (Thank God. I can only stand so much of that), drags out the mentally unstable one and brings him to a hospital run by Dr. Brockton (played by Joan Crawford).

Brockton is intrigued by the one boy’s incoherent mumblings and after a quick trip to the caves herself, later returns with police and news crews in an effort to capture what’s inside. While there they practically trip over a man in an ape mask- I mean, a cave man. Yeah, that’s what I meant, a cave man. Not expecting to find anything, even though they’d been told that that was exactly what they had been sent to look for, the visitors all flee the cave en masse (save for a lone camera man who felt some inexplicable urge to die for his craft), bringing the cranky beast out with them.

Of course the police, being completely inept at their jobs, have no idea how to handle angry cave men, leaving it up to Dr. Brockton to take care of the situation.

Oh, but the gentlemen were doing so well….

Dubbing him a troglodyte, aka Trog, Brockton takes him back to the hospital where she tries to study and learn about this mysterious cave man. She gives him toys, teaches him shapes, plays ball with him and with the help of other scientists performs a procedure that gives Trog the ability to talk.

It’s almost a touching scene until you realize there’s a rack of wire hangers just off screen.

Everything’s going rather smoothly, all things considered, until the overly religious real-estate guy gets all pissy because he’s afraid of the prospect of his property values decreasing. So he decides to go all saboteur, purposefully provoking Trog and letting him out of the hospital. Things go downhill at that point pretty rapidly.

Of course, the provocation queues the monsters homicidal side and he proceeds to go on a rampage through the neighboring town where he steals food, throws a clerk though a window and hangs a butcher from a meat hook in a symbolic gesture that even the youngest of viewers could fathom.

Pictured: The writers and director hitting you over the head with the Symbolism Stick.

He also flips a car that was unfortunate enough to cross his path, which, one badly edited scene later, spontaneously bursts into flame for no apparent reason, other than, perhaps, to highlight the idea that British cars are crap. 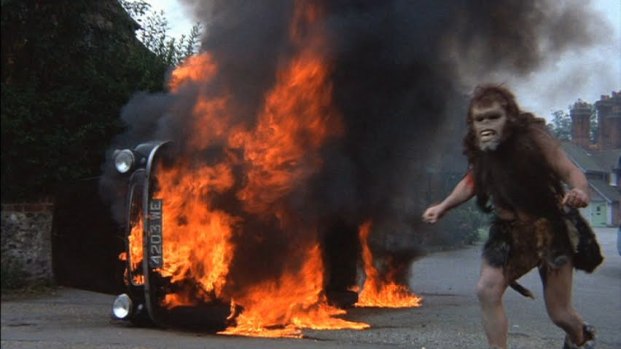 Because at this point no one really cares about logic anymore.

But this is just the type of movie Trog is. Nothing really makes too much sense when you stop to think about it. Which is fine for a creature feature like this, but there were even a couple jumps in logic that I couldn’t quite turn my brain off too. The main one being one of the core issues of the movie: Now that we have him, what do we do with Trog? The movie only presents two possibilities. Either they keep Trog because, you know, great scientific discovery and all that jazz. Or they kill him. That’s it. No one at any point seems to even think of suggesting that they could perhaps give Trog to some other institute that would be better equipped to deal with him. Nope. It’s either keep him or kill him. There is no middle ground and for the life of me I couldn’t figure out why other than the film is filled with a bunch of non-compromising bastards.

It also bothers me that the bad guys were, not just blatantly evil, as that’s something I could live with, but also glaringly obnoxious about their evil intentions. And it isn’t bad enough that they just want to get rid of the cave man, no; they also want to get rid of Dr. Brockton, too. Not because they disagree with her, but more because she’s a woman. And it’s not even that they want her gone in some sort of righteous, misogynistic way. They come across more like two eight-year-old boys who realized the shoddily constructed “No Girlz Allowed” sign on their club house could be easily knocked down with one well placed finger flick, but they only came to this conclusion after the club house had already been overrun, reinforced and padlocked by the very people they were trying not to get the cooties from in the first place, and they’re still very bitter about it. The movie seriously needed better villains, is what I’m saying.

Even Joan Crawford, arguably the highlight of the film (cause Lord knows it ain’t Trog), seems to have phoned most of it in. Her minimal effort is still loads better than most of the rest of the cast, but for a movie set in the English countryside she doesn’t even try to muster an accent. Aside from the occasional bark most of her role seems comprised of reactionary shots, which just give off the impression that she doesn’t really care at this point. And honestly, that may not be far off the mark. Trog does mark her last film role, so maybe at this point she really didn’t give a damn. With a movie like this, I can’t really blame her.

And as for Trog himself, the movies title character…oh, where to begin. Lets take a good look at him, shall we. 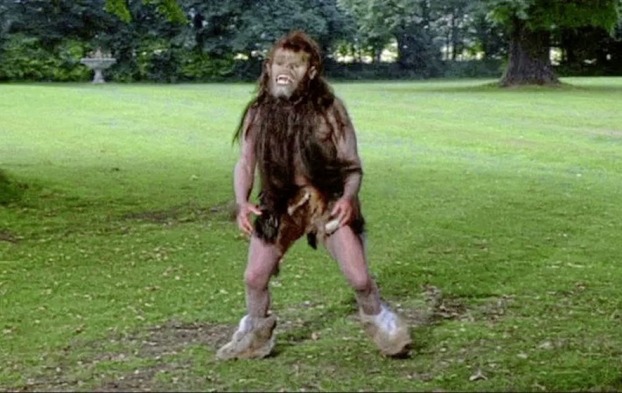 So you’ve got a guy in furry Uggs, a fur vest, fur shorts and an unrealistic ape mask. And with the ape mask you’d expect him to be covered in hair, but he’s not. Instead he’s mostly covered in hair, except for his skinny arms and legs, that remain inexplicably hairless. It’s just a weirdly cheap look overall. Though, I will say for a mask that looks like it was picked up off of the grimy floor of a run down gas station in the bad part of town it was surprisingly expressive. If they had put more effort into the costume from the neck down it might have actually turned out slightly memorable instead of laughably ludicrous.

As someone who admittedly likes a lot of sub-par films even I had to shake my head at Trog. Despite everything that takes place, the film meanders along at a sluggish pace as it pieces together equal elements of The Miracle Worker and Frankenstein. The ridiculous rampage montage at the end might have saved it with the giggle-inducing factor alone, but it was far too little and came in far too lake to make up for the ill-advised addition of tedious courtroom drama and the rest of the slog that was the bulk of the film. If it had had more man-beast rampage it may have come closer to the title of B-movie classic, but as it is it just comes off as a mish-mash of…. Well, sadness. Though, that does mean it makes for the perfect material to do your own personal riff of if you’re into that sort of things. So if you like MST3k style bad movies or just want to see Joan Crawford in her final film role than go ahead and give Trog a whirl. Otherwise, you can probably skip this.

Trog is available on a variety of streaming services.