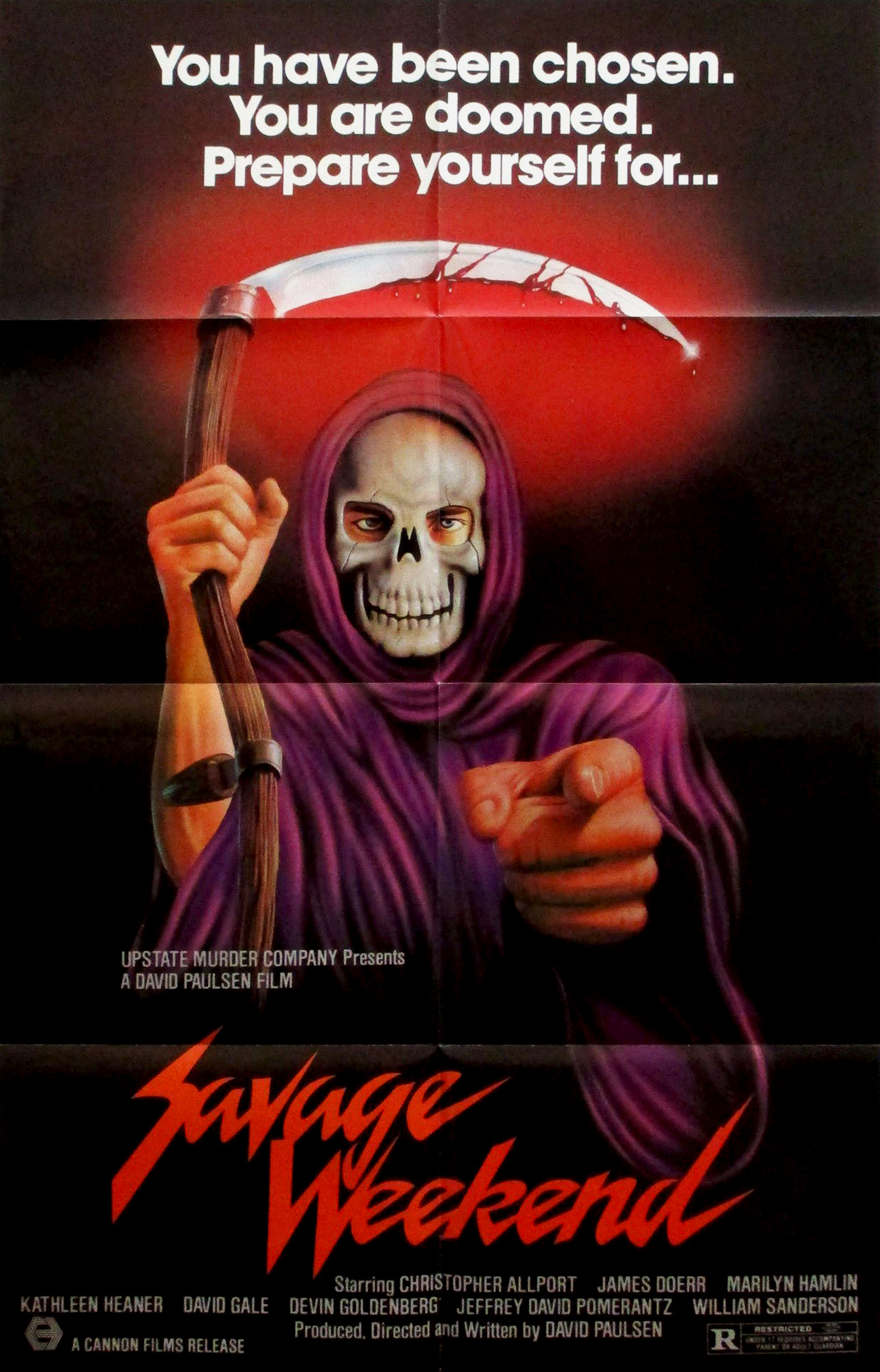 AKA: The Killer Behind the Mask

Marie, her boyfriend, her sister and two acquaintances, are off to the wilderness of upstate New York for the weekend. Marie’s recent ex husband has just been involved in a political scandal, and they all decided that the best course of action was to get away for a weekend of relaxation. Marie’s new boyfriend, Robert, just purchased a remote farmhouse that came with a barn and a partially constructed schooner, and Robert thinks this is a fine time to check on the boat’s progress. Unfortunately for the vacationers, not everyone is happy with Robert and his new acquisition, and it’s not long before the members of their small group start to get picked off by a killer in a ghoulish mask. “Oh, I don’t know. The mask is okay, but does this sweater make me look fat?”

Oh, strange and cheaply made horror slashers, where would we be without you? The simple answer to that is: likely watching a better movie. But the history of Savage Weekend carries just a little more depth. At first glance, Savage Weekend looks and feels just like one of the many early sleazy slashers that popped up after the success of Halloween. But — surprise surprise — despite the original release date, Savage Weekend was actually made in 1976, and predates the more famous films that popularized the genre, like Halloween and Friday the 13th, by 2-3 years, respectively. It was only finally released after the massive success of Carpenter’s classic. Yet despite that, it still manages to contain many of the familiar facets that other film’s of the genre would eventually standardize, like several tropes, many elements of the basic plot, the slow stalking, the mask, and the eventual “surprise” reveal. But just because it was a movie ahead of its time, doesn’t mean it doesn’t suffer from many of the same pitfalls that other, later films would fall into.

Yeah, yeah….It’s always funny before they put the mask on and stab you with something….

Despite all the film’s many, many (many!) pitfalls, I will say this for the movie, while there is a lot here that makes it seem as though it’s mimicking later films, it’s early jump into what would later become the slasher sub-genre means that, while some elements may feel familiar, the film instead had no preconceived notions of what a movie like this “should” do, because there really weren’t all that many movies like this to draw from. So instead of some sort of “copy-paste”, you wind up with a movie that feels incredibly familiar, yet sets its own, slightly bizarre rules, and ends up subverting your expectations. That’s not to say that the directions they go in here are going to be at all “surprising”, especially to slasher fans, but it does enough to not end up being too predictable, which is something to be thankful for.

Though it still ends up with a woman running through the woods in completely inappropriate attire, so don’t expect it to subvert your expectations too much.

It’s comforting to know that some things have remained the same since the beginning….

But alas, beyond beating the other slasher’s to the proverbial punch and its ability to not be too predictable, the film is otherwise unremarkable and surprisingly filled with familiar slasher tropes and clichés that would plague future films for years to come (it really WAS ahead of its time!). The characters may all be fully grown adults, as opposed to the teens who would soon come to over populate the genre, but like their future counterparts, most of them fit very familiar molds. There’s the sassy friend Nick, the suave, slightly pompous boyfriend Robert, the cocky jackass Jay, the slutty chick Shirley, and then we’re extremely blessed, because we get not one, but TWO hillbilly types that seem to revel in making the city-folk very uncomfortable. The only real difference in the cast is Marie, who doesn’t really fit the later molding of “the final girl”, and instead is simply merely a survivor of a horrific incident.

On the bright side, that means she’s old enough to pay for her own therapy afterwards.

Another thing linking this and future films together? The exorbitant amount of sex. In fact, I think this is some of the most sex and skin I’ve ever seen in a slasher, let alone such an early one. Hell, there’s so much nudity present here that if the film had added any more it might have qualified for a soft-core porn designation. Tops are torn off, sunbathing is done in the buff, and the camera awkwardly lingers on certain pieces of anatomy whenever a woman wears a swimsuit. With the exception of Nick, all of the main characters, have sex at one point, and the only woman with a speaking role who didn’t show any skin, either via sex scene, full/partial nudity or skimpy swimsuit, was a young Yancy Butler (Witchblade), and that was only due to the virtue of her only being 6-years-old at the time.

Suddenly the film thinks it’s “The City Girl and the Milkman”. Greeeeat.

I could forgive most of this if the story was just a bit more interesting, but unfortunately most of it ends up being rather dull and boring. Suffice it to say that story and pacing are not this film’s strong suite. It isn’t until the last third when the film finally picks up and becomes engaging. I’ll give the movie some credit, most of that build-up is spent on plot setup and some much appreciated character development. But for every decent minute the movie spends doing a good job of setting up the plot and characters, it seems to spend another 5 dawdling, dragging its feet with unnecessary additions, or missing the mark entirely. For instance, let’s consider Nick. Nick is the token gay character of the group, the unfortunate fifth wheel whose sole job seems to be to spy on people, cook, and provide the film with witty repartee. Nick is about as openly stereotypically gay as a character from the mid-70s can be, and while it’s nice that the film doesn’t hide that fact, it also doesn’t do a great job of necessarily portraying him in a good light either. He’s highly effeminate, but he lived in the Bronx, so he has no trouble beating up some local-yocals in a bar fight after they started to give him a hard time. So the movie implies to us that he can take care of himself, but then spends time on watching him spy on his friends and cook them dinner, before it lamely kills him off with little to no effort, after we watch one of the ladies give him a very oddly timed dance/striptease (which was laughable and highly amusing, but also incredibly random). So his characterization kinda ends up all over the map. But that’s really a pretty good summary of how much of the film progresses. It’s got a lot of good and even some interesting ideas, but it just feels like until it got to the end had no idea what to actually do with most of them.

They could have put a sign over him advertising his gayness and it still wouldn’t have been as effective as those shorts he was wearing.

Of course the New Yorker’s would figure out how to fit an impromptu cabaret dance into their evening.

I probably shouldn’t have to say so, but much like the rest of the film the acting here is all over the place, ranging from good to cringe-worthy. Poor Marilyn Hamlin is nearly painful to watch as Marie, and while James Doerr is a perfectly acceptable businessman, he’s also about as engaging as a piece of driftwood. Christopher Allport and Caitlin O’Heaney fare substantially better as Nick and Shirly, respectively. But it’s the locals played by soon to be veteran character actor William Sanderson (Blade Runner) and future Re-Animator alum David Gale that will likely be most noticeable, if only due to their familiar faces. For the most part the acting isn’t too too bad, but it had the potential to be substantially better, and Hamlin’s continued bouts with awkwardness do it no favors. It’s like she just realized how horrible everything’s been, but is powerless to stop it.

Finally there’s the visual and audio quality, neither of which are anything to write home about, though I will give the director credit for at least trying to make it look nice and be a little arty. If you’re lucky to come across a remastered version of the film, I would suggest that as your go-to, because the film quality of many of the other versions floating around are hit-or-miss. At some point no one gave word to the editor that the film was supposed to be in widescreen, so they didn’t bother to cut the top or bottom correctly. As a result, if you find a full-screen version anywhere, be sure to say hi to the uncredited sixth character of the film, Mr. Boom Mic. But sadly, no matter what version of the movie you watch, you still have to put up with some banjo music that is so obnoxiously irritating that it makes the theme from Deliverance feel like a production from the Boston Pops. So prepare your auditory set-up accordingly. Savage Weekend is sort of an odd enigma of a slasher. It’s so early in the genre’s lifespan that it has a lot of interesting and unique differences that set it apart from later films, and it surprisingly managed to predict a lot of elements that would become almost standardized among slashers. But the framing, the acting, and the pacing really drag it down. But it did start off with a great idea, that of a mature, adult filled slasher, that wanted to deal with adult issues and adult problems. Unfortunately, the way they handled most of it came across as terribly dull, and the audience is forced to sit through an hour of boring discussions about boats, sex, love and marriage before the pacing finally picks up, but by that time I’m sure a lot of people would have long ago lost interest. Oh well. It was a decent attempt considering the $58,000 budget. Slasher aficionados will likely get a kick out of it from a history standpoint, or just so they can say they’ve knocked another relative obscurity off their list. But if you’re just a casual fan looking for boobs, blood and chills then you’re going to be disappointed, as there is precious little of either of the latter two, so you’ll likely want to look elsewhere.

Savage Weekend is available on a variety of streaming services.

It is also available on DVD and Bluray as part of a multipack. 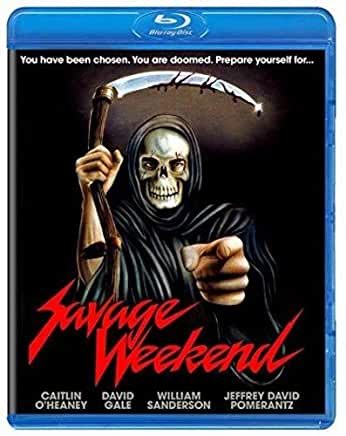