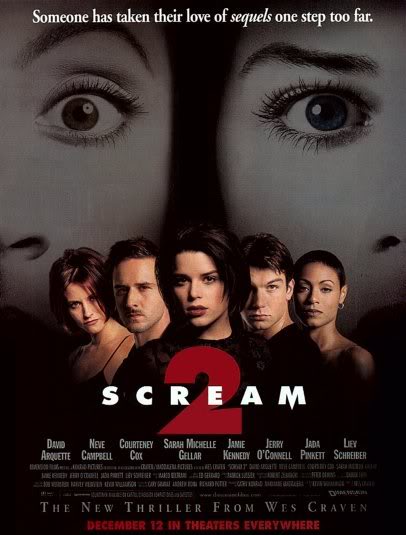 Sydney and company are trying to move on with their lives after the traumatic events and insta-fame inflicted upon them after the first movie. But once again, events from the past are coming up to bite them in the ass, in the form of a Ghostface wearing maniac wielding a knife.

You mean I get to stab more people? Sweet.

Moving on to the sequel. I gotta admit, when I first saw this movie years ago, I didn’t like it. I’m not saying I hated it or anything, but I just really didn’t like it. After the first one this one felt a bit flat to me. And honestly, it still does, for the most part. But I also know that many will probably disagree with me over that, and that’s fine. But that’s not going to keep me from disliking this one the most out of the three.

It’s not that the movie doesn’t have any scary moments. It does. It has moments that managed to make me jump, and that crashed car scene still makes me twitch with unease every time I see it. It’s also not that it has a poor script. I think it’s just about as witty as the first one. Nor does it have any kind of bad direction either (hell, it even has another Freddy Kruger reference). In fact, out of the first 3 films, I think it has some of the most beautifully shot scenes featured in the whole bunch.

I seriously loved this whole sequence. The plays I went to in school certainly never looked this good. They could have tailored her toga a bit, though.

Having put some thought into it, I guess subconsciously it’s the little things that I don’t particularly like. For one, you don’t care enough about the new characters. Yeah, most of them are there for the sake of being killed, but hell, I felt worse when Henry Winkler died in the last movie and he had a fraction of the screen time that some of the newbies here get. Even Sarah Michelle Gellar’s death did little to me and I really like her. 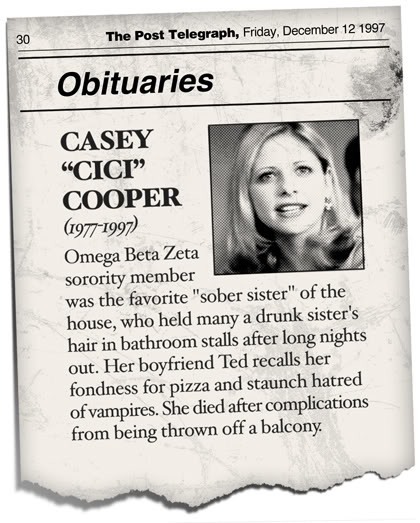 Not my image. But this fills me with more emotion than her actual death scene. Having her watch Nosferatu before getting wacked was a nice touch though.

Another thing that bothered me is they killed off my favorite character.

Sure he broke the movie rules, but we don’t learn that until later. As far as this movie is concerned he just did something stupid and wandered off by himself while taunting a pissed-off killer. Shouldn’t he have known better? He knew what happened last time. Stay in the middle of the crowed quad!

Not that he’s the only one who let a sporadic case of bravery get the better of them. Gale Weathers managed to do the impossible and find the one room on campus the killer couldn’t manage to get into….

What? The doors jammed and I’m protected behind unbreakable glass? I think I’ll stay right here.

Only to wander out and get shot for her efforts. I thought you were smarter than that, Gale.

The only new character that I did manage to feel sorry for was Derek. And really, how can you not feel sorry for Derek. Sure he was little more than one big gooey sap, but look at all the trouble the poor guy had to go through just because he wanted to spend time with his girlfriend.

First he’s trying to sooth a continually traumatized girlfriend. Then he valiantly tries to defend her, only to then be added to a long list of suspects. Some of them were more probable than others.

Yeah, can’t imagine why anybody would be suspicious of you, Cotton.

And that’s one thing they do well in this movie: Give you plenty of suspects. You’re suspicious of everybody right up til the end. They do a good job of keeping you guessing in this movie. Could it be the roommate? That would be unexpected. Or is it the film student? The wrongly incarcerated man? Did Gail finally snap? Could it be the boyfriend? No, that was done before. They wouldn’t be that cheap…Or would they?

The answer to that last question is no.

So despite my initial dislike, upon my more recent viewing I have to admit that this movie is better than how I initially received it. It’s still my least favorite of the original three films, but it does have some spectacular moments and for that I’m happily surprised.

Scream 2 is available on a variety of streaming services. 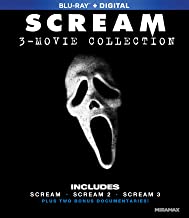