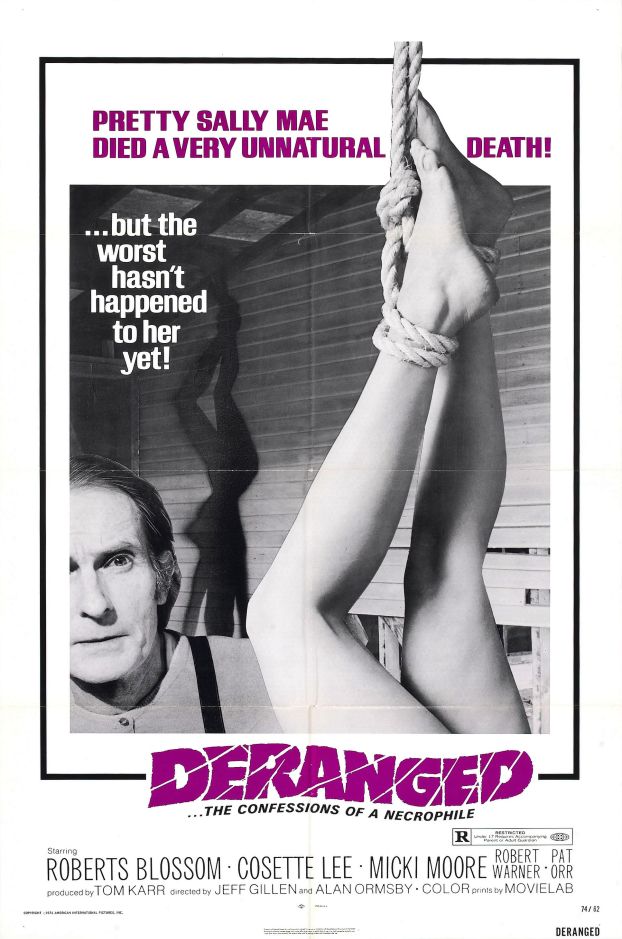 AKA: Deranged: Confessions of a Necrophile

Ezra Cobb is a quiet, middle-aged man, who lives a rather solitary life caring for his ailing mother, a religious fanatic who raised him to be a misogynist. But when his mother finally succumbs to her illness, Ezra suddenly finds himself alone with no purpose in life, having spent half his life as her caretaker. After a year of floundering and not knowing how to live without her, Ezra finally snaps under the pressure and goes to the cemetery to dig up her corpse. But a year of being underground has taken its toll, so to “mend” his still “ailing” mother, Ezra resorts to digging up corpses in an effort to reconstruct her decaying body. But finally having his mother back does nothing to ease Ezra’s loneliness, and as his delusions grow ever more severe he soon sets his sights on living, breathing victims.

Deranged is a psychological horror, American/Canadian co-production from 1974. The film was funded by American music producer Tom Karr, who had long held a fascination of American serial killer Ed Gein. Karr funded the entire film himself, giving it the rather meager budget of $200,000, from money he made promoting the concerts of bands like Three Dog Night and Led Zeppelin. So if it ever comes up, you can now answer the Trivial Pursuit question of what horror film Led Zeppelin inadvertently financed. But don’t let the film’s small budget and rather strange beginnings throw you off by making you think the film is just some sort of quick cash grab to take advantage of one man’s odd obsession. No, Mr. Karr, it turns out, knew what he was doing. Though it was shot on a modest budget, Karr hired some rather talented individuals (including writer Alan Ormsby from Children Shouldn’t Play With Dead Things) to create a remarkably entertaining and accurate portrait of one of America’s most enduring, and notorious, serial killers.

Movies about or loosely based on the exploits of Ed Gein have been produced (and will likely continue to be produced) for years. Texas Chainsaw Massacre, Psycho and even Silence of the Lambs, all contain elements that are inspired, at least in part, by Gein’s atrocities. But Deranged was the first one to really be based on the real story. I say “based”, of course, because the film is not, and in no way purports to be, any kind of biopic. There are a number of things the filmmakers changed from Gein’s story, either to add to the dramatic tension, for cinematic clarity, or just because they felt like it. Yet the film’s events also mirror the real life facts so closely that while it may not be accurate enough to consider it a biopic, at the very least it could be considered a love-letter to Gein’s actual life. Everything from Ezra’s wardrobe, to his house, and even the last item he purchases at the hardware store that ultimately leads to his arrest (it was antifreeze, for those curious) are carbon copies of Gein’s life and the events leading up to his arrest. Even the movie’s brutal and bloody climax are based on Gein’s final murder, a fact which actually makes Ezra’s gruesome acts all the more terrifying. The filmmakers may not have included every element of Gein’s evil deeds, but there’s enough here, including grave-robbing, human body suites, and flesh-based household items, that you’re given a pretty accurate portrait of the serial killer’s actual crimes. As for the crimes themselves, they’re all suitably horrific and disturbing, especially through the lens of a typical 70s exploitation filter. The atmosphere is unbelievably dark, and though the film is expertly shot, the added layer of grain and dirt and grime help add to the appalling realism. What doesn’t help, and is likely to take you out of the movement for a bit, is the use of the 70s staple of unrealistic bright red blood for every death scene. But while that may be distracting, the effects themselves are actually quite well done, especially for such a low budget affair. You can thank famed FX wiz Tom Savini for that. Deranged was actually one of the very first film’s he worked on. So excluding the odd out-liners, like Ma Cobb’s wig outline being painfully noticeable, all the effects work here is highly impressive.

I guess they were hoping no one would notice? The film also blissfully lucked out in the acting department as well. Everyone fits their roles quite suitably, even the victims and the occasional side character. But the highlight of course is Robert Blossoms as Ezra Cobb. Blossoms is just phenomenal, and brings a real believability to a character who’s real crimes were so heinous that they almost defy belief. Yet at the same time he also manages to garner some sympathy, successfully conveying Cobb’s loneliness and isolation, and how those emotions and his upbringing factored into his crimes and delusions. He does such a good job that you almost feel sorry for him.
But only almost. The one downside of the film is it’s odd insistence of a rather clumsy framing device that consists of a narrator (Leslie Carlson), here portrayed as an investigative reporter, who just “pops!” up sporadically throughout the movie, both to offer his two-cents and to add further story elements. And I mean he quite literally just appears, without warning, and ponders about the inner workings of Ezra’s mind and of the other characters in the film. It’s simultaneously strange and almost quaint, seeing him suddenly materialize out of thin air, sitting or standing near Ezra while the little serial killer remains oblivious and goes about his day. If his involvement was more consistent, I might feel differently, as the film often goes long stretches without him, to the point where you almost forget about him until BAM! There he is again. But as it stands, I can’t help but think that the movie would have been much better off without him.

Ezra’s peripheral vision must be outta whack along with the rest of his head.

Deranged is a bit of an odd movie. It almost feels like a cross between a true life docu-drama and an art film. It’s well shot, well acted, well told, and filled with so many real-life facts that it could almost be a documentary. Hell, I’ve seen movies who tout “Based on actual events” that didn’t feature nearly as many accuracies as this film did. However, I can’t help but think that the bright-red blood and the sporadic narrator are going to be a bit divisive. Viewers will likely either find their inclusion quaint or distracting. But beyond those two downsides, the film ends up being a very strong psychological horror that deserves more recognition than it currently has. Slasher fans will likely find it pretty tame, but I’m sure those interested in serial killers will find it quite fascinating.
Deranged is available on a variety of streaming services.
It is also available on DVD and Bluray.