AKA: Hospital Massacre
AKA: Ward 13
AKA: Be My Valentine
AKA: Or Else

Poor Susan Jeremy has a traumatizing background. While visiting her friend David as a child, Susan receives a valentines card from Harold, the strange class outcast. Susan and David have a good laugh over the card and toss it, not realizing that Harold is at the window, watching their every move and seething over Susan’s rejection. When Susan leaves the room, Harold breaks into the house and kills David, leaving his corpse hanging by the eye from a coat hanger for Susan to find when she returns to the room….

Nineteen years later and Susan is grown, newly divorced, has a daughter of her own and a new fiance named Jack. She also has a new health insurance plan that required her to get a new physical a couple of weeks ago. So she heads off to the hospital to get the results of her routine tests. But while she’s there her visit is sabotaged by an unknown assailant in medical garb who surreptitiously kills her doctor and alters her medical reports in order to trap her in the hospital under the guise of ‘observation.’ Susan quickly suspects something is dangerously amiss, but whoever altered her reports is dead set on preventing her from leaving, even if that means killing any and everyone who tries to help her or comes close to figuring out the truth. 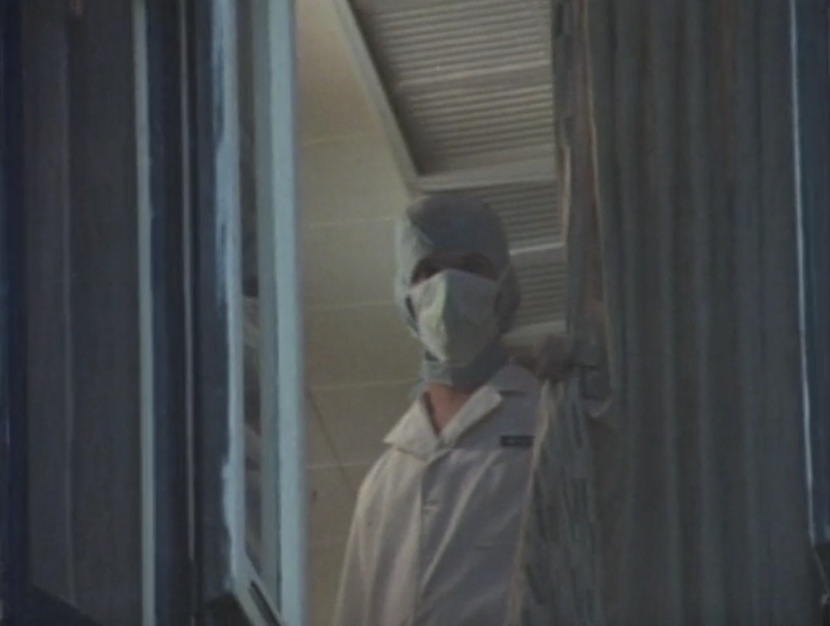 Aw, crap. Was this the inspiration for that Last Slumber Party guy? Lame.

X-Ray (or Hospital Massacre) is an early American slasher from 1981. It can technically be considered a holiday-themed slasher, thanks to the opening and the Valentines banner hanging in the hospital lobby. So if you’re a slasher fan looking for more holiday-themed fare, rejoice you bloody little hellions, for now you have something else to watch on February the 14th other than the standard My Bloody Valentine’s double feature. Again, technically, because beyond that the holiday holds no significance to the actual plot. Instead the film is mostly an excuse to string together some imaginatively violent, medical-related death scenes. And it succeeds at that fairly admirably. Where it doesn’t succeed is in nearly every other aspect. Because while it may be labeled a horror film, some features are just so ridiculous, either intentionally or unintentionally, that the film almost feels as though it’s trying to be a comedy…. And maybe it is. I don’t know, because it really doesn’t go out of it’s way to try to make a lot of sense. But while much of the film is quite confusing, that doesn’t keep it from still being surprisingly fun.

Well, fun for some of us, anyway.

I know that I’ve already ragged on it a but, but before I get into the movie’s more bizarre elements, I do want to emphasize that the film does actually have quite a few strong points in its favor. The most obvious is, of course, the very brutal and memorable death scenes. Now, I’ll be honest right up front, some of the hardcore slasher fans aren’t going to be too pleased with these, because although the scenes are pretty vicious, they’re also not particularly bloody or gory. So even when you have scenes of the killer slicing off a victim’s head with a bone saw, the scene is filmed in such a way as to obscure most of the brutality, like cutting away at the last second or, in the case of the bone saw, covering the scene with a cloth divider so that you only see a silhouette of the action. That said, all the murder scenes are all very well handled and shot, utilizing smooth editing, interesting angles, and in some cases very curious concepts. But being decently shot doesn’t save any of them from falling into the film’s ever encompassing propensity for weirdness. The most memorable of such moments is probably the least bloody, and involves the killer coming at the victim from one end of a long hallway while gloriously silhouetted (thanks obvious spotlight) against a large sheet that he’s holding up in front of him in such a way as to obscure the rest of the hallway. It’s just one of the film’s “interesting visual, but bizarre concept” moments. Like, what was the thought process behind this one? Was he trying to make a ghost costume and he just ran out of time? Was it an obscure “Ignore the man behind the curtain” joke? I’ve no idea. But it’s the kind of thing that sticks with you, if for no other reason than the whole idea just being so ridiculously ludicrous. 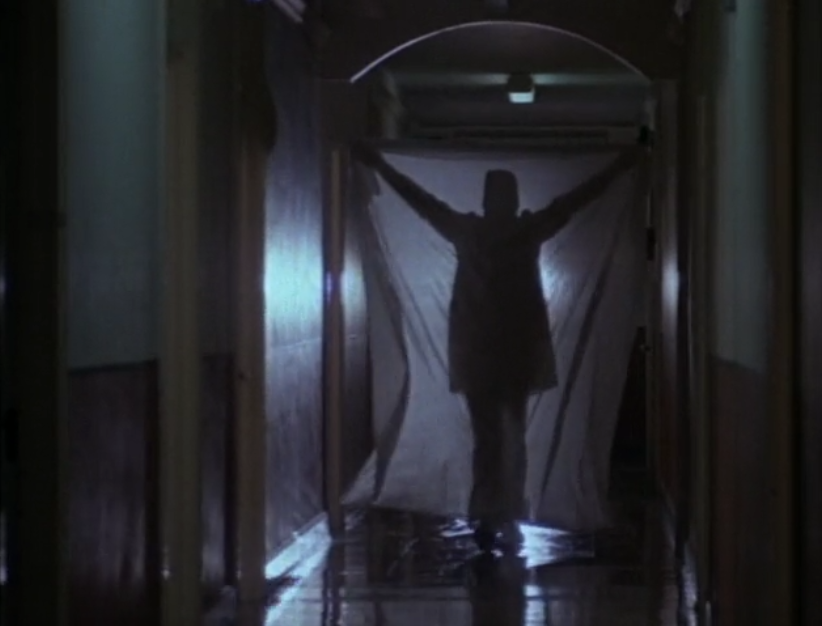 Like, seriously dude, what was the thought process going on here?

But really, that scene is just par-for-the-course in a movie that’s just filled to the brim with peculiar oddities. I honestly don’t know where to start with this film. The story itself is easy enough to follow, as long as you turn your brain off for the whole duration so you don’t have to contemplate the wide array of assumptions and coincidences that have to take place in order for the plot to be even remotely functional. For instance, though we don’t know exactly where the film is set, it’s in a big enough town to have a fairly large hospital. It’s not huge, but it’s decent enough in size to have at least 9 floors. Yet the entire building seems to be almost criminally deserted, with only a handful of patients and staff seen in the entire building. And I guess the management must be in dire financial straits, because all the hallways are either pitch black or dimly lit (assuming of course they aren’t being strategically illuminated by spotlights). But I guess financial woes would explain why the staff physically forces Susan to stay there against her will, at one point physically dragging her back to her room when she peacefully tries to leave. Maybe they got confused by the handful of clearly mentally disturbed patients they had wandering the halls and thought they were in some sort of insane asylum, and thus had the unfettered power to involuntarily commit people. Though I’m pretty sure that’s not a thing with physical ailments? It’s certainly not a thing I’ve ever heard of. I’d tell her to sue, but the killer conveniently slaughtered all the people who illegally committed her, so there might not be much of a point now. 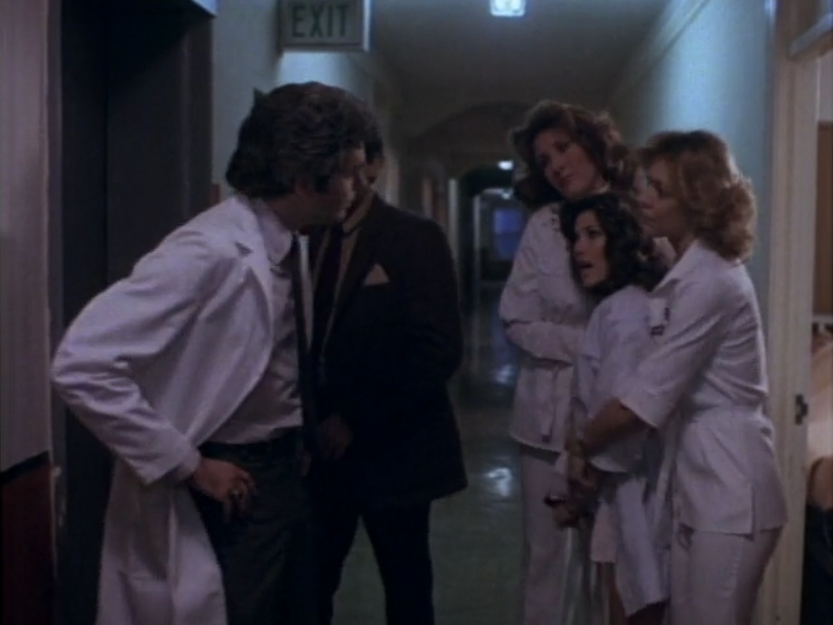 Admittedly extreme, but possibly the quickest way out of this hellhole of a hospital.

And that doesn’t even begin to touch upon the ridiculous characters in this film and how they behave. The movie tries to excuse away the entire plot as basically being the product of an incredibly clever killer (with zero peripheral vision), but really it’s reliant on the fact that just about everyone in the film is either an asshole or an idiot. None of the (admittedly few) patients seen seem to have any normal ailments. They instead spend their time harassing the main character to various degrees, getting drunk, or wandering around looking like they do indeed belong in a mental ward. All the doctors not only come across as perverts, but are also highly unprofessional to boot, since not a single one of them seems willing to tell Susan what’s supposedly wrong with her. They just shove her in a room for some so-called “emergency observation” and then don’t bother to do any actual observing.

Except for this scene, which involved far too much observation…

And when characters aren’t doing anything pervy or ethically questionable, they’re doing something supremely stupid. A main point of the plot involves the fact that the 9th floor of the hospital is closed off because it’s currently being fumigated, something we’re told early on when Susan hit’s the wrong floor of the elevator only to be greeted by three masked, leering gentleman who tell her the floor is closed and highly toxic. So the whole floor is covered in a yellow, almost dreamlike smokey haze for the entirety of the film, and it’s naturally the perfect place for a crazy killer to do some medical murderizing. But I guess no one bothered to tell any of the patients or staff about the floor being off-limits, or post a memo or a sign, or do literally freaking anything, because no one, doctors included, questions when the faceless PA box tells them to go to the Ninth floor, nor do they bat their quickly irritated eyes when they come into contact with the yellow vapors. They just dutifully go up into the yellow death haze to die as if it’s no big deal. I swear, other than Susan no one in this film operates in any logical way, and that poor dear gets labeled crazy the second she tries to point out things are amiss. I can’t tell if the levels of crazy in that place were so high that any type of logic seemed foreign to them, or if the toxic fumes from one floor up were seeping into the rest of the hospital’s air supply.

What is this strange vapor? It burns my throat and hurts my eyes…Almost like I shouldn’t be up here…

The only people in the whole hospital following any kind of proper safety procedure.

I’m still not sure what X-ray was going for. As a horror film, it’s actually kind of dull. The movie looks and sounds decent enough, but there’s very little blood or gore, and no real tension to speak of. Hell, the most frightening thing about the film is how easy it was for a hospital to essentially kidnap a woman and how every male that comes in contact with Susan stares at her as if she’s the first female they’ve ever encountered in their entire lives (Seriously movie, I know Barbi Benton is a beautiful woman, but you could have dialed that back a few notches and still easily gotten your point across.) And then there’s the completely illogical plot filled with unethical doctors, an empty hospital, crazy characters, and an insane killer where the movie can’t seem to decide if he’s a maniacal genius or a sightless oaf. But despite all that it still manages to be surprisingly fun in a completely bizarre way. Between the gratuitous examination scene, Susan’s three, highly critical roommates who all seem to be suffering from yellow-haze induced dementia, the sheet-fueled death, and a room full of traction patients who all start suddenly wriggling as if they were all simultaneously possessed, the film is not lacking for any kind of amusement. Slasher fans may be disappointed by the oddities and lack of blood or gore, but if you’re a fan of 80s films and strangeness and you think of it more as a highly peculiar art film, then you may get more enjoyment out of it. At the very least it’s a fun ride, even if for only one viewing.

X-ray (or Hospital Massacre) is available on a variety of streaming services, including for free on Tubi TV.

It is also available on Bluray, as part of a double feature with Schizoid. 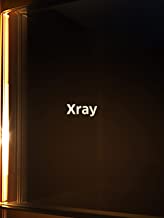