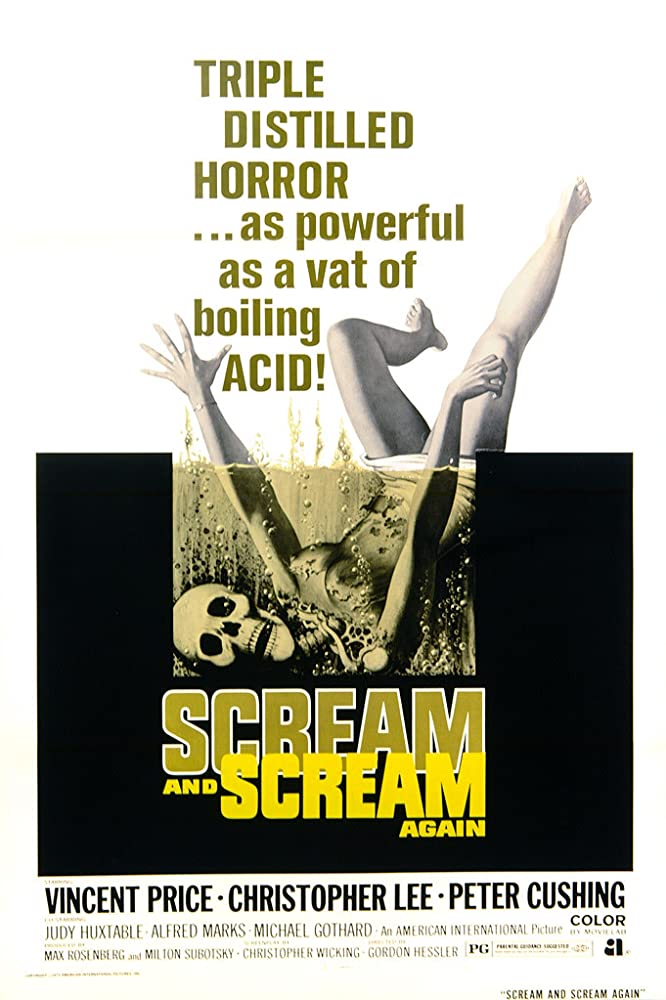 A jogger in London passes out during a run and wakes up to a silent, uncooperative nurse and the realization that he’s had his leg amputated.

Meanwhile, Konratz, a military man returning to his unidentified home country that’s currently under the rule of a military regime, is seen slowly killing off his superiors so that he can shuffle himself and others into positions of power.

Meanwhile still, back in London Detective Bellavar is on the trail of a suspected serial killer who rapes and brutilizes women before savagely killing them and draining their blood. The detective manages to track down the killer, but his unprecedented strength helps him elude them for several miles. Finally cornered, the suspect opts to escape via suicide by jumping into a vat of yellow acid located in a barn owned by local eccentric scientist, Dr. Browning.

What do all these events have in common? No one knows, but the local medical examiner’s assistant is intrigued enough to try to find out.

Yes, regrets for his curiosity were had.

Scream and Scream Again is a 1970 British outing based on the book The Disorientated Man by ‘Peter Saxon’ (a pseudonym) and brought to you by Amicus Productions. Touting actors like Vincent Price, Christopher Lee and Peter Cushing, the film likes to bill itself as a horror flick, but it’s really more of a spy/conspiracy thriller with a few elements of horror thrown in for good measure. One would think that with all that included talent the movie would be more well known, but up until a couple weeks ago I was barely even aware of its existence, let alone that it included the talents of some of my favorite horror actors. But the more I watched the movie the more I realized why this one had fallen into the annals of cult classic status. The number one thing that’s going to cause the movie to either be a hit or a miss with viewers is the disjointed storyline. The viewer is initially given three seemingly unconnected plots (the jogger, the search for the killer, and the military intrigue), and the film ping-pongs between them before finally merging them all together in the final act. Fragmenting a story like this is a technique often used to build a sense of paranoia and keep a viewer on edge, but for a good 3/4ths of the story all the various viggettes seem wholly unrelated and feel more like a chaotic mess than a coherent story. Thankfully, everything does come together in the end, when the three separate plot threads are woven together in a nice, neat little package. But after all that previous chaos, that neatly wrapped package almost feels less like a well deserved ending and more like just a quick and convenient way to end the film. Perhaps if they had more masterfully woven together the plots it would have felt more satisfactory, but as it stands I can’t help but feel that a lot of people are going to walk with a sense of detachment. Other than that, the movie is quite solid. The fractured story gives the film an almost nervous-like energy and keeps the movie going at a very brisk pace. Scenes move from one to another in quick succession and are often complemented by bright visuals and engaging set pieces. The standout moment is likely the 15-minute long, well choreographed, high-speed chase between the police and their murder suspect, which takes the viewers on a miles long treck through some of Britain’s windy, turny country roads… only for the suspect to escape by ripping his handcuffed hand off at the wrist and for the chase to resume again! Though you may often not always know what the hell is going on, let it not be said that the film is boring.

Okay, the club parts were a little boring if you hate Beatles knock-off bands… Though viewers brought to the film by the big three names attached to it will largely be disappointed to find out that Price, Lee and Cushing don’t share any screen time, that doesn’t mean that their performances or the performances of any of the other actors are anything to sniff at. Price hams it up as only he can as the dutiful mad scientist. And while Lee and Cushing’s involvement amounts to little more than a couple of cameo roles (I’ve been robbed!), they still maintain a proper air of menace and grace for their respective roles. He’s always such a dapper SOB

Along with the notable three, the film is also graced with the talents of horror movie veterans Peter Sallis (Taste The Blood of Dracula), Yutte Stensgaard (Lust For A Vampire), Christopher Matthews (Scars of Dracula, Blind Terror), and Michael Gothard (The Devils). It also boasts the talent of comedian Alfred Marks as Detective Superintendent Bellaver. Marks’ talent is a standout, and not only for sheer virtue of being given the most screen time. His grizzled detective adds just the right amount of cynicism and sarcasm to what could have easily been a most dark and dower plot otherwise.

Scream and Scream Again sounds like it’s filled with a bunch of nonsense… and it is. But that shouldn’t be surprising, as the book it was based off is basically pulp-fiction, so in that regard I’d say it nailed it’s source material. It’s a high-paced film filled with good performances (the slight con of casting aside) and fun setpieces, but whether or not you get your mileage out of it will depend on how well you react to the bizarre composition. If you can get past the uneven story, and you like mystery, horror or intrigue, then the movie might end up being a fun little ride.

Scream and Scream Again is available on several streaming services.