Modern day witch, Elaine Parks, just wants to be loved. So she concocts a series of love potions and gives them to men she finds attractive in the hopes that they will fall in love with her. As a testament to her skill, Elaine’s potions work splendidly and the men she gives them to become hopelessly infatuated. But unfortunately for Elaine her plan backfires and her efforts for affection do little more than end up leaving corpses in their wake.

Not one to be deterred, Elaine sets her sights on her next potential suitor, the dashing Detective Griff Meadows. Elaine is convinced that Meadows is the man of her dreams. But her questionable past is about to come back and haunt her, giving her a rude awakening when it comes to her fantastical notions about love and romance.

And those fantasies are creepily specific.

The Love Witch is a 2016 horror/comedy that was written, directed, produced, edited and scored by Anna Biller, an independent American filmmaker from California. She also had a hand in constructing props, creating costumes, and designing, building and painting the various sets. With all that work, it took Biller about 7 years to complete the film, and the finished product is a striking testament to her, the cast, and the crew’s dedication to make a modern take on the 1960s and 1970s thriller with a Technicolor flair. The very first thing one notices about the film is the aesthetics. It’s visual stylings are a love letter to the brightly colored films of the Technicolor age and the horror films of the 1960s. The costumes, the framing, the oversaturated colors, and the shifting of focus, are all reminiscent of the style of decades past (minus the grainy bits). Everything here is crisp and bright, with a strong focus on contrast and on red, blue and yellow hues. Often the only dark element of the film is Elaine herself, in a move that, I’m sure, is meant to highlight her hidden darkness within, despite her frequent smiles and forced bubbly persona.

But don’t let the film stylings fool you. The movie is decidedly set in modern times (around 2016), so while the film may often look like it’s from the 60s, the illusion gets a bit shattered once a character goes and whips out a cell phone. So just keep that in mind when someone’s driving around in an old red sports car and you spot an SUV in the background. It’s not an error, it’s intentional, which almost makes the entire production feel very surreal, as if Elaine (and perhaps the rest of the cast) are living in a fantasy world, completely disconnected from reality.

They start off by throwing in a little Hitchcock…..I approve.

Did we just drop into a scene from My Fair Lady? Weird. Of all the houses in all the world you had to….pick the perfect one for a witch. Kudos. If you’re the kind of person who has an aneurysm every time you spot a car that’s not in the ‘right’ decade this film may drive you mad.

At the heart of the film lies Elaine herself, and her cavalcade of confidence and contradictions. Elaine is poised and beautiful, speaking in soft tones that could be interpreted as either sultry or caring, depending on the circumstances, and as a self proclaimed ‘modern’ witch she has no problem using sex as a tool if she thinks it’ll help her get what she wants. Yet despite her insatiable need for love, her ideas about sex and gender keep her traped in a repeatable magmire of disappointment. Elaine has a set idea of what her ‘perfect man’ is and we learn, through a series of audio flashbacks from her father and ex-husband, that she has essentially reconstructed herself into, what she perceives, is a man’s ultimate fantasy, which basically boils down to a more provocative and errotic version of a 1950s housewife.

What she herself never considers is that the men she lures into her web are themselves projecting constructions based on societal expectations. And once they let their guard down, once they let the constructed stoicism and machoism drop and let their emotions and vulnerability come out (ironically, once they exhibit reactions most socially perceive as ‘femminine’) Elaine loses all interest and drops them like a hot potato. Towards the end of the film she states, “They teach that a ‘normal’ human being is a hyper-rationalist, stoic male, and that a woman’s intuitions and emotions are illnesses that need to be cured.” never once realizing that she herself, unconsciously or not, is perpetuating the very teaching she’s scorning.

Irony, thy name is Elaine.

Oof. I can tell that one’s a dud right off the bat. Throw him back.

Yet despite this and the fact that she’s essentially The Black Widow of Desire, Elaine never comes across in any way as mean spirited. Naive in ways, sure, but not outright cruel. This is in part thanks to Samantha Robinson’s performance. Robinson is simultaneously soft and commanding, her style veering towards the more classically trained, almost like one would expect of a lady in the old English courts. As such, Elaine always has this air of sophistication and innocence about her. Which is an impressive feat, considering that she manages to keep said air, even long after she’s started racking up a body count.

I ended up really liking The Love Witch. The whole production is a work of love and it shows. It’s lovely to look at, it’s appropriately acted and the underlying feminist themes are facinating. So not only is it an entertaining story about an unintentionally diabolical killer, but it also dissects gender politics if one wishes to look below the brightly colored surface. It’s unhurried pace can make it feel a little slow at times, but for those who like thrillers and throwbacks this should be an interesting watch.

The Love Witch is available on a variety of streaming services. 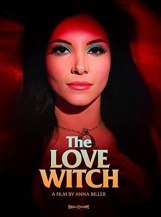