Tomatoes have inexplicably gained not only sentience, but also increased size and a penchant for human flesh. The government and army seems powerless to stop this rolling threat, but they simultaneously don’t want the public to know about it either. So the President sends out two men to head off this increasing threat to national security and public image. The first is Press Secretary Jim RIchardson, who is tasked with convincing the public that no credible threat exists. The second is agent Mason Dixon whose mission, along with his team, is figure out a way to stop the squishy red rampage. Bringing up the rear is Louis Fairchild, a reporter eager to break the story of deadly rolling fruit to the public.

Attack of the Killer Tomatoes is a low-budget spoof of the notoriously cheesy horror/disaster films of the 1950s. One can think of it as the Airplane! of horror movies, but with a decidedly smaller budget and less noteworthy cast. Some have lumped it in with the plethora of ‘so bad it’s good’ films, but that assumes the film was trying to be good in the first place. It was not. This is a film that knew full well what it was and reveled in it.

For starters, the plot is absolutely ludicrous, and it’s meant to be. The government has somehow created killer tomatoes and, for some reason, can’t seem to stop it. So they put together two teams of some of the most unqualified individuals in existence to stop their plague of killer fruit. This includes a disguise expert, a Russian swimmer, an underwater expert (AKA a SCUBA diver) and a mentally unstable paratrooper that wields a saber and carries his open parachute around from the moment he arrives on screen. There’s also a subplot about incompetent reporter running around and several scenes dedicated to fighting a corrupt government. If none of that seems to tie together in any way, then I have good news for you. Because you’re in luck! It’s not meant to make sense. The plot is really just an excuse to string a bunch of corny jokes together. The comedy is abundant and all over the place. There’s everything here from the subtle to the overt. There are sight gags, slapstick, physical comedy, subtle nods, meta humor, musical spoofery…the list goes on and on. Some of it is meant to be mocked in-universe and some of it involves real-world references. There’s really something here for everyone, and the jokes come at such a fast pace that sometimes one joke starts before the previous one has ended. So if most of them don’t click, that’s okay, because you’re really not given much time to think too much about it before the next one starts.

Don’t mind him. He’s just pointing to the joke that literally flew over her head. And that’s largely how the movie tries to keep the viewer on their toes, because beyond the bombardment of jokes, the movie is really hella boring. If you go into this film expecting the tomatoes to help lift up the plot in some way, then you will walk away very disappointed. I can’t speak regarding the sequels (yes, there were sequels), but in this film the tomatoes are largely used as a background element. Every three of four scenes they pop up, but their appearance doesn’t really seem to have much to do with keeping the viewer’s interest. Instead they just seem to appear as a way to remind the audience that they’re still there (and occasionally growing.) In between the tomatoes and jokes the plot primarily revolves around political intrigue, and as soon as those scenes show up, strap in folks, because they cause the film to screech to a dead halt. On top of being maddeningly dull, the scenes are also overly long and contain surprisingly little plot in a film that already doesn’t have much going for it in the way of plot. I don’t know what the intention was here, but it seems to have the unintended effect of numbing the brain and making people forget what just happened. Hell, despite having just watched it I still have no idea what went on in those scenes other than having a vague idea of who was present in said scene.

As for the acting, it is all appropriately cheesy and over the top. The standout is probably Stephen Pace, who plays the looney Lt. Wilber Finletter. Not only did he get dragged behind a car, but at one point he spent a whole scene chasing down a suspect while wearing a full flight suit and dragging his parachute around. Both moments are completely ridiculous, but as goofy as it is I must give respect to a man who was so fully committed to his role that he was inadvertently knocked unconscious when he was accidentally flung into a car as he was being dragged down the street by a car.

So is Attack of the Killer Tomatoes any good? If you like ridiculous comedies, sure. The film is clearly stupid, but that’s by design, not by accident. The plot doesn’t make a lick of sense, it’s got some plodding moments, and it’s never made clear how in the world tomatoes are killing people, but this isn’t a movie you watch for the plot. This is a film you watch because you wonder just how dumb it can get, and in this case, the answer to that is very, very dumb. Sure, all of the jokes won’t be for everyone, but the movie’s approach to comedy of ‘throw everything against the wall to see what sticks’ means that you’ll likely find a couple things here that you can chuckle at.

Attack of the Killer Tomatoes is available to watch on Amazon Prime and Tubi TV. 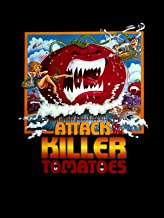 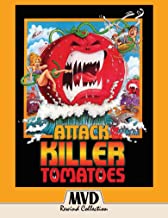