I was hoping for a better poster designs. This is the only one I don’t totally hate.

Near Dark starts off with Caleb Colton, a young cowboy-wannabe. Caleb meets his friends in town one night and they spot a skinny, young, ice-cream cone eating Mae. Young Caleb makes his move and the two of them spend the night driving around town, with Caleb intermittingly trying to awkwardly get a kiss.

I don’t think Caleb gets out much.

When Mae becomes panicked about the idea on not making it home before sunrise, Caleb drives her there, but not before being a bit of a dick and stopping in the middle of the road to demand a kiss from his very agitated passenger only a couple of miles from her destination. Caleb gets what he wants along with a bonus: She bites him on the neck and then flees the truck.

He runs after her, but can’t catch her. Not being able to get his truck started again he starts walking home, a treck that slowly gets more and more difficult for him as the sun slowly rises. First his pace slows, then as he gets weaker he starts stumbling, and finally he literally begins to smoke as he makes his way across the empty fields. 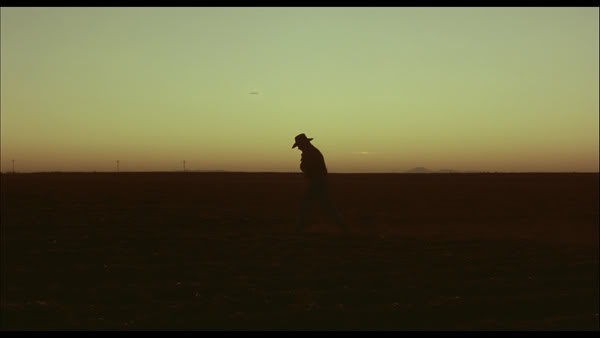 Yes, I know there’s no smoke, but he’s mere minutes away from bursting into flames at this point. Trust me.

His father and younger sister spot him trying to stumble his way home seconds before a old beat up RV tears across the field and snatches him right off the property. This is Mae’s “family” a clan of roving vampires consisting of their hardened leader Jesse, his mate Diamondback, the wild Severen, and the vampire child Homer.

Caleb is not welcomed into their ranks with open arms. He was supposed to be prey and was instead accidentally turned. The others are ready to kill him, but Mae insists that he can be inducted into the group and taught their ways and is given a week to teach him. Terrified and not comprehending what’s going on, Caleb tries to return home, but has to abandon his journey when the lack of blood makes him so ill that he has no choice but to return to Mae. 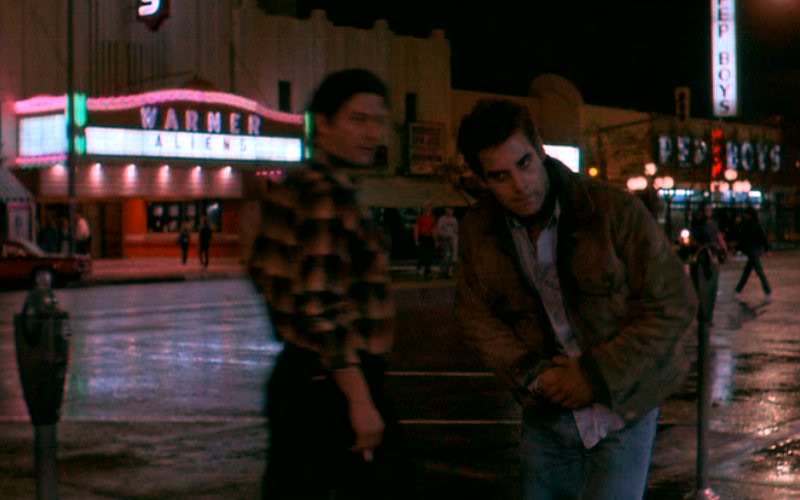 Caleb does a lot of stumbling around in this movie….Notice “ALIENS” on the marque. It was filmed one year earlier by the directors soon-to-be husband. Paxton, Henriksen, and Goldstein (Diamondback) all stared in it *wink*

Try as she might though, Mae just can’t get Caleb to summon the gumption necessary to kill in order to feed. He comes close on two occasions, no more so than when the family takes out an entire roadside bar and practically hands him a sniveling pool player on a silver platter. But Caleb lets him go, creating a terrified witness and leaving the family vulnerable. Meanwhile Caleb’s family is taking part in their own frantic hunt, relentlessly searching the highways and gas stations for any signs of him. 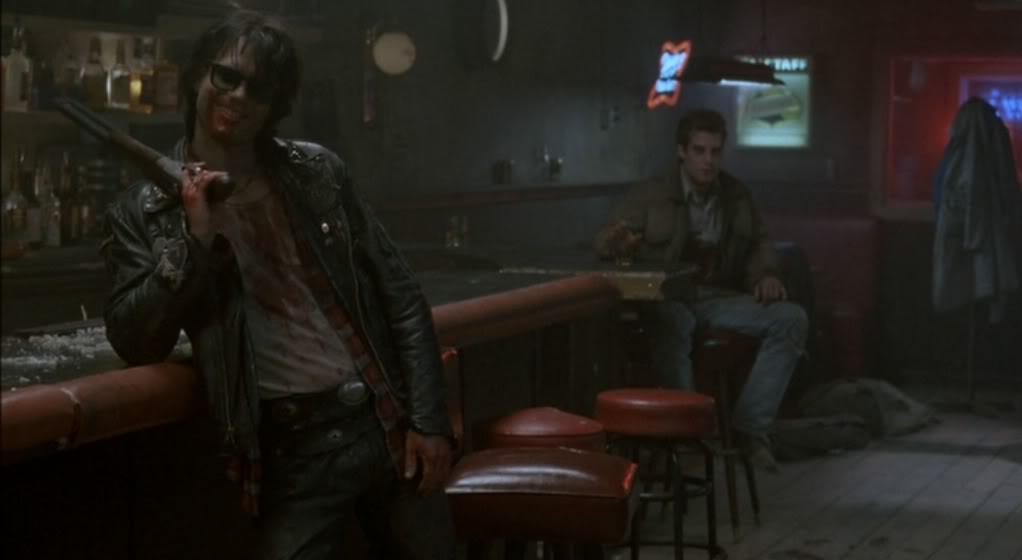 The whole scene was a big, bloody mess…But probably really no different from any other Friday evening.

Near Dark is an interesting mixture of the western and horror genres and the film surprisingly blends both together very well. The sparse, desolate, ill-lit western landscape is imbued with a feeling of menace that lends itself well to the more horror driven aspects of the plot.

The running theme of the intrusive outsider is also very prominent. Caleb is an unwanted outsider within his new “family”, a family that is itself composed of nothing but outsiders, too different from humanity to ever even consider to try to fit into human society again. And yet Caleb still tries to fit in, while at the same time desperately clinging to what’s left of his humanity, pushing him even further away from the only people who can understand him now.

The first thing I noticed about this movie was the terminology used. Like Ganja and Hess the term “vampire” is never used. Instead the vampires describe themselves as “sick”, “different” or “not normal.” Another thing that will be very noticeable to any vampire fan going into this movie is a serious lack of fangs. Fangs are not present. At all. There are several were the characters are seen giving close-ups with their big, toothy grins and it becomes very obvious that there is a lack of big, pointy teeth.

Yet the lack of fangs does not make these vampires any less dangerous. Each one of them has their own callous disregard for life. Jesse is an old Confederate veteran, ambushing victims with Diamondback and then implementing a sort of scorched earth policy as they leave. Homer is a bitter, hard, unsympathetic old man trapped in a child’s body and resentful because of it. And Severen…well, Severen’s just old-fashioned crazy, delighting in terrifying, overpowering and slaughtering his victims. Mae is the only one that comes across as having anything related to humanity left, trying her best to protect Caleb while at the same time trying to live up to the expectations of her adopted family. Her heartlessness comes across more of a necessity of survival, not something she gets a sadistic joy out of like Severen.

You can tell he’s really relishing this moment.

Speaking of Severen, both Bill Paxton and Lance Henriksen are exceptional in their respective roles. Paxton’s performance is at once hammy and filled with a lethal black humor that shines in ever scene he’s in. You can easily see that Severen is not only evil, but that he also delight in that evil in a way that unsettlingly unites the vampire family. Henriksen brings both a ruthlessness and charm to Jesse that you can easily see why he had managed to survive for so many years.

One of the most striking things I noticed about this film was the cinematography. Many scenes are set in spacious open fields, yet when night falls everything becomes moody, almost claustrophobic. The use of light and shadow is exquisite and fitting to a movie such as this, blending the western and horror themes together beautifully.

Near Dark is a more modern take on the vampire myth, an American modernization of them if you will. Gone is the old world elegance usually associated with them. Instead it’s replaced by a more modern, gritty, urbanized approach. So if you like your vampires to have a little class, look elsewhere. If, however, you want more of a Bonnie and Clyde bent to your vampire movie than this is something you may want to look into.

Near Dark is listed on Amazon as ‘currently unavailable.’

Which is a shame, because based on the prices of the physical copies, it seems to be out of print. Although that might be for the best, considering they seem to have been trying to rip-off the Twilight with those new cover photos. *shudder*