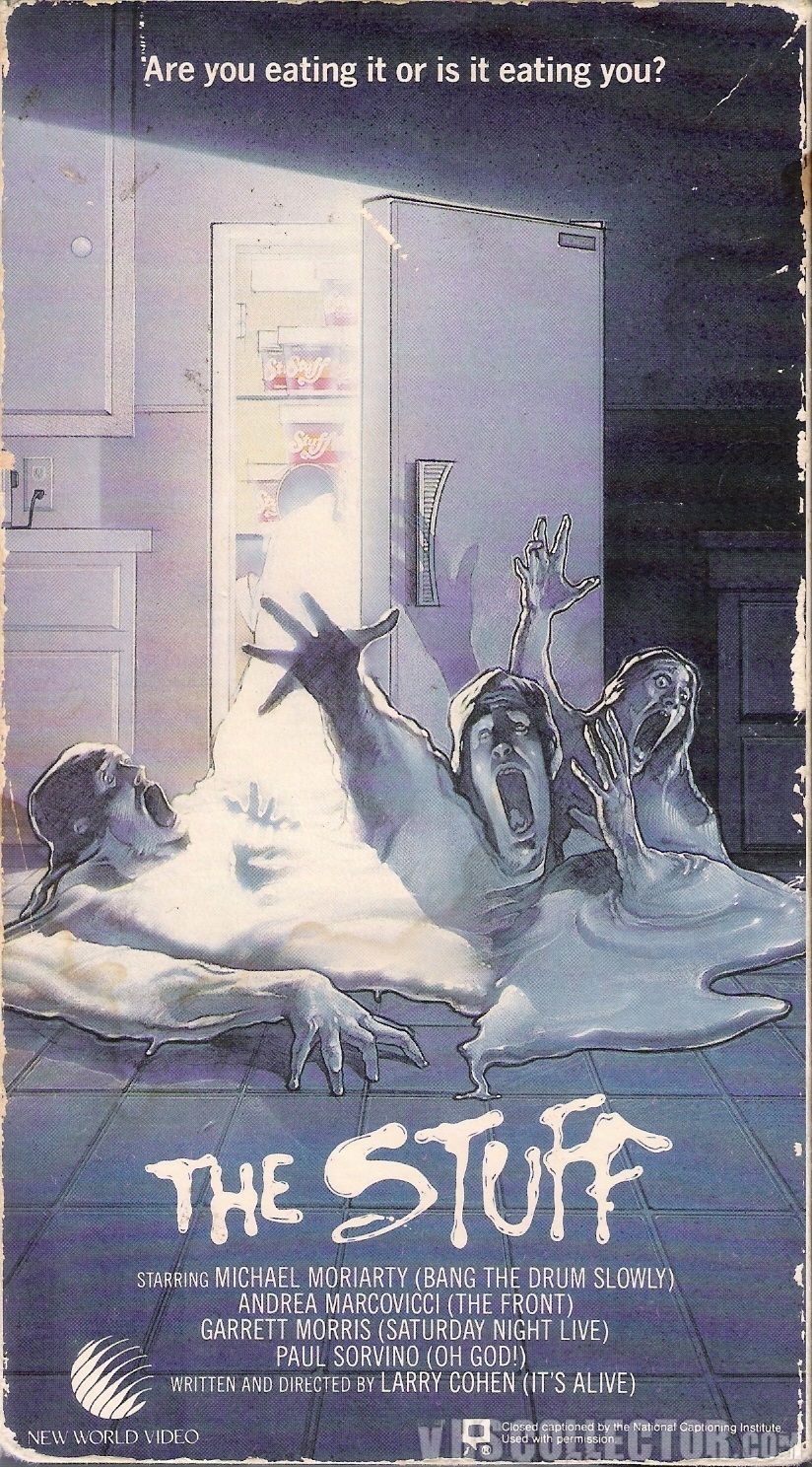 Ex FBI agent David “Mo” Rutherford had taken up a new calling as corporate saboteur. His new job: Working for a loosely collected ice-cream conglomerate to investigate The Stuff, a new dessert craze that is sweeping the nation. People just can’t seem to be able to get enough of this innocuous looking white ‘dessert.’ The Stuff is no-calorie, doesn’t melt and, much to the consternation of the ice-cream industry, no one seems to be able to find out what it’s made of. It’s also making some people act suspiciously, so now it’s up to Mo, Stuff ad campaign designer Nichole, a 10-year-old boy, and a rogue military Colonel to get to the bottom of this goopy mystery. The Stuff paints itself as a cheesy, b-movie horror film that takes notes from earlier titles such as Invaders from Mars, The Blob and Invasion of the Body Snatchers. Sweet looking nuclear family with a cute kid who knows something’s wrong, but no one will believe? Check. Gallons of oozing, sentient goo? Check. Elements of mind control? Check.

But The Stuff’s strength isn’t found in any of the horror or comedy elements. Instead, I’d argue it’s strength lies more in it’s mocking of consumer society and it’s satirical mocking of advertising. It spends more than one scene making fun of how easy it is to get people to consume things that are bad for them, all because of a bright logo, catchy jingle, and a model showing a ridiculous amount of skin. If this is all it takes for you to devour sentient goop, then you need higher standards.

It doesn’t stop with it’s little social commentary at the made up advertising campaigns, either. Eating too much of The Stuff, allows the goo to take possession of its victims, turning them into devout followers who tout the non-existent benefits The Stuff can provide. And when The Stuff is done with them? It vacates the host body, leaving behind dry, easily breakable human husks. But The Stuff tastes so good that, despite several clear instances that something is very, very wrong, no one seems to care. Not the consumer, and especially not the corporation selling The Stuff. As far as metaphors go, the film doesn’t seem keen on doing subtle. Other than that, the movie works fairly well as a fast paced, decidedly B, horror flick. You’ve got a protagonist who’s an antihero, some light corporate intrigue, an evil substance taking over the country and a crazy military leader with an exaggerated sense of patriotism. It basically checks off all of the boxes when it comes to B-movie staples and, despite a couple of sluggish scenes, moves through them quickly enough to keep interest up. In fact, in a couple of instances, I’d argue it moves through things a little too quickly. One thing I hate about some low-budget films is that some of them like to stretch out the run-time with unnecessary padding, like when they’ve established a character is going somewhere and then spending 2 whole minutes showing said character’s entire journey from their current location to the next one. Like, I don’t need to see someone slowly getting into their car, pulling out of the parking space and then slowly driving away unless there’s someone in the back seat that’s about to jump up and stab them. The Stuff, thankfully, appears to hate this very thing as well. Unfortunately, they seem to have overcompensated in this regard, because the later half of the film is filled with several very sudden jump cuts. Person A will walk in a room, it’ll cut away for two seconds to Person B in another room who hears their screams, then it immediately cuts back to Person A trapped against a wall while The Stuff bares down upon it. Can you figure out what happened and fill in the blanks in between these pieces without any trouble? Yes. Does that stop it from feeling horribly jarring? Nope, not one bit. Wait, that’s not even close to the same room. How the hell did you get in there?

For something that was clearly low-budget, the film handles itself quite well, effects-wise. The Stuff uses practical effects for The Stuff, and for the most part they handle it pretty well. The sentient goo oozes around quite believably, and there are a couple of scenes that are quite impressive, including one that utilizes the same rotating room used in A Nightmare on Elm Street. It’s when the film moves away from the practical side of the spectrum that things get more dicey. There are several scenes that use computer effects, particularly the ones that use green screens, that really show their age and stand out like a sore thumb when compared to the rest of the film. That’s not to say that every practical effect in the film is a hit out of the ballpark, but even the movie’s worst physical effect is 10x better than it’s best computer effect. 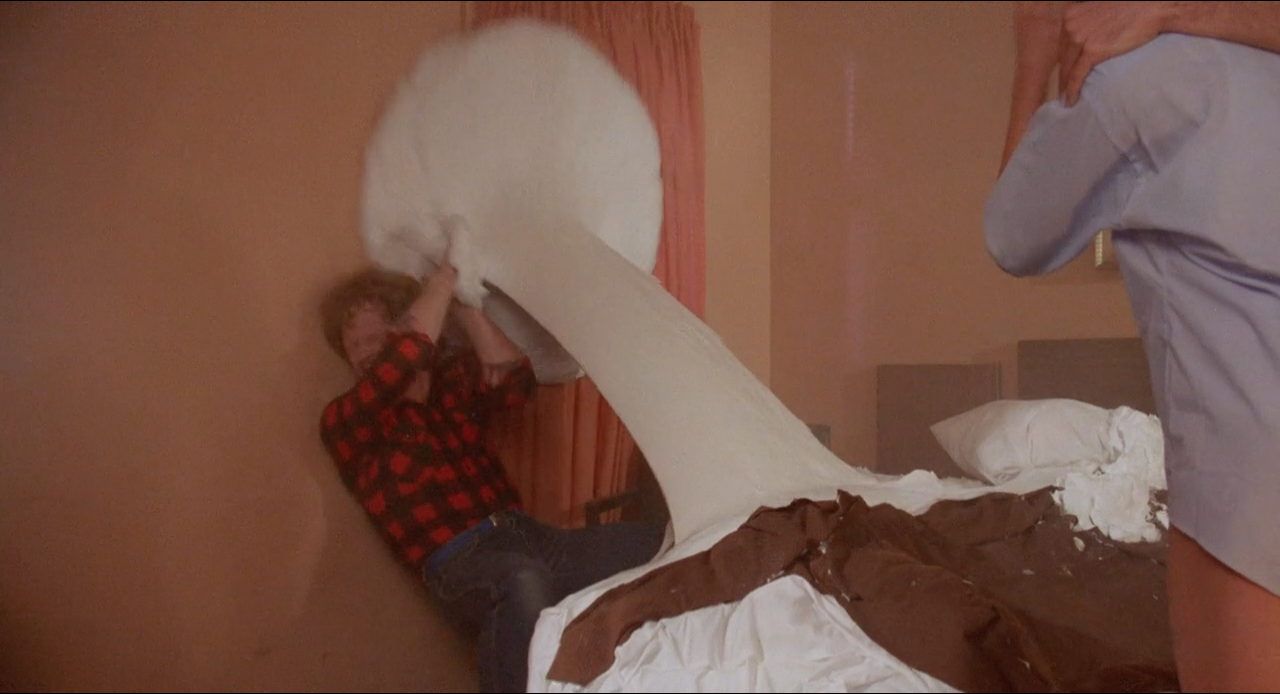 As for the acting it’s…. alright. Michael Moriarty (Mo) plays a decent rambling, con-man anti-hero, but I think the standout goes to Garrett Morris, a rather pissed-off former ice-cream owner who goes by Chocolate Chip Charlie. Everyone else is just okay, with the exception of the kid, who is just…well, he’s a kid. So, is The Stuff any good? As a satirical horror film it’s pretty great. The humor is going to be hit-or-miss with a lot of people, but the satire itself is pretty spot-on and very entertaining. You can tell that they put a lot of thought into it, and enjoyed putting together the spoofy commercials and advertising. Better yet, it’s creative jabs at consumerism and advertising are still relevant today. Or maybe that’s worse, I don’t know. The biggest disappointment for a lot of people is going to be the lack of ‘horror’ in this horror-comedy. Let’s face it, white goop with the consistency of Cool Whip does not make for a very compelling, let alone scary villain. But the real villain isn’t The Stuff, but rather hideous corporate greed. So for people coming in expecting a schlocky horror movie, that’s just not going to be what they’re looking for. But people who can appreciate the satire and can look past the early crappy CGI will likely find some good nuggets of fun here.

The Stuff is currently available for streaming on Amazon Prime. 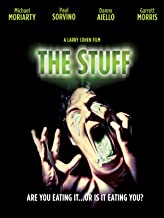 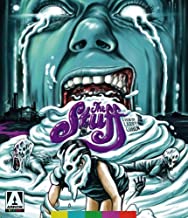