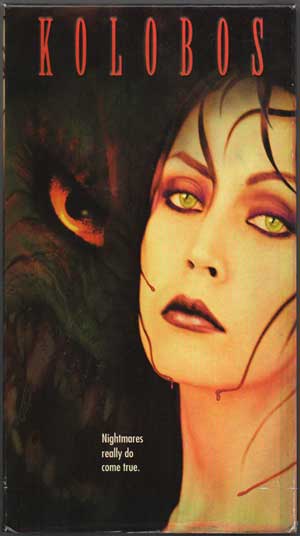 This may be one of the most deceptive covers I’ve ever come across. Take a look at that thing: Pale, yellow eyed woman, stringy hair, strange lizard-like thing in the background. You want to know what part of that is actually in the movie? None of it. The closest thing the movie has to a lizard is one characters’ slimy pick-up line and, unless she’s in the background somewhere, I don’t think that woman is even in the damn film. That cover basically suggests that it’s going to be some sort of monster movie when, really, it’s anything but.

The story of Kolobos focuses on quiet, kinda dowdy artist, Kyra, first as she stumbles, bloody, through the streets of town (before getting hit by a car), and then later at a hospital. There, the doctors can get her to only utter only one word: Kolobos. As Kyra begins to recover, the film flashes back to the events that led up to her injuries.

Kyra and four new acquaintances answer an ad in the newspaper looking for potential participants (“freeloaders”) in some sort of documentary style experiment that will film all of their interactions while living together. So, it’s basically The Real World before all that crap got popular. What Kyra’s fellow lodgers don’t know is that she has some documented mental issues that she’s been working through and even has even been taking some medications for them. But whatever specter she may have hovering over her mental state seems rather mute when the posh residence they’re staying at goes into lock-down mode, trapping them inside with a bunch of laser tripped booby traps and a dark, faceless figure that seems intent on killing them one by one. 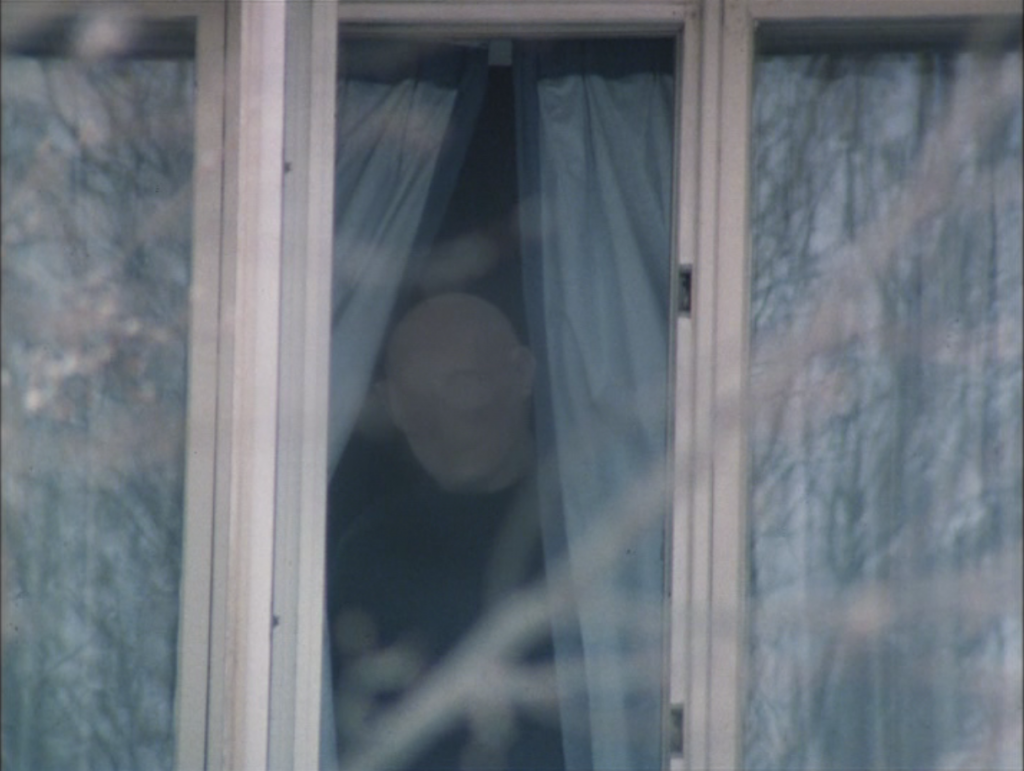 This is a great way to freak out any busybody neighbors you may have living across the street.

I found this curiosity of a film one day while pursuing the VHS section of my local thrift store. Having never heard of it before, I took it home with me, because if if I am anything, it is a sucker for the odd and unknown. One of the first things I noticed about Kolobos when I pulled the tape out of the sleeve was that it was already partially played. You know those old stickers that used to say, “Be kind. Rewind.”? Well, they hadn’t. And I found it weird, not because I hadn’t seen that before (it happens all the time with tapes), but because the last viewer stopped it about ¼ to 1/3 of the way through. I thought, “What an odd point to stop.” But after I rewound it and popped the tape in I quickly realized why they’d chosen to do so, because the first fourth or so of the movie drags. And when I say it drags, I mean it draaaaaaaags. The first part of the movie switches between the first person perspective of Kyra while she stumbles through the streets and lies around in the hospital, and a more docu-style viewpoint as the other, future members of the house give interviews.

The vapid characters, horrible wooden acting and terrible pacing of the entire first segment almost had me turning off the tape myself. Yes it was painful, but if a movie is going to suck than I’m going to watch the whole thing so I can give you a step-by-step of why it sucks and you can avoid such pain (the things I go through for you people). So color me surprised when the viewpoint changed yet again, to a traditional third person perspective, and the movie proper kicked into gear.

Once everyone’s settled into the house the whole film picks up. The characters actually have some interesting interactions, despite most of them being annoying, petty, and horribly self-centered. That said, they’re not too horribly unlikable and their faults add a little bit more to what you’d normally see in the characterization of your typical horror movie victim. There is also a certain level of self mockery to them as well, adding a bit of humor, so any time they get too full of themselves the movie makes sure to knock them back down a peg. It’s a nice way of making them more human and slightly less annoying. Not that it’s a good idea for you to get attached to anyone in a slasher. 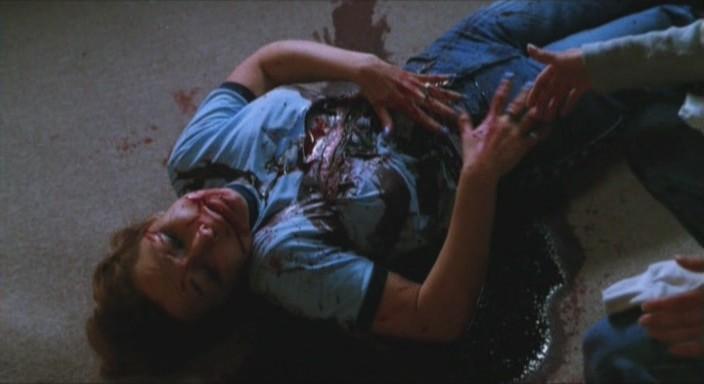 Since they all spaz out and die on you in the first hour, the little bastards.

One of the things that I thought made Kolobos stand out a bit from other films of its ilk is Kyra. During the movie we find out that Kyra as some sort of unspecified mental illness that causes her to hallucinate. This adds a whole level of “what the hell am I looking at” since no one can be sure if it’s actually something going on in the house, or if it’s just some part of Kyra’s delusions.

Then, once things start to really hit the fan and her roomies find out about her mental illness and discover some of her unsettling drawings, there’s the other question of whether or not she’s somehow involved with what’s going on or if her housemates are using their new found knowledge to turn her into a convenient scapegoat. Either way, the gruesome artwork and disorientating imagery adds some unexpected surrealism to the events and makes it more interesting. 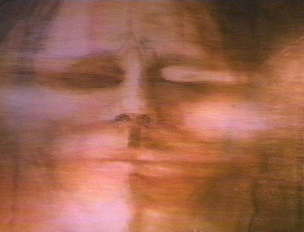 Once the blood starts flowing in Kolobos no one is safe and the deaths themselves are pretty gruesome. There are projectile buzz saws hidden around the house, acid-spewing water taps and claws that reach out of the damn walls. One of the deaths in particular, which involves an eyeball and a deer antler, is not only a little uncomfortable, but also harkens back to Italian cinema. 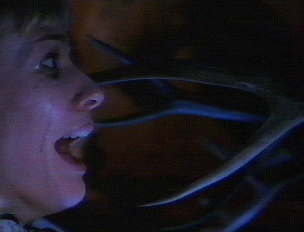 Depending on your viewpoint, you could also
replace “harkens” with “ripped-off.”

In fact, the filmmaker paid homage to a lot of the greats that came before in various ways. Kolobos opening theme is so close to Susperia’s that it’s almost an exact copy. Though, admittedly, the added bonus of a creepy children’s choir in the background is a nice touch. But feel free to judge for yourself:

Despite it’s awkward beginning and my initial urge to turn the damn thing off, Kolobos ended up being pretty entertaining. The deaths were pretty grisly, the visuals were intriguing and it was fun noticing the influences of other movies. I’ve since read that the beginning and ending of the movie may have been late additions, added to the film when the filmmakers grossly overestimated the movie’s run time. This would make sense to me, as it explains the very uneven pacing and why the ‘meat’ of the movie feels more complete than the beginning. But though the opening might be lackluster, it does have a rather fitting (though slightly ambiguous) ending. So if you have the patience to get past the slow start, there’s actually some fun to be had here.

Just don’t expect any lizard creatures. If you do there will be much disappointment.

As far as I can tell, Kolobos is not currently available for streaming on any platform.

It is, however, available on DVD, and it has received  a Bluray release by Arrow.