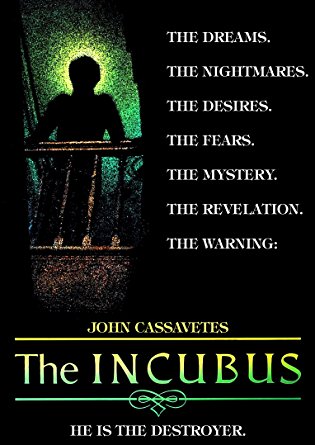 The unnecessary buildup followed by the huge
letdown….

Dr. Sam Cordell has just moved to the small town of Galen with his daughter, Jenny. But the doc seems to have chosen a bad time to move, as the community of Galen is suddenly plagued by a series of inhumanely brutal rape-homicides. Sam teams up with the local sheriff to try to stop the slaughter, a plight which may or may not be connected to his daughter Jenny’s new crush, a young man who seems to have chosen this seemingly inopportune time to completely lose his marbles.

I picked this up on VHS a couple weeks ago along with a bevy of other horror-esque tapes. It was on the top of my pile to watch. Then I realized Amazon added it to Prime with a much better transfer. There’s 40 cents I’ll never see again. Oh, well. Back to the thrift store the tape shall go.

Anyway, The Incubus is a film that doesn’t quite seem to know what it wants to be. It starts off by mimicking the stalk and kill tropes typical of a slasher. But then it shifts more into a mystery, before finally embracing the mantle of supernatural horror in the last 20 minutes.

That final bit is aided by a subtle gothic vibe throughout the film, thanks in part to the architecture and atmosphere of Galen proper, but is also helped along by director John Hough, who’s probably better known for his other supernatural flick The Legend of Hell House. The film’s littered with well-framed shots, sharp lines, excellent lighting and rich colors. If only that experience behind the camera and all that air of sophistication could have been translated to the rest of the film.

Oh, so Incubus is a gothic ghost stor-…Oh, it’s not? Bummer.

Okay, so it’s not completely Hough’s fault. You can tell just by watching it that there was at least some attempt to add some refinement to the film. But when your subject matter involves rapes so brutal that they disfigure and kill the victim than you’re pretty much doomed from the start. There are just some subjects that can’t be polished up, no matter how hard you try.

To the film’s credit though, it never delves too visually into the rapes. Yes, there is some nudity and blood before, and a lot of blood after, but the acts themselves are mercifully just off camera, all while still managing to be suitably brutal and horrific. In a movie about demon rape that one small concession is about as merciful as you can get.

But those are just the short scenes where we’re forced to watch the brutalization of numerous young, innocent women. What about the rest of the film?

Why I’m glad you asked, obnoxious voice in my head! Most of the rest of the film if spent following around the “good” doctor Cordell (played by John Cassavetes) as he tries to help the police solve these vicious crimes. Because I guess the town is so small that they made him a deputy sheriff or something without telling us, because otherwise I have no idea why the hell he’s taken it upon himself to do their job.

I put good in quotes up there, because Sam comes across as a creeper of the highest order. He’s the type of protagonist who is at best unlikable and, (which here is more often the case) at worst bland. You would think that the creepiest guy in the room (no small feat with a demon on the loose) would at the very least be interesting to watch. In this case, you would be wrong. I wouldn’t got so far to say that Cassavetes phoned it in, but you can tell that most of the time he’s nowhere near 100% invested in what’s going on.

This is made all the more apparent by his seemingly insurmountable struggle to convey more than one facial expression in whatever scene he’s in. For whatever reason, ‘creepy, leering smirk’ seems to be his go-to expression in this movie. So much so that I began to suspect that it’s just his default look whenever he gets bored. Like some kind of subconscious reflex. Unfortunately for him, his subconscious reflexes at the most inappropriate times.

When an old lady chistizes him- When he’s talking to his daughter– 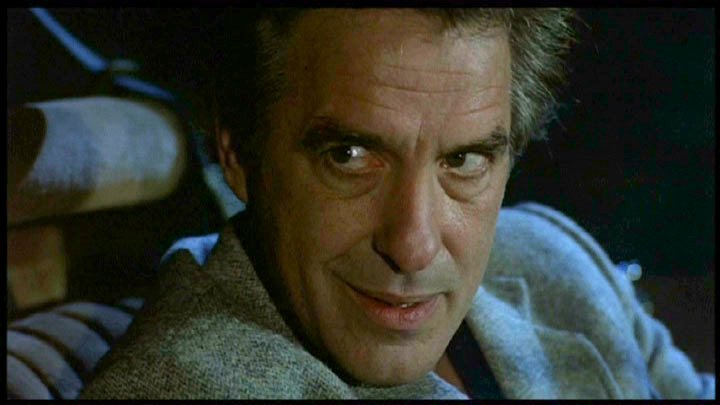 At a CRIME SCENE–

This attempt at looking suave may have worked when he was younger, hell it may still be charmingly disarming in the right context, but here it just comes across as creepy and ill-timed. What’s worse, is that no one seems to take notice of this very bizarre trait except for one woman, and even she doesn’t seem to quite know what to make of it. I take some small solace in knowing she looks about as confused as I feel.

Everyone else’s performances here are just…okay. There’s some underacting. There’s some overacting. For the most part it’s pretty much what one would expect from a film like this. Daughter Jenny is doting (despite her creepy dad.) The small-town sheriff is confused, but determined. The plucky reporter keeps showing up at crime scenes despite being told to f*&% off.

And then the film throws a wrench into the works and gives you Grandma Galen, who looks like she just got lost and wandered off the set of a 19th century period piece.

England called. They want their school marm back.

Of all the characters, it’s Grandma Galen and her grandson Tim (the aforementioned possibly crazed boyfriend) who end up being the most interesting. Poor Tim’s suffering from insomnia because the bizarre dreams he’s been having have convinced him he’s somehow connected to the murders. Meanwhile, Grandma’s clearly keeping secrets and nervously reading passages from old, handwritten texts. The only thing that could make them any more interesting is if we found out there was some kind of dungeon in the baseme-

Damn it, movie! Why are you focusing so much time on Dr. Creepo when you’ve got these two gems AND a dank-ass dungeon off on the sidelines?

Alas, we’ll never know, as that is but another fault this movie has, that of throwing plot threads at us without them actually panning out. What is this Drivas guy even doing there? Why would you bother bringing up the doc’s past if it was just going to go *Poof!* What crimes happened in Galen 30 years ago? Why did they suddenly stop? Why did no one bother to edit this script of all this extraneous crap to make it more comprehensible?

The answers to those questions are presented the same way that Caldwell’s past is: *Poof!*

But hey, the film does have a scene where the band Samson, featuring the future Iron Maiden vocalist Bruce Dickinson, performs. So there’s that.

It may honestly be the most noteworthy part of the film.

So The Incubus ends up being not good, but not horrible either. The direction and atmosphere are good and the lighting is excellent (seriously, it’s surprisingly pretty.) But the rest of the movie is so choppy and inconsistent that it’s hard to give a casual recommendation. It doesn’t help that I suspect that the ending is either going to hit you just right or feel horribly lame.

If you don’t mind slow-burn horror-mysteries with hit-or-miss acting that are more exposition than action, than feel free. Otherwise don’t look too hard for this one.

The Incubus is currently streaming on Amazon Prime.