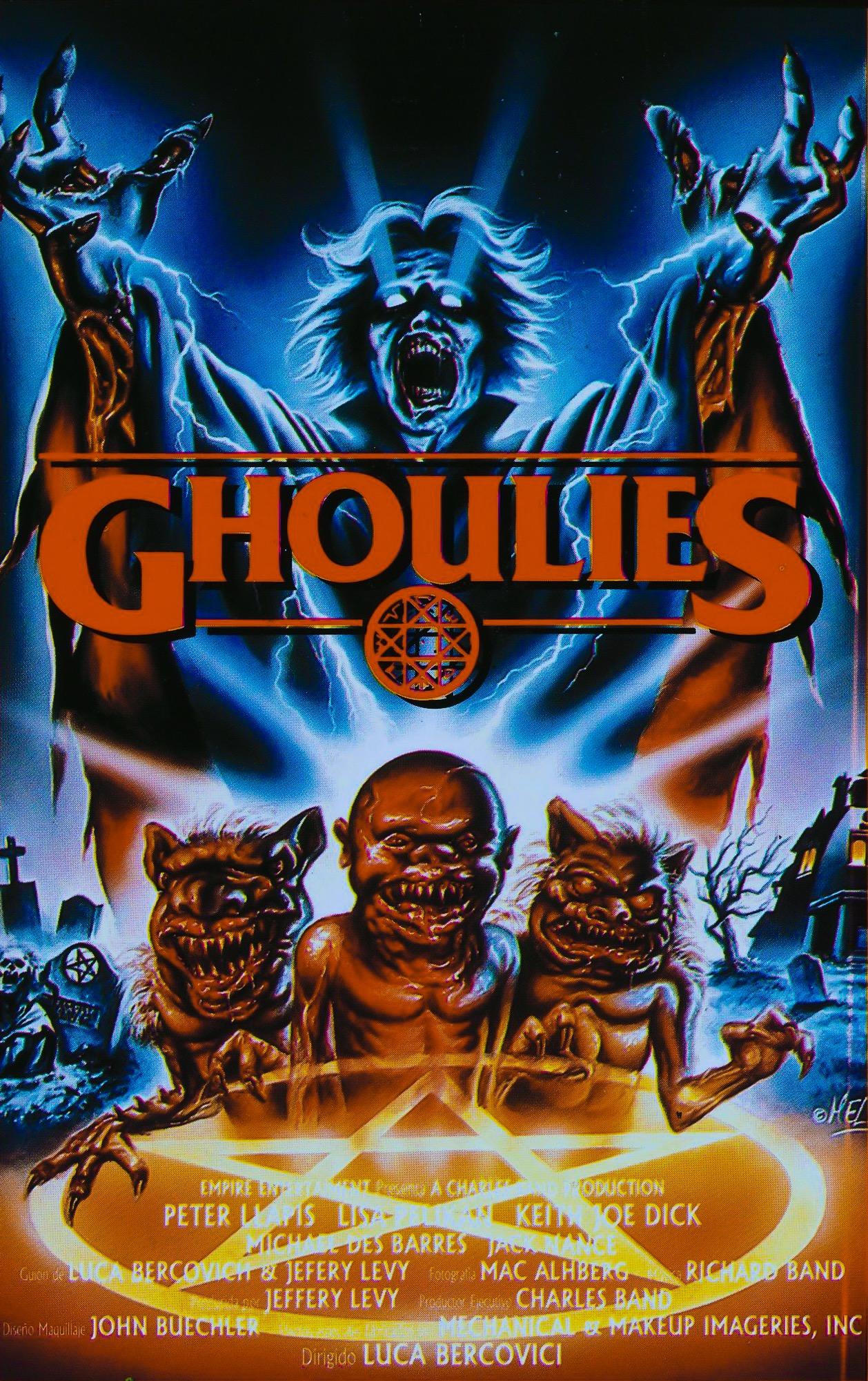 During an occult ceremony, an infant is saved by his mother from his father’s planned sacrifice and is spirited away by another occult member. Over twenty years later, the now grown man inherits his father’s old mansion, and stumbles upon books and spells related to demonology and the occult. He quickly becomes obsessed with his new discovery and his father’s old spell books and starts delving into them in an effort to better understand his lineage. But as he starts successfully summoning more and more powerful minions for his personal disposal, he quickly starts to become obsessed with knowledge and power, to the point where he doesn’t care what happens to him or those around him, as long as he manages to achieve his goals.

Something tells me this wasn’t part of the original plan…

Considering how much I like similar creature feature movies like Gremlins and Critters, I’ve never actually seen Ghoulies before. I have vague images in my head of certain scenes with the little imps in them, or having them going off to college, but I’ve never actually seen the first film, just bits and pieces of the sequels it seems, because absolutely NONE of this was familiar to me. Ghoulies is another Charles Band production (I really need to take a break from this guy), but is from a time before Full Moon, back when Band founded Empire Pictures, which distributed some really fun films like Re-Animator and From Beyond. Ghoulies, unfortunately, is really not in the same category as either of those movies. It was one of Empires’ earlier productions, so not only is it a little rough around the edges, but you can also see glimmers of the same types of quirks and failings throughout this movie that would plague other films that would later become synonymous with Full Moon productions.

Despite a decent premise and some nifty looking little demon creatures, Ghoulies just isn’t all that engaging. In fact, it can be downright boring. You would think a movie advertising tiny demon creatures would be more fun to watch, but the truth is that the slimy little puppets only end up taking up a scant amount of screen time. Instead, the bulk of the film focuses on protagonist Johnathan, as he slowly distances himself from his girlfriend Rebecca while he becomes more and more obsessed with the occult after he discovers the many spell books in his fathers house. So the film winds up being more of a drawn-out character drama, rather than a creature feature, which I’m sure disappointed a lot of young kids and pre-teens who convinced their parents to take them to this flick. Poor things probably went in expecting Gremlin-like mayhem that included mini-goblins coming out of toilets, and instead they got some weirdo with glowing green eyes and daddy issues, his concerned girlfriend, and their very confused gaggle of friends. The visual including the little green creature coming out of the toilet was initially only included in the advertising. It was only after the advertising gained steam that a quick clip of Toilet Goblin was added to the film after the fact. If I’d have gone to that movie after being conned by the trailer and that poster, I’d have walked out of that theater totally depressed. This was only five seconds of the whole film.

It doesn’t help that the film’s plot moves way too slowly and doesn’t make a damn bit of sense. It starts out all right, what with the creepy dude trying to murder a baby and all, but it quickly goes downhill from there when you realize that the entire plot could have been avoided if the occult dude who had saved Johnathan from certain doom years before, had just gone into the old mansion and removed all the occult artifacts and demon books before the kid ever stepped foot inside the house. But I guess that would have just interfered with the rest of the story and the multitude of random 80’s cliches found within, like big hair, miniskirts, wild parties, skinny ties, drug use, horrible 3D holdovers, living puppets (seriously Band, WTF?), big sunglasses, and random slutty chicks that show up out of nowhere. Oh, and it’s also got zombies, little people and a Deus Ex Machina wizard who shows up at the end, because, pffft, why the hell not at that point, right? You’d think that with all that stuff included that the film would end up being kind of fun, but the movie is played almost completely straight, which sucks most of the fun right out of it. And even with all the weirdness it contains, the movie really only has enough “plot” to fill up about an hour. Maybe. Too bad the film’s run time is actually 82 minutes, meaning you get to sit through a lot of unnecessarily extended scenes and extra included nothingness, which makes the movie drag on and on, and feel much longer than it needs to be. The zombie dude looks pretty cool for a few seconds, so that’s nice.

I’m still pissed off about the wizard though…

And that’s just touching on the plot-related weirdness. I haven’t even gotten into the bulk of the cheesy costuming, awkward special effects, strange character actions, or just outright film goofs. You’ve got glowing green eyes, robes that look like they fell off the back of a Spirit Halloween truck, bright flashes of bright CGI lights, and one very creepy lady with an elongated tongue. And it’s all intermingled with scenes where you can tell that the movie was initially going to be made in that ridiculous 80’s version of 3D where everything is COMING RIGHT AT YOU, but they never got around to implementing the 3D part, yet we’re still forced to look at random props awkwardly COMING AT US at odd angles.

This was the point where the movie was getting a little too weird, even for me.

Then of course, because this is a Charles Band film, there are the expected goofs, like the scene where you can see the boom mic sneaking into the frame, or the times where you can clearly see the sticks the puppeteers are using to animate the little Hellbeasts…or whatever they are. But the best parts of the film are the truly bizarro inclusions, like the scenes where all the characters are wearing sunglasses and screaming into the air during an incantation ritual. Or, my personal favorite, the part where the evil occult lord rises from the dead and uses his evil powers to break the glass of the back patio doors, in a wanton display of shards, wind and billowing curtains, only to then simply…. open the fucking doors and walk right through them. Like, jeebus dude, are you serious? I found it so friggin’ ridiculous that I had to go back and watch the segment twice, because 1) talk about a completely trivial use of your dark power, and 2) what a fraggin’ overdramatic douche-nozzle. You could have just opened the door, dude. I can’t take your evil plot seriously after seeing that, cripes.

Oh calm down. You didn’t summon a demon. All your friggin’ candles just set off the sprinkler system. Shockingly, the acting here is pretty solid with only a couple exceptions. Peter Liapis, who plays Johnathan, hams up his role to great amusement. Keep in mind that most of this movie is played completely straight, so all the added melodrama feels wildly over-the-top. Though that might not completely be the actor’s fault, because the character’s father, Malcolm, acts exactly the same way, so maybe they were going for some family thing, I don’t know. The other thing that stands out is that one of the secondary characters is Mariska Hargitay in her film debut, and in one of her scenes they dubbed her. Not a lot, but a little, and at first I didn’t even know they dubbed her, I just thought that her scream sounded really weird and she was never going to make it onto any Best of Scream Queen lists. That or they had to do so many re-shoots that she lost her voice. But then when I looked it up I learned that it wasn’t even her screaming. The director apparently didn’t like her scream, so they dubbed over her scream with a different scream. Except they picked the wrong kind of scream. They needed a scream that conveyed “OMG I’M IN PORTAL PERIL!”, and instead they went with “Eek, a mouse!”. So the whole scene looks and sounds really wonky because 1) it’s not the right kind of scream, 2) the scream doesn’t match the person it’s coming out of, and 3) the scream and her lip movements aren’t even synced up correctly, because the filmmakers were incompetent boobs. Not that any of that is Hargitay’s fault, cause it’s not. She was fine and she even had reasonable outfits to wear (by 80’s standards). It’s just that the whole freaking scene is so off that it’s really noticeable and I felt the need to mention it. Put your tongue back in your mouth you weirdo. I’m usually a big fan of cheesy horror movies, but even I had trouble with Ghoulies. The action is fine and the creatures and practical effects look pretty good, but it’s just so…dull. Don’t get me wrong, it has its moments and there were parts of it that I found very amusing, but it’s bogged down by a sluggish pacing, and all the included seriousness and melodrama does its damn best to suck what little fun there is right out of the film. The movie evens itself out in the last 20-minutes or so by balancing out the wacky-ness with the fun slasher bits and the drama, but by then it kinda feels like it’s too late. Most people aren’t going to want to wait that long for the movie to be interesting, and I don’t blame them. If you like cheesy horror movies and you’ve got a lot of patience and can wait it out, then it’s worth at least one watch. But if you’re looking for something more lively then you’ll likely walk away disappointed.

Ghoulies is available on a variety of streaming services.

Ghoulies is also available on DVD and Bluray. 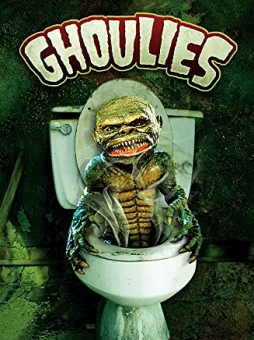 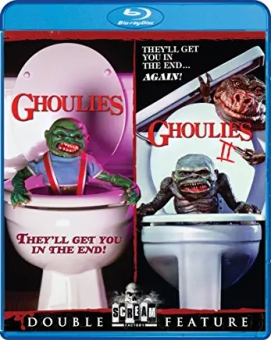