Kristy visits her father and step-mother and helps them move into their new house. While moving some furniture, Kristy’s father cuts himself and bleeds in an empty room of the house. Unbeknownst to the rest of the family, Kristy’s uncle Frank had died in that very room, having used a supernatural puzzle device to summon a clan of sadomasochistic demons. The blood from Kristy’s father inadvertently resurrects Frank, but only as a pile of skin and bones. He’ll need more blood if he wants to become whole, and lucky for him he has a willing accomplice in Kristy’s step-mother Julia. Julia brings Frank all the hapless victims he needs in order to finish his rebirth, but soon he sets his sights on young Kristy, who he’s always had an unnatural obsession with.

Let me start off saying that I love this movie. It’s probably one of my favorite horror movies, as there really isn’t anything else quite like it. Pain, pleasure, demons, mystical monsters, gore, slasher-like sacrifices…this movie’s got a little bit of everything. And of course, the greatest draw are the cenobites, and with good reason.

I mean, just look at them.

They are truly nightmarish and the figure of Pinhead has become so iconic that even if you’ve never seen a single Hellraiser film, chances are you’re familiar with the faces. And Doug Bradley plays the role of Pinhead with such a confident, serious and eerily calm demeanor that it leaves no question that this isn’t a group you’d ever want to trifle with. They’re all so cool and creepy that it’s really a pity they aren’t on the screen all that much.

Another thing I’m always continually impressed with is how well the film is shot. For a horror film, there is excellent use of symbolic imagery and angles.

Also, a head on a plate. 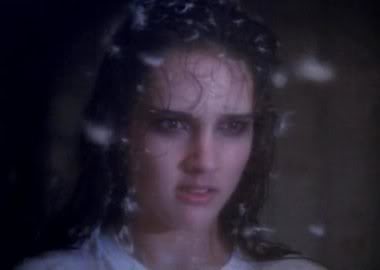 A very ethereal scene…doesn’t really fit into the rest of the film, but it’s damn pretty… even with all the blood.

Not to mention good use of light and shadow.

Wouldn’t be so dark if you’d pay your electric bill, smuck.

It’s really a very pretty film, once you get past all the icky, sticky, bloody parts.

That said, though it’s one of my favorites, I must admit that it does have a couple small flaws. The first is it’s slightly slow pace. The movie really picks up at the half-way mark, and there is enough going on to keep you curious, but some of the earlier scenes seem unnecessarily slow and drawn out. They’re good for world-building, but they do tend to drag. 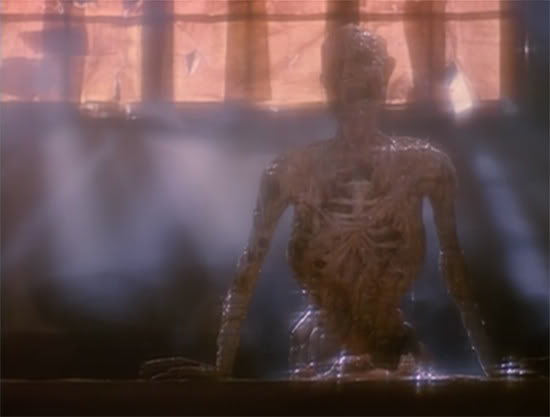 Few scenes can continue to keep me as fascinated and make me as squeamish as this one.

The make-up and effects of those scenes are excellent, even more-so when you consider the film’s smaller budget. 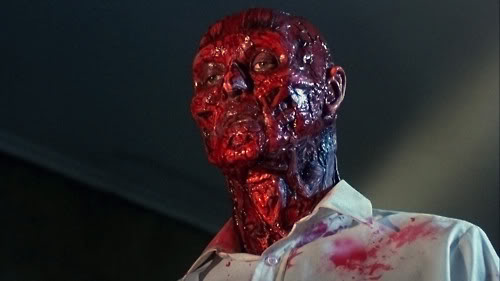 I cringe at the number of hours this must have taken to put on….also, because he’s, well, icky.

No, the effects I’m referring too are those really early CGI shots, the ones most often centered around the puzzle box. Sadly, they have become very dated and stick out like a sore thumb when compared to the rest of the film.

That said, those are small qualms, and there’s nothing else quite like Hellraiser. Even now it’s truly a unique beast. If you like horror movies it’s practically required viewing. So if for some reason you haven’t seen it already, go do so.

Hellraiser is available on a variety of streaming services.

Hellraiser is also available on DVD and Bluray.