Neil and his new bride, Sherry, head to a remote Greek island where they’ve heard rumors that Neil’s missing sister, Madeline, may have been seen. Despite their cold welcome, the island’s mayor, Nereus, brings them to his home, where he tells them he doesn’t recognize Madeline. Highly skeptical of the evasive man, Neil and Sherry do a little exploring and, low-and-behold, quickly find Madeline roaming around the city streets. Turns out Madeline has been doing a little art restoration at the local monastery when she’s not spending time with her friend, boat captain and adventurer Frye, and his maybe-kinda-sorta girlfriend, Barbara. Relieved that his sister seems to be fine, Neil and his wife decide to stay a couple days at the quiet little island.

But things aren’t exactly what they appear to be. It seems that the idyllic island has a dark history. Centuries ago the land was besieged by an ancient monster, who could only be placated with acts of virginal human sacrifice. At some point in time, the cave where the beast dwelled sank into the ocean and was sealed off, sparing the island from further bloodshed. But of course the opportunistic Frye knows nothing about this. He just wants to illegally hunt for treasure in the ocean. So when he comes across the sealed off cave, he does what any good adventurer would do and blows the entrance sky high with a chunk of plastic explosive. He doesn’t find any cool treasure, but he does unknowingly awaken the monster from it’s centuries long slumber and frees the creature to roam and hunt once more. And let me tell you, after being trapped for that many centuries, that ugly sucker is hungry.

Blood Tide is an English and Greek horror co-production from 1982 that’s sort of faded into obscurity to the point where rumors have circulated that the film has since fallen into the Public Domain (Hint: that is false.). On paper, I’m sure the movie sounded great. You’ve got a beautiful island, filled with beautiful people. There’s an ancient evil lurking in the depths, and a colorful, though brutal, history for our characters to solve. Sure, as far as horror plots go, the summary is kinda standard, but the added historical angle should have opened the door to a lot of interesting possibilities. Emphasis on should have. Because, alas, it appears the evil specter of cheapness hath blighted the potential of this promising horror romp, and not even a relatively talented cast including the likes of…. Hold up.… James Earl Jones? Wait, what? Seriously, he’s in this movie?

Well, I’ll be damned he really is in this. And it’s not just a cameo. He’s a main character and is literally in the film till the end. Color me surprised. It’s just a shame the movie couldn’t live up to the weight the mere utterance of his name now provides.

Besides the very youthful looking Jones, the film has a surprisingly solid cast filled with many familiar faces. Nereus is played by José Ferrer, who was the first Puerto Rican actor to win an academy award, in this case for his role in Cyrano de Bergerac, but was also a very prolific TV and movie veteran. Then there’s Martin Kove as Neil, who’s probably best remembered as John Kreese, the morally questionable sensei in the three Karate Kid films and Cobra Kai series. The woman who played Shelly, Mary Louise Weller, was in Animal House and The Evil, but also had guest spots in a variety of 70s and 80s TV shows. Madeline’s Deborah Shelton was a model and former Miss USA, but also starred in Body Double and Sins of the Night, and was also prolific in TV, including a regular stint on Dallas for three years. And finally there’s Lydia Cornell as Barbara, who was a TV regular in the 80s and…. Well, admittedly, she wasn’t very good in this film beyond a couple of amusing lines. But I fully blame that on the film’s script, as it really didn’t give her any characterization beyond ditzy blonde who carries around a jukebox.

And she literally carries that thing around everywhere. It’s very odd.

But odd moments of characterization seem to be rather prevalent in this movie, and aren’t reserved just for Barbara, though the women do seem to suffer the most in this film. Shelly isn’t given much to do besides spout a few awkward lines and point out when her husband is making an ill advised decision. Poor Madeline is forced to walk around as if in a trance which, admittedly, she is for part of the movie. And by that I mean, it’s actually a plot point. But her trace-like moments seem to come on sporadically, without any real rhyme or reason behind them. She’ll be fine one scene and then completely spaced out the next, and even though you know something is amiss, it’s never really explained what triggers these moments. They just happen. But hey, at least you get to watch her look equally good writhing blindly in a soaked white tunic and standing stoically staring out into the windswept sea. To be fair though, the guys don’t really fare much better in the odd actions department. Neil has a bizarre tendency to wear white short-shorts and take off his shirt (and put it back on before taking it off again.) I know they’re on an island and all, but he is literally the only male who goes around doing this and he just really needs to learn to read the damn room. And then there’s Frye, who the movie can’t seem to decide whether or not he’s an asshole or honorable, and I don’t even want to go into the reasoning behind having him punch a watermelon. That just feels like a potential can of worms I don’t want to open. But perhaps the oddest thing about the movie, and also the most disappointing, is the monster itself. The film tries it’s best to build this thing up as some kind of “Big Bad”, but when it’s finally revealed, it’s not anywhere close enough to live up to the hype. This is of course assuming you didn’t blink at any point during the movie, because I’m pretty sure this thing only had about 10-seconds of screen time, total. And even then I may be overestimating. I’m sure his limited exposure boiled down to the film’s low budget, because if you look at still shots of this thing it sort of looks like some kind of bloated pig skull. Which is doubly odd, because later in the movie when Madeline finally finishes her art restoration work on the church’s old Icon, she reveals an ancient under-painting depicting what the creature is supposed to look like, and the two visuals are absolutely nothing alike. The thing looks like a Greek version of a werewolf, which begs the question of what a canine is doing swimming and living in the ocean like he’s the Mediterranean version of Jaws. Even more puzzling, (and I’m sorry, I know this is a lot of puzzling,) is that at several points in the film, the movie shows us this odd black slime substance and implies that it’s left by the creature. Yet when we finally see the monster, it’s completely pale. There isn’t any kind of dark substance anywhere on it. No hair, no fur, nothing. So what did the black slimy substance come from? Is it’s absence on the creature intentional, or an accident due to the water not reacting well to the monster hand-puppet? Nobody knows, and in the end, nobody’s gonna care, because the filmmakers certainly didn’t seem to bother to.

All that aside, the film’s biggest problem is undeniably it’s pacing. For a movie about an ancient sea monster, the film probably spends about 75% of the run time just having the characters talking to one another. Do they spend most of that time talking about plot related items? Gods no. So what do they spend their time discussing instead? Hell if I could tell you, and I just watched the friggin’ film. At one point they talk about Othello, probably because that’s one of Jones’ most lauded roles and he wrote a clause into his contract about having to have one Shakespeare scene in the film (presumably), but beyond that it’s mostly forgettable chatter. Oh, there are a couple of important points mingled in the midst of everything, but beyond the first few minutes and the last twenty, the rest of the movie is basically forgettable. The film’s one saving grace is probably it’s visuals, which are in no small way aided by it’s excellent location. Because let’s be honest, it’d be pretty hard to screw up and make a Greek island NOT look pretty. But the movie also has a solid sense of color and scene composition, so at the very least the film is always rather pleasing to look at. If only the other elements of the film could have been so lucky.

Alas, despite it’s neat premise and potential, Blood Tide ends up being a rather disappointing film. You’ve got very little plot, very little tension, and a lame, non-threatening, almost non-existent monster. In short, it’s just dull. All the good acting in the world can’t help fix it’s many flaws. But hey, on the bright side the film looks lovely due to being shot on location. Which means all the actors got a sweet trip to Greece. For their sakes I hope they had fun and all their checks cleared. That way at least something good came out of this movie.

Blood Tide is available on a variety of streaming services.

Blood Tide is also available on DVD and Bluray. 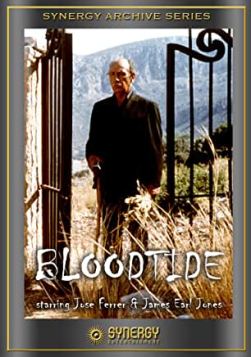