The evil, murderous fowl known as Turkie, returns to wreak havoc upon a new batch of unsuspecting strangers on his search to recover the last remaining copy of the infamous “Thankskilling 2”. On his quest, he has to contend with the wig-wearing creators of Thanksgiving Land, a crude rapping grandma, a robot with a laser cannon on its arm, a gay space worm, and Yomi, a puppet in search of her mind. Will this crass, ragtag team of hopelessly inept humans and muppets be able to stop the killer clucker? More importantly, will anybody care?

The filmmakers certainly didn’t seem to

And here, ladies and gentlemen, we see the absolute horrors that can be wrought upon the earth from something as seemingly innocuously innocent as a Kickstarter campaign. This movie is just so all over the damn place I don’t know where to begin. Where the first film was the cheap and ridiculous conclusion of a couple thousand dollars, a group of friends and a dream, this sequel, which managed to raise over $100,000 during its publicly funded campaign, proves that more money does not necessarily buy a better product. The only improvement upon the original is that it’s clear that the production values have gone up immensely, though a lot of things seem to have remained purposefully cheap for consistency’s sake. But that’s pretty much where all the improvements end. Everything else just feels like a giant cluster brought upon the masses by not knowing what to do with all that extra dough. You know that saying that talks about how purposefully limiting yourself can foster creativity? Well, turns out creativity was not the filmmakers problem. The problem was that they should have used some of that extra money to hire someone to keep that creativity in check.

I could have gone my whole life without seeing this. Thanks, movie.

Probably the biggest change from the first film, is that the sequel can no longer be labeled a monster movie or a slasher. Hell, it’s actually impossible to even try to label it as a horror film. Now it’s more of an adventure film with a shift of focus from the perceived main character. Unlike the first movie, the sequel spends the absolute bare minimum amount of time focusing on the murderous bird. Were you hoping he’d change into a bunch of corney disguises to trick some idiots before he kills them? Well, too damn bad, because the killer turkey only manages to kill one human during the entire run. While he’s actually fairly prominent in the beginning, after that he sort of fades into the background, and it’s like they turned him into an afterthought in his own movie. Instead, the film’s main focus is on the dim-witted hand puppet Yomi and all the shit she has to go through in the search for her mind. It’s Yomi we spend all our time watching, as she’s forced to traverse through the real world, Featherworld and Turkey Hell, and all because she accidentally stumbled upon the last remaining copy of a crappy movie she had no interest in, and an old turkey who thinks he’s Gandalf gave her a quest saying she had to stop the evil, wise-cracking bird from hell. So yeah, it’s an adventure film filled with a bunch of sleazy, pervy, raunchy muppet rejects and a few bewildered humans. It’s like some weird abomination of The Dark Crystal crossed with Avenue Q. Which is fine if you’re into those kinds of things, but I can’t help but feel that the people who funded this movie were likely wildly disappointed with the huge left turn the story took, especially when they were told they were getting a killer talking turkey in space and…. Ended up with this instead.

Although, I guess I’m being kind of generous here saying that this thing has a story. The script and story-line of this thing is so damn muddled it’s not even funny. Well, scratch that. That’s not exactly true. There is a basic story here, it’s just ridiculously basic. Turkie wants the movie (and before you ask, no, there isn’t a Thankskilling 2, that’s part of the joke) to use it in some sort of nefarious scheme (that makes no sense), Turkie then finds the movie and setsforth to complete his nefarious plan, and the brainless hand puppet has to stop him. See, simple. The problem is all the miscellaneous crap in between that ends up horribly muddling things. It’s like the reality of all that Kickstarter money went straight to the creators heads and they couldn’t figure out what to do with all of it, and so they simply added everything they could fucking think of and decided to let the viewer sort it all out. Robots, worms, spaceships, dead turkey children, turkey zombies, giant turkeys, dumb muppets, raunchy muppets, talking machinery, chainsaws, rats, wigs, hell, dreamscapes, music videos (two of them even!), long pikes, pervy animated cats, commercials, retro graphics, lasers, inappropriately placed wormholes, random references, sci-fi, fantasy…. You name a movie cliche and this film probably tried to stuff it up in here somewhere. Forget throwing in everything but the kitchen sink, these guys found the sink, then found an identical house with the same sink and threw all that in there too. The result is a convoluted mess that was meant to be a shocking and ridiculously over the top spoof, but there’s just so much of it that it just turns the movie into an overly-long headache. Pointless scenes that could have been funny if they’d lasted a few seconds end up dragging on for minutes, and by the time you’ll hope you’re close to the end you’ll pause the film, only to realize that you’ve barely reached the halfway point. I don’t know what the filmmakers were thinking of when they got their funds, but I wish one of the first things they thought about had been an editor. Maybe then the movie wouldn’t have ended up being longer than the first film, but with only half the story.

The only things that the filmmakers really improved upon were the visuals. Where the first film had little more than a turkey hand puppet, a tent and a bucket of blood to call it’s own, the sequel has a lot more impressive chops behind it. This film has multiple puppets and sets and costumes and props and the budget for effects, and hell, even art direction, all things sorely lacking from their last effort. Sure, a lot of the effects look horribly cheesy, but most of them were meant to look that way, so I feel that, at least, is forgivable. You can really tell that they were trying, and at least visually, their efforts paid off.

I don’t know what I was expecting from Thankskilling 3, but it certainly wasn’t what I got, and I have a sneaking suspicion it’s not really what the Kickstarter backers thought they were going to get either. I mean, my expectations after seeing the first film were already low, but they weren’t, like, this low. While I do like some of the things they were trying to do, and appreciate all the tiny references they added relating to things like video games and horror movies, in the end all that extra money didn’t make the movie any more enjoyable than the first film. In fact, it may have just made it dumber. The shocks weren’t any more shocking, the jokes have already been done to death (and done better), in countless movies before, and the story, what little of it there is, was a mess. I know the filmmakers were going for some sort of satirical holiday/horror spoof, but what they ended up giving us was a boring, LSD induced mess. Sure, they got all the craziness down thanks to the LSD, but they left out all the fun from the first movie too. And to add insult to injury, they essentially made the ridiculous concept of the murderous, talking killer turkey, into a secondary auxiliary character. I’m confused, movie. Wasn’t he supposed to be the film’s main draw?

When I started this movie I was expecting it to be “So bad, it’s good.” But it wasn’t. It was just boring and I was just disappointed. If you like spoofs and the first Thankskilling, then you might want to see this for curiosity’s sake. But if you didn’t care for that film, then I can’t think of anything here that would sway your opinion.

As for everyone else…You’ll probably want to find something else to watch.

Thankskilling 3 is available on a variety of streaming services, including free on Tubi TV 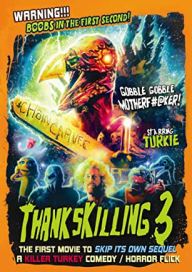