AKA: Embalmed
AKA: Hall of Death

Ever since her father drowned in their swimming pool, his daughter Christie has been having terrible nightmares about him being murdered by a man in a black hooded robe and she’s now convinced the same man is following her during the day. Compounding her fear and sorrow, Christie’s mother dismisses her concerns as simply a byproduct of recent trauma. Meanwhile, Christie’s boyfriend Gregg secretly witnesses a bizarre seance in the town’s local mortuary presided over by the local mortician and attended by a group of women, with Christie’s mother among them. Now more convinced than ever that her dreams are real and something sinister really did happen to her father, Christie and Gregg decide to go to the mortuary and do some investigating themselves. But while Christie is about to find out the truth regarding her father’s death, she’s also about to learn some secrets that she would have preferred to have left buried. Despite the suggestions in the promotional materials such as the film’s poster, most of which show a hand reaching out of the ground in front of a tombstone, Mortuary is, in fact, NOT a zombie movie. So let’s just nix any potential living-dead expectations right off the bat. No, instead Mortuary is an American slasher from the early nineteen eighties. There’s also a bit of included mystery involved concerning the main character’s mother and her possible involvement with the local funeral home director and her participation in a “satanic” cult. But the film only spends a hot second investigating those particular plot points before swiftly ditching them for the obvious red herrings that they are. So while the movie may include the typical slasher “mystery angle”, it really forgoes much of the mystery and sticks to the slashing. But, like I said, this is a very early 80’s slasher, one made before a lot of familiar slasher tropes really became standardized. So while it does fit the definition of a slasher, there’s a lot of unique personality features here to help it stand out from some of what would come later.

For starters, a lot of early slashers tried to outdo one another by focusing on high levels of violence, gore and nudity. And while there is quite a bit of the latter, both from living and ‘dead’ humans, the film is actually pretty sparse when it comes to the former two, which is actually pretty surprising when compared to most slashers in general. Rather than the blood and guts, the film instead tries to focus more on drama and suspense, which at times can be both a blessing and a hindrance. For instance, Christie’s determination to find out who killed her father adds some nice depth that you don’t typically see in slashers, but sometimes the film pushes that particular narrative too much, to the point where it feels a bit hamfisted. Then there’s the atmosphere, which the film actually successfully pulls off in spades. There’s some excellent lighting and a slow build up of tension throughout the film that includes masked figures, questionable motives and suspicious characters. But then the film tries to flip the script and starts trying WAY too hard to accelerate the heebie-jeebies by attempting to push a possible supernatural element to the proceedings. Which would be fine, and maybe even funny if their efforts weren’t so ridiculously pitiful. The film’s attempt at suggesting the supernatural is exhibited by flickering lights accompanied by an annoying disco soundtrack, and a slightly wiggly table seen during a seance. Meaning their ‘evil spirit’ can be explained away with faulty wiring and a wonky table leg, or in this case a perfectly good table with a crew member awkwardly sitting under it shaking it back and forth. So while the movie may have some good ideas, I feel like it could have greatly benefited from one or two more editing sessions so it’s execution could have come across just a little more smoothly. Like, it’s there, but it’s just not quite there, if that makes any sense.

Hey, Ernie! I know it’s cramped down there, but do you think you can make the table shaking just a little more ominous?

Then there’s the film’s design choices which, honestly, are kind of all over the place. I mean, for the most part everything looks pretty solid. The empty warehouse and the funeral home are naturally logical choices to film and fit in well with the overall theme, and Christie’s house is isolated, but it and the surrounding grounds are also relatively expansive, so you’re not just regulated to just a couple rooms to look at. But then the film throws in some odd curve-ball sights and scene locations. Like having Christie and her boyfriend meet up in a cemetery to talk about Ghregg’s missing friend and the strange things going on. Like, why are you there? Was there literally nowhere else to have this conversation? I get that having the conversation itself makes sense, but why at the cemetery? And even if Christie was visiting her father’s grave, which the film never mentions, Ghregg’s decision to just casually drop “oh yeah, I saw your mom at a seance in the warehouse the other night.” is still hella weird. Oh well. Perhaps it’s just another thing to chalk up to low-budget film-making. Seriously, were there, like, NO diners open? Maybe a nice park? Coffee shop? Nothing!?

As far as the acting goes, Mortuary is pretty standard fare. The characters are all appealing and attractive enough and fit their roles adequately. The one standout is the ever entertaining Bill Paxton, seen here in one of his first feature roles. Paxton plays the troubled son of the funeral home director, and honestly, he’s just a friggin’ hoot. Paxton essentially hams up his role for the camera, and you can tell he’s just giving his all, despite some of the absurd dialogue and actions he’s meant to perform. At one point they have him essentially prancing through the cemetery with flowers in his hand and a goofy grin on his face and you know, god bless him, but he manages to pull it off while only looking mildly ridiculous. It was no small feat, believe you me. Quite honestly, his exuberant performance alone may be the sole reason that makes the movie worth watching.

The face of a man who KNOWS he’s in a weird horror movie and doesn’t care.

In the end, I enjoyed my time with Mortuary, but I know that my experience will likely not be the norm. The movie is nice to look at and has some great atmosphere and music, but it also has some annoying plot holes, pacing issues and odd design choices (including some absolutely hideous wallpaper). And while the acting is just okay, with the exception of the excellent work of Bill Paxton, some of the dialogue is going to be a bit too cheesy for most tastes. So sadly, overall the film ends up being rather unremarkable. Beyond Paxton, there’s really nothing here that stands out. It’s not particularly scary, so horror fans will be disappointed. The violence and gore fanatics will be let down by the lack of their two main draws. And those who enjoy suspense will likely be perturbed by the reveal of the killer about halfway through the film. I still found it entertaining for its visuals and oddities, but unless you’re a big fan of slashers, atmosphere, 80s horror films or Bill Paxton, I think most will likely be underwhelmed by this little slasher.
Mortuary is available on several streaming services, including free on Tubi TV.
It is also available on DVD and Bluray. 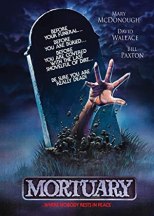 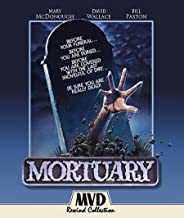