The Baby is about social worker Ann Gentry, who takes on a new case involving the Wadsworth family. The Wadsworths are a bit of an odd bunch. The family is run by the hard-nosed Mrs. Wadsworth (there is no Mr. Wadsworth), a woman who lives with her two adult daughters, Alba and Germaine, and her son, Baby. Baby, it turns out, is a special needs child, thus Ann’s involvement. He cannot walk (though he crawls), can’t feed himself, and cannot communicate in anything deeper than baby gibberish. This would all be fine-and-dandy, and completely ordinary, save for the fact that Baby has the body of a twenty-one year old man.

Once you hit a certain age, that airplane game takes on a much creepier undertone.

Ann takes a very keen interest in Baby. So much so that she seems to be neglecting her other cases. She seems sincere in her efforts to help Baby grow and develop, despite the reluctance of the family, but as the movie progresses you begin to suspect that she may harbor ulterior motives. 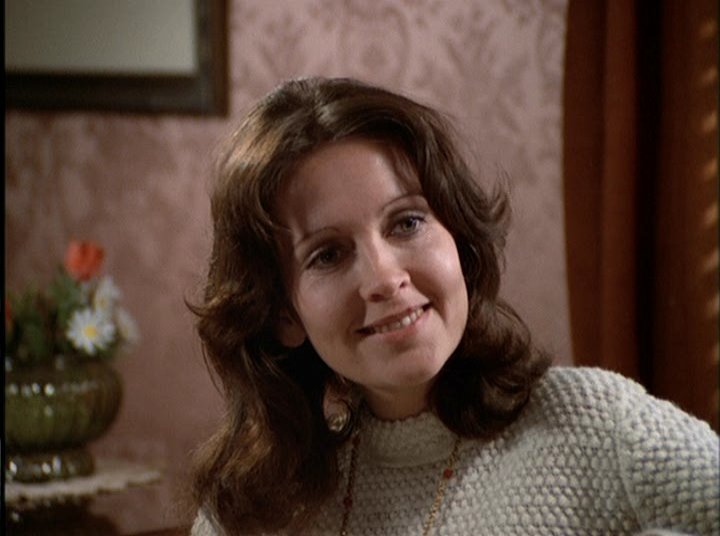 Don’t even try that sweet smile on me. You up to somethin’.

And thus begins a sort of tug of war over what is best for Baby.

Let me start by saying that The Baby is kind of hard to describe. Most movie sites that categorize this sort of thing label it a horror. It sort of is, and yet sort of isn’t. It’s certainly not as lurid as that movie poster makes it out to be. There is violence and perversion, sure, but much less than one might expect, and what you do get is dolled out in relatively small doses and doesn’t dominate the film. If anything, it’s could probably be more accurately described as a horror-drama or even a thriller….. a very odd thriller.

And perhaps a little kinky, depending on what you’re into.

Probably the oddest things about it is how decidedly not odd everything in the movie is played out to be. The whole point of the movie, it’s gimmick if you will, is that Baby is a full-grown man. If Baby were, you know, a baby, then there would be nothing sensational about the sensationalized premise. It’s part of what makes the film feel ‘off’, which, in some ways is good, but in others not.

This is of course partly beneficial, because by being an adult man anything Baby does takes on an extra level of creepiness. Even something as mundane as crawling after a ball, or being fed, gives the viewer an added feeling of unease. And when things take a turn for the not so mundane, and you start adding elements in like sexual tension, well then, all the better.

At the other end of the ‘off’ spectrum is how the other cast members treat Baby. Baby’s name is just that, Baby. He was never given or called by anything else and his mother and sisters treat him as if he were an infant for the duration of the film. Ann treats him that way as well, stroking his hair as she walks past (more like a pet, really) and talking to him as if he were a toddler, even after she voices an interest in trying to help him grow and possibly mature. This behavior is never really addressed. Everyone just sort of takes Baby’s condition (whatever it may be) at face value, without question. No one goes “Huh?….” or “Hey, isn’t that odd that a grown man is acting like an infant?” They don’t even show any real interest in taking him to be checked out by a doctor. And the entire thing is played completely straight, as if it were something happening down the street in any town. There’s not a hint of irony or campy-ness anywhere. It’s such a leap of faith that I found it a bit perplexing.

As for the cast, they’re a bit of a mixed bag. Anjanette Comer (Ann) does not always come off as the best protagonist, though I did get the impression that she was trying. Her performance does pick up towards the end, but she hovers around dull for the better part of the movie.

Ruth Roman’s (Mrs. Wadsworths) performance however, is splendid. She has just the right mix of compassion and malice to get her character to work. She completely outshines the rest of her cast mates and her efforts go great lengths in helping to ground the odd premise of the movie. 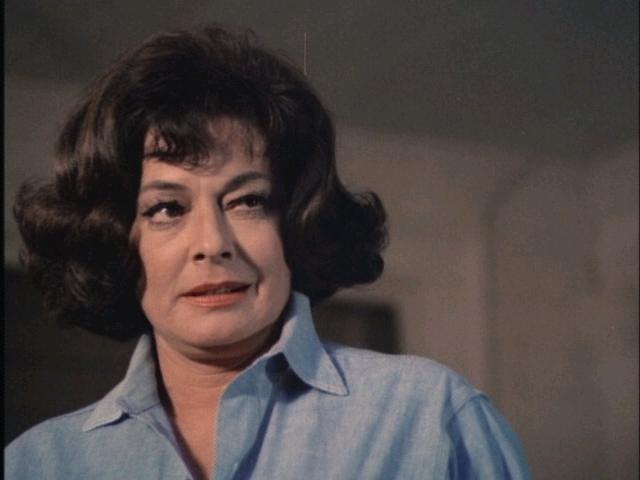 Believe it or not, this is her happy face.

And then there’s David Manzy as Baby. His performance will either try your patience or make you laugh with how over the top it is (the dubbed baby noises alone may push you over the edge one way or another). There is very little believability here, if any, which is a shame, as your tolerance of him and his performance is needed for the premise of the movie to really work.

Baby or not, he looks a little too happy about that diaper change.

The rest of the cast’s performances, despite hovering around the level of B-movie fare, are serviceable most of the time. Though some of their hairstyle choices leave much to be desired.

Some people shouldn’t be allowed anywhere near a tease comb.

The Baby ends up being an odd movie with an interesting premise. It certainly had the potential to be a lot more exploitative than it ended up being, and perhaps if it had been it would be more well known and would have developed more of a cult following. It does touch upon some issues of violence, incest and abuse

It takes a special kind of family to even think of using a cattle prod.

But there is very little here that could be considered explicit (the movie is only rated PG, after all), so anyone looking for gore or nudity is going to be disappointed. It has some decent and, in some cases, excellent acting, as well as a nice eye for sets and art direction, but it isn’t for everyone. It requires a great suspension of belief on the part of the viewer, and has some uncomfortable themes that may turn some people off. But if you’re in the mood for something a little off the norm, then you can’t go wrong here. It’s also got a twist ending that most people will see coming, but not completely. It really is it’s own kind of morbid. So if you’re looking for something a little strange or different, you may want to look more into The Baby. Strange as it is, it’s definitely something I’d recommend to horror and thriller fans to see at least once.

The Baby is available to watch on several streaming services.