Mike goes off on his own to try to find a way to defeat The Tall Man, forcing Reggie to go (on yet another long car trip) after him. Along the way Reggie encounters zombies and a stranded motorist, while Mike tries to learn about the The Tall Man and come up with a plan that will help him thwart is lifelong nemesis…out in the desert.

Even in the desert Reggie finds all the hot babes.

Phantasm IV was released in 1998, 19 years after the original, and this is the point in the series where the low budget starts to show. The setting has been cut down to 90% dessert, and action scenes have been cut drastically. What is left we’ve seen before: car flip, explosion, aggressive dead things, and sphere attacks. Staples to be sure, but there’s nothing here that hasn’t been done several times in the series before, though perhaps if it had been the  new the toned down action could be more forgiving. Instead Phantasm IV focuses more on the metaphysical style from the first and third films. But what it lacks in action, it tries to make up for in atmosphere. Mike’s sleepless dreams of the past, including unused flashbacks and alternate reality footage from the first Phantasm, is an interesting money saving technique. Watching new footage of a young and old Mike, both of whom are unmistakably played by the same actor is both intriguing and a little unsettling.

The biggest problem with Phantasm IV is the big build up that results in zero answers. The story starts off suggesting a quest for these answers (Who is the Tall Man? What makes him Tick? Why is he so fixated on Mike?), but in the end we know no more than we did by the end of Phantasm III. Coscarelli doesn’t give up anything, and the surreal moments and lack of narrative progression suggests that either he isn’t even sure where this is going or he wants viewers to make their own interpretation. The scene at the end suggests the later, but at this point it’s hard to tell.

One of my other gripes with the movie is how they handled the exit of Tim. Or perhaps I should say how they didn’t handle it, since there’s no mention of him in the fourth installment whatsoever. No one says his name, no one mourns his death(?) and he’s not even covered in a flashback. There’s nothing. Nadda. Zip. I mean, I get why he’s not in it. After four/five years he was probably too old and pimply to fit the part anymore, but he could have at least gotten a mention. Hell, even Liz got a fake decapitated head as a sendoff.

Phantasm IV is definitely the weakest in the series. It uses the constraints thrust upon it by its low budget to play to the series strengths, but in the end much of its story comes off as empty filler. It certainly has its moments of fun and quiet beauty (thanks desert), but the ground it covers is too rehashed and unfocused. Top that off with one of the vaguest of vague endings and there’s a good chance you’ll end up either hurting yourself by thinking too hard or wanting to tear your hair out with the knowledge that there is still a mountain of unanswered questions that you haven’t been given an answer to.

Phantasm IV is available for streaming via Amazon Prime.

It is also available on Bluray. 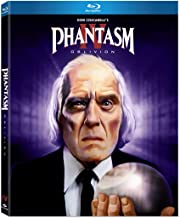