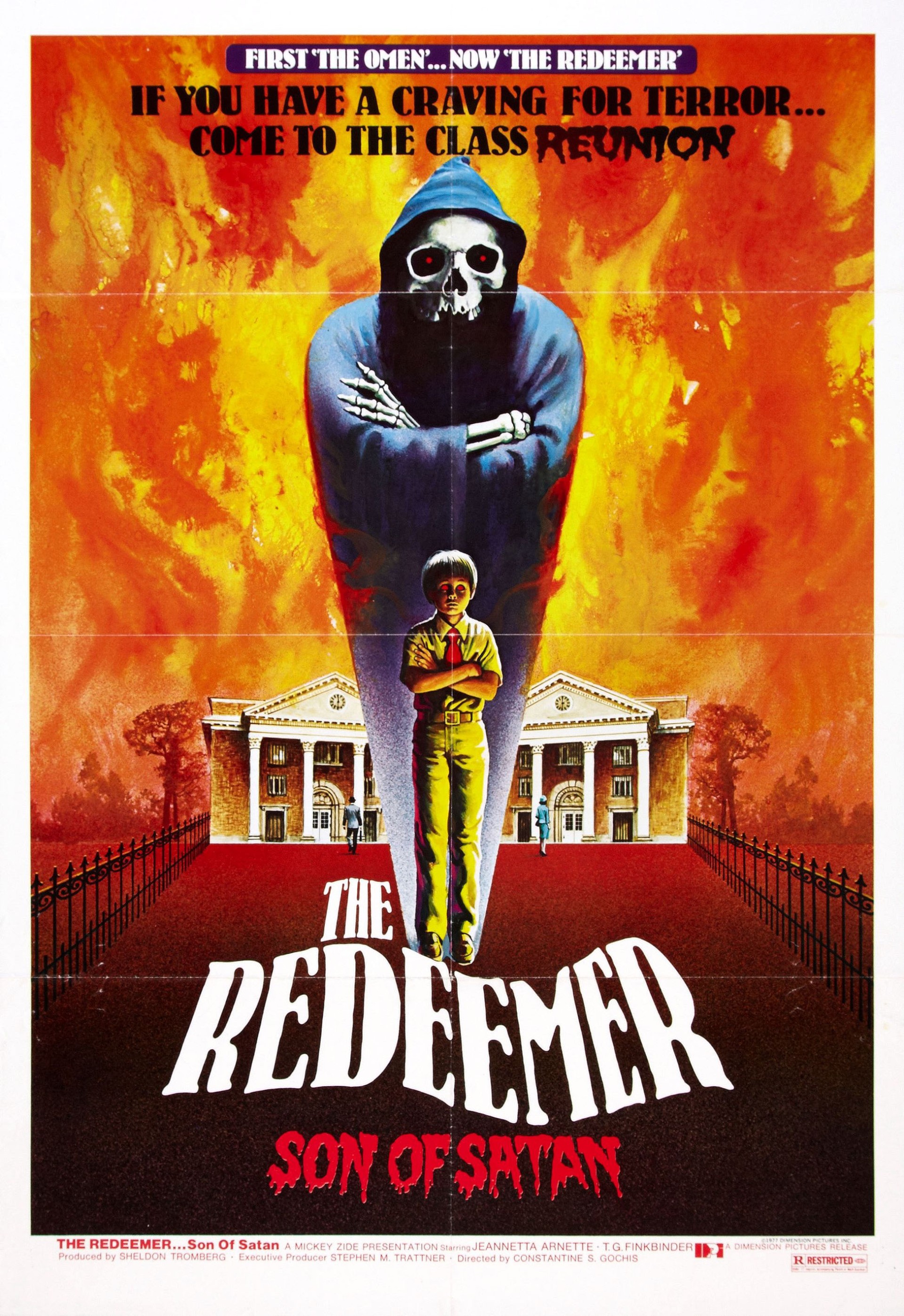 A murderous preacher with a flair for the dramatic traps a group of six former classmates in an isolated, abandoned school after luring them there on the pretext of a class reunion. Deeming the old friends ‘sinners’ and wishing to ‘redeem’ them, the preacher locks them all in their old, run-down school and starts to systematically knock them off one by one.

The Redeemer is a sedo-slasher with some (very confusing) religious undertones from the late 1970s. It’s very much a low budget, low spectacle type of affair, and as a result is filled with a lot of corny lines and heaping doses of confusion. But it’s also a film that seems dead-set (heh) on taking itself, and it’s message, quite seriously. The only problem is that I’m not quite sure what that message is and, looking back at it, I’m not 100% sure if the film knows what it is either. The film’s main problem is it’s lack of exposition. There’s a lot of interesting and interwoven imagery going on here, but very little of it is actually explained, leaving the viewer to sit and wonder how it all actually ties together. The film opens with what looks like a water-filled quarry as a boy, fully clothed and fist held high, slowly emerges from the lake, walks through the woods and then…takes a bus to church?

We eventually find out the boy’s name is Christopher, but his role is never clearly formed. It’s clear he’s supernatural in nature, and that he gives a man, who we later find out is the priest of the church he visits, supernatural powers to…redeem, I guess, and an…extra thumb? The extra thumb is never fully explained, though I infer it’s some sort of marking to show that the priest is Christopher’s emissary…or something. I don’t know. Like I said, it’s never acknowledged, let alone explained. I don’t know. If I were a vengeful being I’d pick a better symbol to represent myself.

Then there’s the reasoning for choosing these particular six individuals to ‘redeem.’ Short of showing us that they all basically represent (and rather vaguely, I might add) one or more of the seven deadly sins (even though there’s only six of them), no real explanation is given for why these particular people are being punished. We meet them before they show up at the school and, other than being a bit annoying, I can’t see anything they’ve done that really justifies killing them. They’re not shown to be murderers, rapists or serial abusers. They really just seem like random people living their lives. The back of one of the VHS copies I saw online mentioned something about the priest being one of their former classmates that they once tormented during their school days, but unless there’s a cut scene on one of those old VHS tapes out there somewhere that didn’t make it onto this cut of the film, that explanation is patently false. No such reasoning is given in the film. In fact, the characters themselves wonder several times why it is that they’re being punished. The closest thing we get to a ‘reason’ is that all 6 former classmates were all placed on the same yearbook page… No, really. That’s it. The film shows us the killer cutting his victim’s faces out of a yearbook, interspersed with scenes from their current lives, suggesting some kind of school-related reasoning and then it never actually gets around to giving us one. Now, if there isn’t one, ‘picking victims out of a yearbook because they’re all on the same page’ seems like a rather arbitrary way to choose to kill someone, but perhaps that was meant to be part of the horror. Here’s some random dude who killed six random people he randomly picked out of some random book he found in the office upstairs. And it might have felt that way, except the movie goes out of it’s way to try to set up both a school and spiritual angle for these people to be punished, and then it never really bothers to follow up on either of them. It’s just yet another example of strangeness in a movie filled with strangeness.

Moment of strangeness #31: WTF is this even supposed to be?

And don’t even get me started on the logic going on in the rest of the movie. After he picked out his victims, how did the killer manage to get them to all agree to show up at the reunion? One of them is supposed to be a movie star and the other is a multi-millionaire, and you expect me to believe they willingly showed up at that dump of a school? If the whole goal was to kill those six classmates for their sins, why did the murderer kill the school’s groundskeeper? If the goal was just to kill them why bother to set up the gym with all the streamers? What’s with the theatrics? Alas, we will never know.

That’s not how you start a swim meet. One of these people is being punished for being gay, and I guarentee it’s not the one you think. The plot is filled with much befuddlement, is what I’m saying.

Judging by the video quality, the movie was not only low-budget, but it also looks like the master print wasn’t treated particularly well. And by that I mean that it looks like someone left it in a damp, dingy basement to rot for 30 years. The movie is filled with dust and grain and scratches galore. There are also quite a few instances of large streaks going up and down the film, the colors mutate and there are more than a couple of instances where the audio track will dip or struggle noticeably (my ears!). I get this is a cult film, but it would have been nice if at least some effort had been put into prettying it up. Thankfully you can still see enough to tell what’s going on, and there are some rather well choreographed scenes, but the flaws still end up being quite noticeable and glaring.

That vertical line was so prevalent it was almost its own character.

Being a low-budget oddity, the film’s acting is serviceable at best. The actors do put in quite a bit of effort, but the characterization for the victims is so thin that there really wasn’t much they could work with. The only standout is the killer, and that’s just because he’s a certifiable nut with an excessive flair for theatrics. He puts on a ridiculous play in the auditorium complete with set-pieces and a giant puppet (who I’m sure was just a guy in a costume) and then just goes on a spiel about sin and yadda yadda yadda, and if you can actually make out his words (which, with his voice, can be a serious struggle sometimes, let’s be real) he’s just totally serious about everything he’s saying, but his over-the-top delivery makes any respect you might have had for his master plan go right up in smoke. I know a lot of denominations have preachers that can be a little over-dramatic, but this guy’s almost like a televangelist on crack. It’s something that must be seen to be believed.

Dude spent more time making props than the did on the whole ‘murder’ plan.

I would like to take this moment to apologize to any snake handlers I may have mocked in the past.

We’re in this horrible movie!

Those expecting a lot of gore and/or nudity are going to be a bit disappointed. There is no nudity to speak of, and all the blood, of which there is quite a bit, is all unrealistically bright red. Most of the murders are also pretty mundane (lots of plain-ole’ shootings, boo), but the movie does have a couple of good death scenes interspersed amid all the confusion, including a drawn-out drowning and one dude getting charbroiled in the groin. It may not be much, all things considered, but at least it keeps the film from being completely dull. The Redeemer: Son of Satan is an oddity of a film. It feels like it couldn’t figure out whether or not it wanted to be a slasher or a religious propaganda piece, but the plot winds up being so damn befuddling that it misses the mark on both. The film’s rationalization is incoherent, much of the editing is choppy as hell, the soundtrack is grating, the characters are cliche and boring and the quality of the film itself is terrible. The only thing really interesting about it is the crazy preacher, but after a while even he starts to become incomprehensible, so I’m not sure the movie can end up riding by solely on his coattails. Does the movie still manage to be entertaining? Hell yes, but only because the bat-shit insanity and WTF-ery will keep you watching to the end just to see if any of it makes any kind of logical sense (hint: it doesn’t). Abandon hope all ye who enter here looking for any kind of cohesiveness. There is none to be had here.

The Redeemer: Son of Satan is available for streaming on Amazon Prime and Tubi TV.