TCM has a pattern where they show a bunch of re-runs for a couple of months during its Underground timeslot, before they start showing some new stuff again.  I’m honestly partial to the cheesy horror movies they tend to show, myself, but I do enjoy it when they mix it up a little, something they did when they aired 1974’s The Super Cops.

Before you get your hopes up, no, this is not a movie about two cape-crusading police officers. Let’s just get that out of the way now. The Super Cops is about officers, Dave Greenberg and Rob Hantz, two rookies straight out of the police academy in good old New York who want to make a difference. 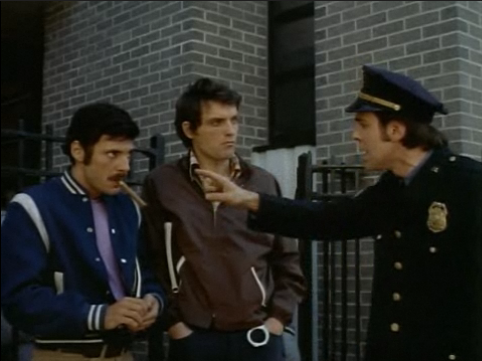 All the following screenshots were taken and edited from an itty-bitty video so that you all have some pretty pictures to look at. Sorry if they suck.

Eager to make it up the ranks quickly to detectives (and to rid themselves of the designation of “Traffic Cop”), the two of them start making arrests while they are still cadets. This doesn’t sit too well with their fellow officers or the higher-ups, many of whom are corrupt. This is early 70’s New York you see, and police corruption was a bit of a problem.

Realizing that the two of them cannot be bought, after graduation the powers that be assign the two to a particularly dangerous precinct in Brooklyn. Sadly, they find that this precinct is just as corrupt as the last.

Don’t be sad. At least we can get Nathan’s Hot Dogs for lunch now, right?

They manage to find one ally at the station, but aren’t given much encouragement. Undeterred, the two of them set their sights on the many drug dealers allowed to run rampant in the area. They make daring busts and stupidly courageous arrests, at one point jumping out of cardboard boxes and telling people to freeze. Despite their perceived best efforts, they are miraculously not shot by any startled druggies.

Why would you want to shoot me? I was in Slaughterhouse Five. You can’t shoot me.

Despite their best efforts, they are still perceived as a threat by the other police and they eventually turn their attention from the drug dealers to solving the corruption within their own midst.

We solemnly swear to bring all your corrupt asses in……to the best of our ability.

The Super Cops is based on a book by L.H. Whittemore, and tells the story of real-life New York City officers David Greenberg and Robert Hantz. Undoubtedly the movie whitewashed many of the men’s characteristics in favor of making a buddy cop movie, one of the earlier entries into the genre. 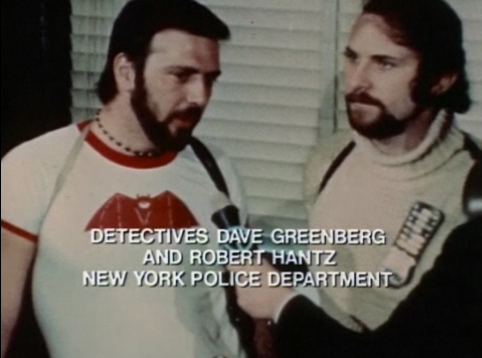 To give you an idea of what the movie is like you first have to know that it was directed by Gordon Parks, a veteran of blaxploitation, and the man who directed Shaft. Couple that with some decent actions scenes of people jumping through windows and onto wreaking balls and the same irreverence to authority as seen in Beverly Hills Cop and you’ve got a pretty good idea of what you’re getting into.

While it may not be a regular laugh a minute, it’s wiseass humor is refreshing and is a good way to satirize the police corruption at the time without making the real events and issues of the time seem to heavy.

The two actors play pretty well off one another. Leibman’s Greenberg is very charismatic, funny-man and he has a most excellent wiseass sneer that complements the material nicely. Selby on the other hand plays the obligatory straight man, complementing the pair nicely.

Aren’t they just adorable together?

The supporting cast is decent, but nothing to write home about. There are two exceptions. The first is Greenberg and Hantz Brooklyn captain, who’s so paranoid and yet so desperate to leave the precinct that he comically switches between stoically indifferent and get-me-the-hell-out-of-here mode at the drop of a hat. The other is Sara, the hooker/ex-stripper/informant, who’s weary and disenchanted performance was a nice contrast to the wacky antics of the two leads.

And a bra-less screen-cap. Because I care.

While the story moves along at a good clip, it can feel a little episodic at times. First they’re here, and then they’re there. I felt it could have used some more and better connecting elements.

Nevertheless, it was an interesting buddy cop movie with a very definitive 70’s feel that understandably reminded me a lot of movies like Shaft. I enjoyed the antics of the two ambitious officers. It may not have been Beverly Hills Cop or even Police Academy, but it was still an enjoyable experience.

Super Cops is available for rent on Amazon, iTunes and Hulu.