David and three friends head to his family’s cabin in the middle of the woods to help David’s junkie sister, Mia, detox from some un-named substance. When they get there, they realize that someone has broken in. Some time later they discover that whoever broke in has strung up dozens of dead cats in the cellar and left behind a plastic and barbed wire bound book.

David’s curious friend Eric unwisely takes and opens the tome and, despite clear attempts at concealment, utters four written words that unleash a horrible, damnable evil upon the small, well intentioned party. Further readings reveal that the evil being is called ‘The Abomination’ and he only needs five souls to return to the land of the living. Let’s see, how many people are in the cabin? One, two, three, fou-….

You can’t feel bad for Eric, though. He was given every hint possible to bury the book or shut the hell up.

The first five minutes of the movie establish that this isn’t going to be anything at all like it’s predecessors. So if you’re coming into this reboot of Evil Dead thinking it’s going to be at all similar to the first three films just because it has Raimi and Campbell’s names attached to it then ABANDON HOPE ALL YE WHO ENTER HERE. This ain’t that kind of movie.

While the original movies were best described as horror comedies, this new version of Evil Dead seems to ask the question “what would the Evil Dead movie have been like if it had been a hell of a lot more serious?”

If you want comedy, you’re not going to find it here. This new Evil Dead is much more rooted in our mundane, serious real world….well, as real as demon summonings are anyway. Transformations into hell spawn are a bit more subtle and gradual than previous incarnations: first the eyes change color, the first act of violence is usually against themselves, once possessed no one develops super human speed and starts flying around the room cackling madly. It’s all a bit more based in reality, making all the body horror featured here all the more horrific. 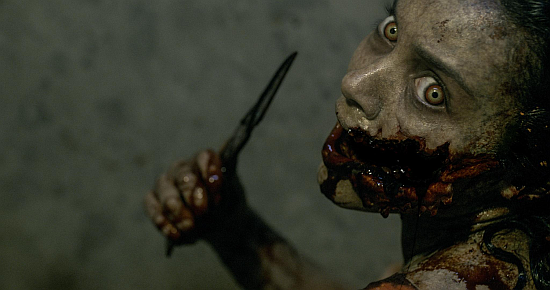 There are a couple of instances reminiscent of the over-the-top-ness of its predecessors, including instances were the level of the loss of blood probably should have killed a couple people… 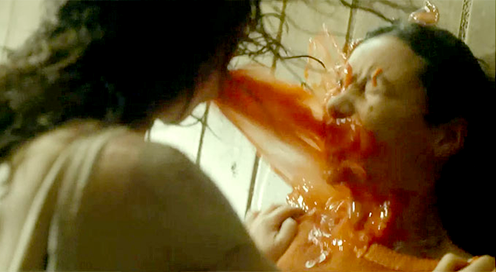 …but if you’re hoping they have some sort of humorous angle, than you will be disappointed. There is nothing even remotely funny going on in this movie. At all.

Also, if you’re hoping for a complete story rehash of the first film you’re not going to find that either. This reboot may follow the same basic outline of ‘kids in cabin release evil demon and die’, but it is it’s own distinctive tale. There is no character named Ash(ley) here for you to root for. These are all completely new kids and, unlike the first film, they come complete with their own backstories. They may not be very deep backstories, sure, but at least they have them, which is more than can be said for the original.

Not that the reboot lacks any similarities to the original. There’s still an unseen evil lurking in the woods waiting to be unleashed. The possessed are still murderous and twitchy as hell. The woods are still rape-y. Limbs are still lost. Demons still get locked in cellars. And the gore, my goodness, the gore. Once that blood starts flowing it practically doesn’t stop until it just feels like it’s raining blood. 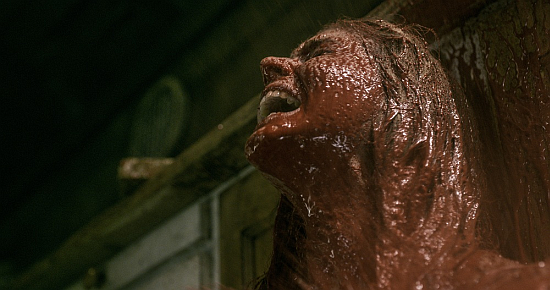 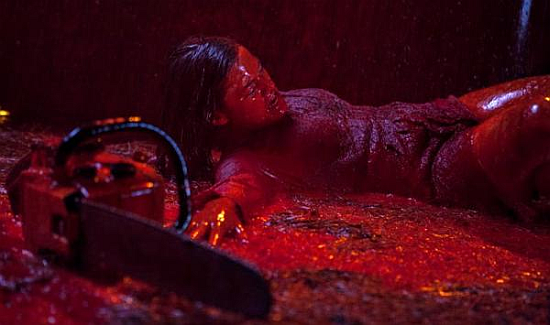 Well, actually at one point it does rain blood. Also, CHAINSAW! YAY!

And that doesn’t even address all the familiar sights around the cabin. The tone of the movie may be different from what came before, but that doesn’t mean it doesn’t throw several nods their way. There’s a lot of very familiar imagry in this reboot. Everything from the design of the cabin, to the car, to a reference to Linda’s necklace is included.

Hell, they even included a reference to Ash’s severed hand from the second film.

And there’s a dozen or so other props and callbacks that reference the earlier movies, including the clock on the wall, portions of dialogue and several instances in the script (like when David tries to get Mia the hell outta Dodge only to realize the bridge is out.) There’s a lot of nods going on here, I just couldn’t find any decent pictures of some of them (finding a shot of the hand was hellish enough.)

I may have given the impression so far that I didn’t really care for the movie, but that couldn’t be further from the truth. I really quite enjoy the reboot of Evil Dead. Despite its many differences, it gets a lot of things right. For instance, I like that it went out and did it’s own thing. I’m a firm believer that if you’re going to reboot something, than you need to make enough changes to make it worth the effort. It’s not fun watching a new movie with a fresh coat of paint and already know what’s going to happen. So props to them for that. 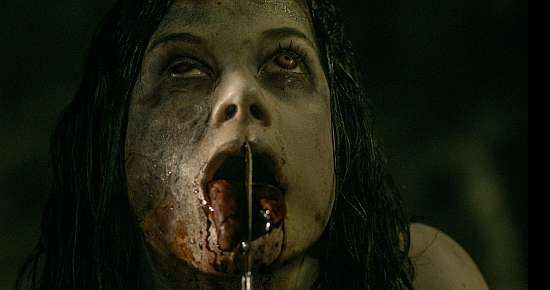 Also, the lighting and special effects seen here are pretty spectacular. There’s very little CGI at work here, most everything is makeup and practical effects. The cinematography is also pretty damn good. It may be quite different from Raimi, but if you can’t tell by some of those screenshots, it’s still very impressive.

And let’s not leave out the acting. While the first film had that B-movie charm going for it, the reboot actually had a sizable budget to work with and it shows in the performance of its actors. Jane Levy is great as Mia. She does psycho, junkie and terrified equally well and it was entertaining watching her possessed ass. The rest of the cast is also excellent. Their characters may not have been blissfully capable, but their acting sure was.

Where the movie sort of goes a bit off-kilter is parts of the plot and dialogue. For instance, why does the nurse friend Olivia insist on detoxing Mia out in the middle of nowhere after the slew of hanging dead cats were found? And she keeps insisting about it after Mia wrecks her car. What’s her last name? Ratched? And how the hell is Eric able to decipher the ancient gibberish in the new book of the dead?

As for the dialogue, some of it comes off as a bit, well, off. I don’t want to say cartoonish, but sometimes the words being spoken didn’t feel like they fit right. I know they were going for ‘evil demon dialogue,’ but some of what was being said didn’t feel like something an a murderous, ancient demon would say. But maybe that’s just me.

Then again, it’s a demon. They’re known for saying a lot of crazy shit, especially if they think it helps them get out of the basement.

I found this reboot of Evil Dead to be quite entertaining. In my eyes, it gets a lot more right than it does wrong. It’s a much darker take on the original trilogy that spawned it, but it’s still an enjoyable ride. The art direction is well done and the effects are impressive. It’s clever at some points, creepy at times and overwhelmingly bloody at others. I definitely has its flaws for sure. (The characters are given some depth, but it doesn’t follow through with them. Some intriguing ideas are brought up at the beginning, but aren’t fully explored. The possessed could have shambled just a little bit faster….) But overall I don’t feel it’s a bad addition to the series. If they made another one, I wouldn’t hesitate to go see it.

If you like your demon possessions with a little less comedy, feel free to give this one a try. There are worse ways to spend 91 minutes.