High school senior, Courtney, is having nightmares. And really, who could blame her? Several years ago she and her sister, Valerie, had to fight off a crazed drill-slinging killer and the memory of those events have taken their toll. Valerie is holled up in a mental institution and now Courtney is being plagued by strange dreams involving a dark, leather-clad loon wielding a drill-tipped guitar. The girl clearly needs a vacation. So when her gal-pals from her band invite her to a weekend trip at a condo one of their folks just bought Courtney jumps at the chance. But the first night of fun and games quickly morphs into a real-life nightmare as Courtney becomes unable to distinguish her dreams from reality, and the crazed Driller Killer from her nightmares becomes more and more real.

Though the real nightmare here may be some of these outfits.

While the first Slumber Party Massacre could be considered a dark comedy (and if memory serves the director has described it as such) Slumber Party Massacre II nixes that in favor of being a full-on spoof. Anyone who’s seen it and argues otherwise is just kidding themselves. This is not in any way similar to its predecessor, nor is it trying to be. No, Slumber Party Massacre II is ludicrous, wacky and, at times, downright head-scratch inducing. But whether you end up liking it or hating it, all will probably agree that it’s not something that they will be forgetting anytime soon.

One thing that really sets this film apart from the first movie (other than the intentional goofiness) is the music. Courtney and her friends are part of an all-girl band, so the film is peppered with musical interludes, some with the girls singing (or in this case, of 80s band Wednesday Week singing) and others just thrown in to correspond with scenes. There’s so many here that if they had thrown in one or two more the film could have had a full-blown horror musical on their hands. Hell, even the killer gets his own slightly raunchy musical number, complete with dance moves, so I’m kinda wondering why they didn’t go that route.

No. Scratch that. After watching this bit again I’m disappointed they didn’t go that route.

I mean, seriously, you watch this and tell me that wasn’t a huge missed opportunity.

Honestly, without the music to bolster it up, Slumber Party Massacre II is actually sort of…. Well, I struggle to come up with a descriptor better than dull. Most of the film is spent with the girls, with or without their boyfriends, as they deal with school, plan to go to the condo or hang out at the condo. This event planning and lounging is broken up by either the music, the occasional pillow fight, or by a flash of one of Courtneys strange dreams/visions, with the latter of which usually ending up being pretty mundane or strikingly familiar. Oh dear, the bath is spewing blood that…doesn’t exist. Well, thanks movie. You know, I know you were working on a tight budget, but at least give me a more inventive vision than something everyone’s seen a dozen times before. Okay, so Puss Face was a nice touch. If only we could have spent more than 5 seconds with her.

Admittedly, the good part kicks in when the Driller Killer finally breaks reality and shows up in the real world all Freddy Kruger style to bring the bloody mayhem. Unfortunately by that point it almost feels like too little, too late. The film clocks in at only 75 minutes, with about five minutes of that time being taken up by credits, and our leather-clad maniac doesn’t really show up until close to the 60-minute mark. Which is a real shame, because he’s easily the most memorable part of the whole movie. This scenery chewing gem is like The Fonz from Happy Days if he were evil and on a bad acid trip. He laughs, he sings, he dances and he slaughters his victims while he spews horrible movie-related one liners like a true rockstar. Figure of imagination or not, this is clearly a man who loves his work and I am upset the movie kept his true glory from us for an agonizingly long 50 minutes. 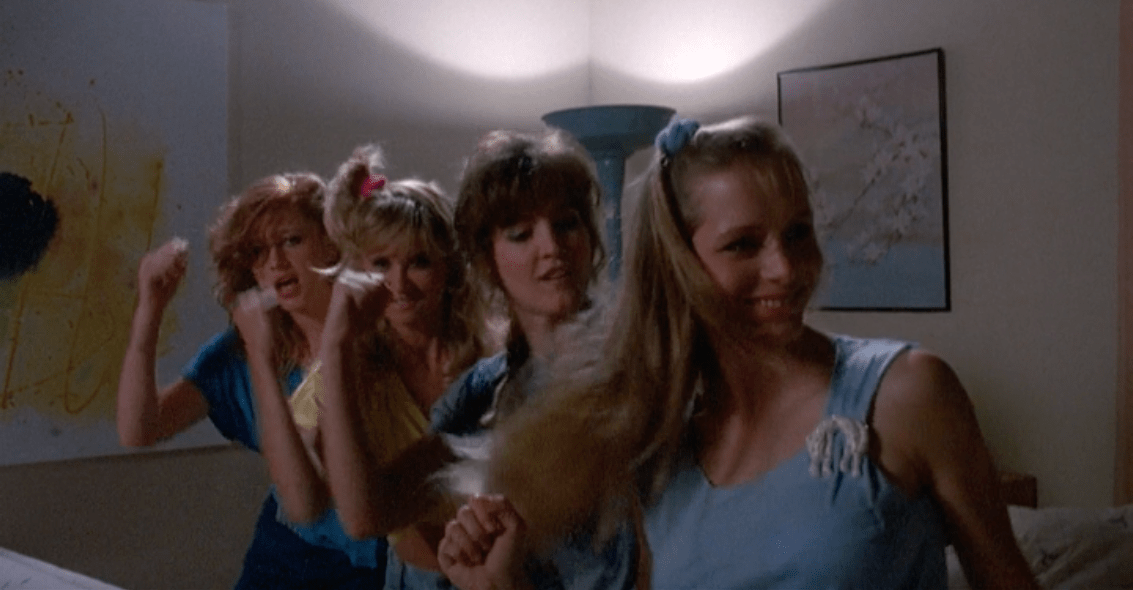 Think of all the pain you could have saved us from due to all the horrible dancing.

So, is Slumber Party Massacre II any good? It depends on what you’re looking for. If you’re looking for something that was like the first film or like a traditional slasher than you’re going to be disappointed. It’s more Nightmare on Elm Street than Slumber Party Massacre, but with more drills, more inane dialogue and less Freddy. But if you’re looking for something more unique, than this will definitely quench your thirst. I can’t currently think of anything else quite like it. Sure, it’s filled with a bunch of tropey teenagers, dumb dialouge, makes little sense and takes a hell of a long time to hit its stride, but once it hits it, it’s actually pretty entertaining. So if you like musicals, or at least can tolerate the musical aspect, you may find something to like here. At the very least, it’s short enough to justify a quick viewing for slasher fans.

It is also available on DVD, either by itself or as part of a Slumber Party Massacre Collection, and Bluray, but those two latter titles seem to be out of print.