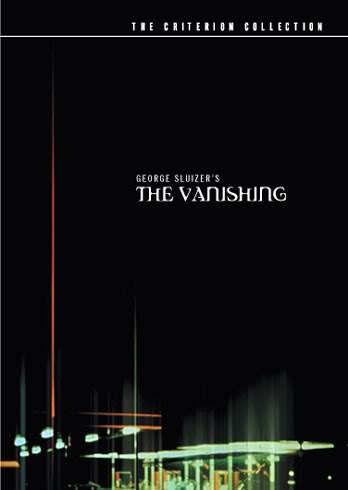 Yes. Another movie brought to you by TCM. You all should really be watching more of this channel. They’ve really got some good stuff on.

Anyway, The Vanishing is yet another Critierion release that TCM decided to show. (I didn’t know that when I was watching it. It just lends more credence to my theory that two groups have some sort of pact.)

A Dutch couple, Rex and Saskia, are going on a cycling trip in France. After some driving, talking, and a little bit of fighting… 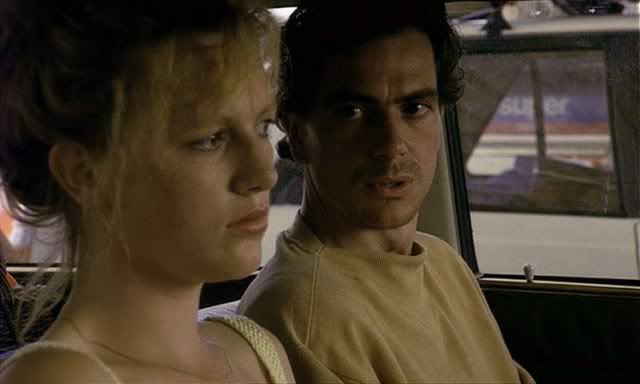 …they stop at a rest stop. They get some gas, stretch their legs, make up (kissy kissy face) and Saskia goes inside to get some drinks for the both of them….and doesn’t come back.

Rex waits and waits and contacts the authorities, but she’s nowhere to be found. The only proof Rex has that she was even there is a photo he took of the area where you can just barely make out her red hair. Other than that, there’s no sign of her.

Rex is understandably devastated. He spends the next three years in his own private crusade looking for her. He even gives up his new girlfriend in favor of the search, more concerned about finding out Saskia’s ultimate fate than he is about the details of his own life. 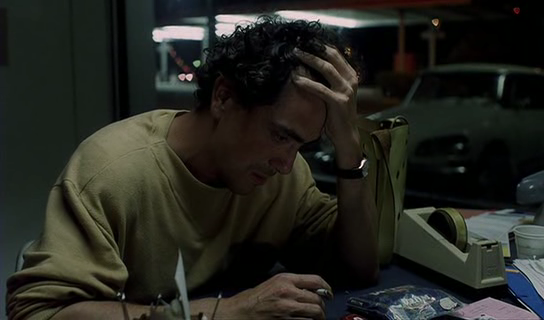 Damned crossword puzzle. You’re supposed to give me a clue.

He finally makes an impassioned plea on French television for any info about what happened to Saskia. And what do you know. He’s in luck, as the killer is watching the broadcast with raped attention and is so moved by Rex’s plea that he decided to contact him… and explain everything. 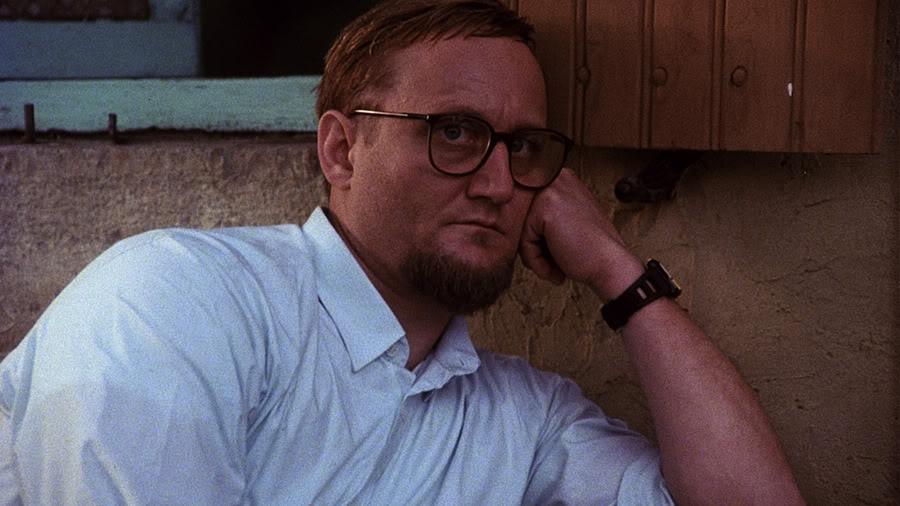 If only all psychopaths were so considerate.

The Vanishing is a merciless and unnerving thriller. What makes it that way is, in part, because it’s so relatable. On an ordinary day, an ordinary man is separated from his love at the most mundane of places, a gas station. This isn’t some spy story. It’s something that could happen to anyone on any given day and it’s that utter simplicity that makes it so fascinating.

The film is interesting in that it splits up the narrative. You start off with the couple and the disappearance, but then instead of just continuing on with a linear narrative of what happens to Rex, the film jumps around with intermittent flashbacks of the killer, Raymond Lemorne, as he plots and prepares for the kidnapping of a random woman.

While the character of Rex is relatable (and Saskia appropriately sympathetic and lovable), it is Raymond who is the more engaging character. Lemorne isn’t just some lonely drifter, he’s a chemistry teacher with a wife and two daughters. Watching him slip between doting family man in one scene and scheming would-be-killer in the next is both intriguing and unsettling. 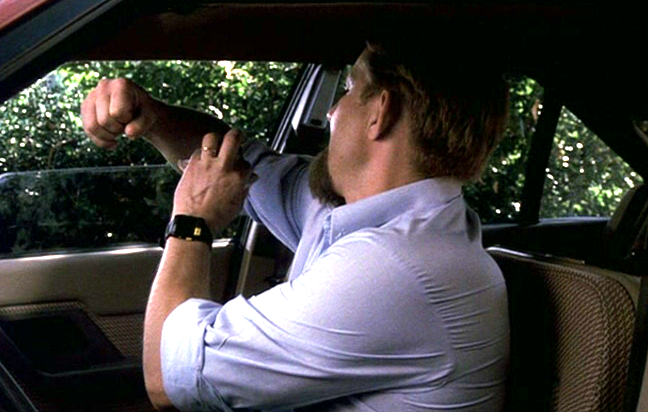 There’s really only one way to practice the whole chloroform plan without giving yourself away.

The man treats everything in a very matter of fact manner. Even when he meets up with Rex. This attitude makes him infuriating to Rex and the viewer. The man is a careful planner, yet every line seems to be constructed as if to see how far he can push the other man. The difference between the careful planning the the seemingly spontaneous jabs, seem to be, based on the flashbacks, part of his personality as a whole. He must plan things out, but at the same time it’s those random bursts of spontaneity and risk that give him the rush that he craves. 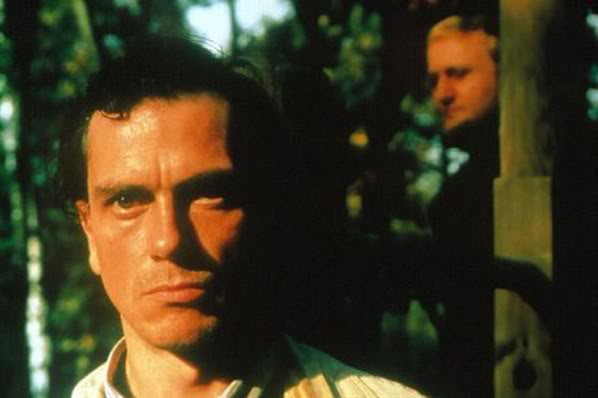 Lets see how far I can push him before I totally piss him off.

As you can imagine, since this film is about a Dutch couple and a French man, there’s quite a bit of reading to do. Yes indeed. Lots of subtitles. Usually this doesn’t bother me, and for the most part this film didn’t bother me either, but there is one thing that I feel needs to be addressed. Now, I don’t speak a lick of French or Dutch, so I can’t comment on the quality of the translation (other than I didn’t notice any spelling errors in the subtitles), but, to be clear, I’m not sure if Rex and Saskia are married or not. In one instance the translation said “girlfriend”, in another it said “wife” and that was just when Rex was involved. So I’m not sure which it is. All I know was that it switched around while I was watching it. It’s a minor complaint, I know, but all the same I found it a bit distracting. Other than that, I had no issue.

As far as cinematography goes, The Vanishing sports some very impressive shots. Some of them symbolic and related to the plot: 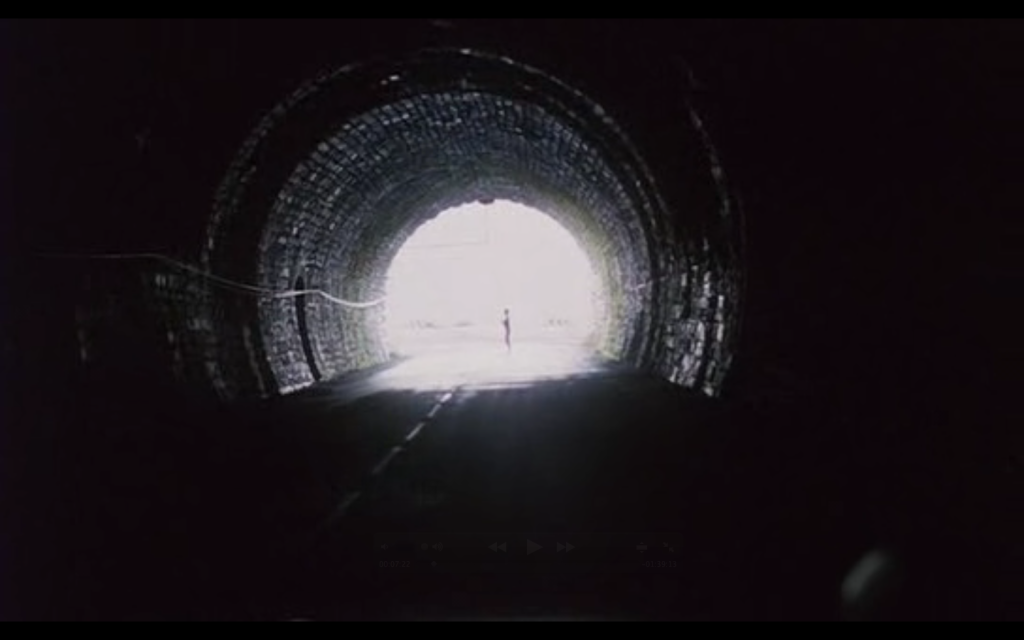 A dark tunnel with a light and a silhouetted figure at the end. What could it mean?

While others take advantage of some beautiful colors: 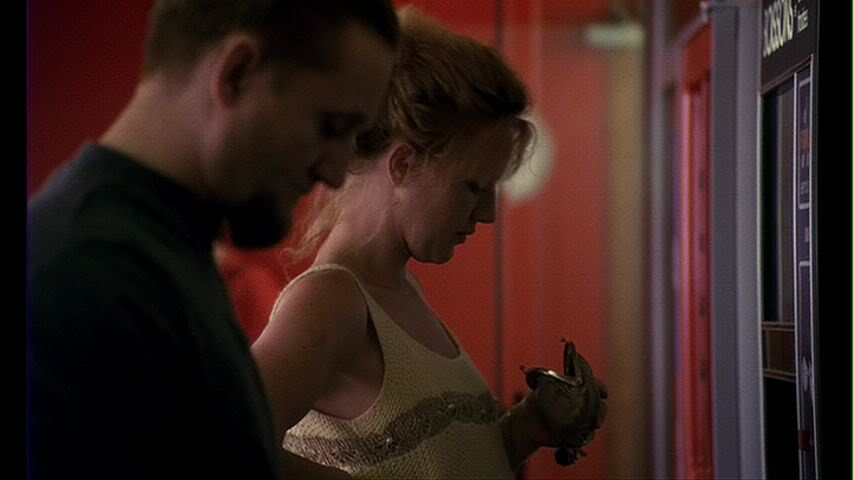 I admit it. I’m a sucker for that shade of red.

Released in 1988, the film is an adaptation of the novella The Golden Egg by Tim Krabbé. I have not read the book myself, but from what I’ve read it is a very good adaptation with few changes. The movie is probably best known for it’s ending, which the viewer will almost anticipate, yet be surprised at by the same time (assuming they haven’t been spoiled already). It made the list of 100 Scariest Movie Moments, so trust me, it’s a good one.

The film itself received excellent reviews, but was denied a nod for Best Foreign Language Film for the Dutch because it was determined to have too much French dialogue (Well that sucks). Johanna ter Steege did win a European Film Award for her portrayal of Saskia, though. Something I believe was rightfully deserved, for though her time on screen was short, she shined in every scene she was in.

The film was remade in English by the original director, George Sluizer. So if you thought this plot sounded familiar but don’t remember any subtitles, that’s why. If it doesn’t sound familiar, that’s because the remake was pretty much universally dismissed as far inferior to the original, mostly for it’s desire to change themes and, more importantly, the original ending. It does have Sandra Bullock in it though, so there is that.

The Vanishing is a thriller that surprises in many ways. As the film progresses it seems to tell you everything you need to know while it simultaneously still manages to build suspense. It hints about the outcome from the very beginning, yet still manages to shock you by the end. For thriller fans, it’s a film not to be missed. But if you don’t like subtitles you’re not going to be happy unless you can speak both Dutch and French.

The Vanishing is currently available to rent on Amazon.

It has also been released on DVD and Bluray by the Criterion Collection.