AKA Night of the Demon 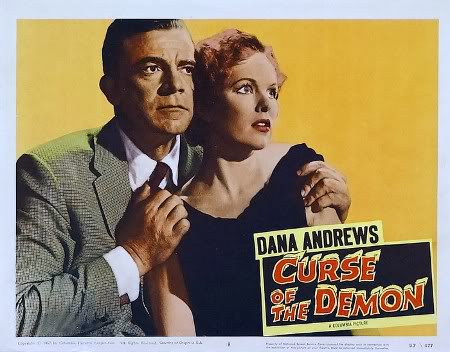 Yet another wonderful story gifted to me by the good folks at TCM.

This little gem tells the story of Dr. John Holden, an expert on hypnotism and superstition. Holden flies to England to attend a symposium on the supernatural and plans to participate in an investigation of a mysterious devil-worshiping cult and their eccentric leader, Julian Karswell. But when Holden arrives he finds out that one of his colleagues, Professor Harrington, has died under mysterious circumstances. Karswell appears to Holden

and asks/warns him not to proceed with his investigation, but Holden staunchly refuses and laughs it off. Holden’s skepticism is then challenged by Joanna Harrington, the late Professor Harrington’s niece, who believes her uncle was killed by something supernatural, somehow related with Karswell’s cult. The two team up to find out the truth.

For most of the film Holden refuses to admit the existence of the supernatural, but finds it increasingly difficult to explain the strange events happening around them. He starts to feel chilled when the weather is hot, sees visions of living smoke,

He becomes even more concerned when he finds a scrap of paper with runic symbols slipped in amongst his briefcase. Holden and Joanna discover that Professor Harrington received a similar paper three days before he died. With the help of Karswell’s concerned mother, the two find evidence to suggest that Holden too, is doomed to die in three days, unless he can find out the secret of the runes before it’s too late.

Curse of the Demon is a classic clash of science vs. superstition. In a bit of a surprise, the movie opens by actually showing you the reality of the supernatural threat, the demon itself. 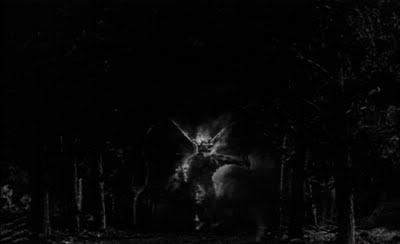 Now, the director of the film, Jacques Tourneur, originally intended for this to be as much as you would see as the creature. The creatures’ full appearance was latter added by producer Hal E. Chester. I personally have mixed feelings about this. On one hand it plays into that Hichcockian “bomb theory”, where it’s more suspenseful to know something that the characters on screen don’t. But on the other hand when you actually see the creature, it sort of stands out like a sore thumb when compared to the subtle tones of everything else that’s going on. And in fact, when you do first see the creature up close, it almost takes away from the film, like it doesn’t quite fit in.

But I must admit, that is a fabulous looking demon.

But in the scheme of things, I feel that’s really a minor point.

This is a very suggestive film, harkening back to Tourneur’s earlier Cat People. The use of light and shadow and the production design of the film is exquisite 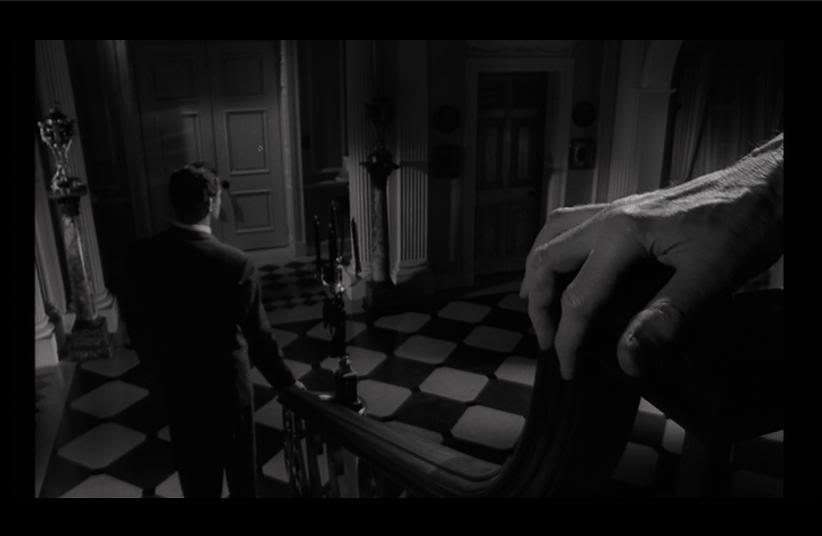 and the barren country-sides reflect the fear and paranoia that slowly begins to invade the protagonists.

And John Holden is so stubborn and so smug and self-assured, that the viewer’s sympathy often shifts away from him to the side characters. As the guest host on TCM said before the movie started, Holden is so stubborn and in denial about what’s going on that you’ll want to strangle him before the demon gets a chance too. Karswell, by contrast, is often much more sympathetic. He threatens, but makes jokes. He’s fond of children and takes care of his mother. Yet, at the same time he spends his free time summoning demons. He’s someone who must constantly find new victims or else become one himself. “My followers who pay for this do it out of fear. And I do what I do out of fear also. It’s part of the price.”

It’s easy to see why Curse of the Demon is considered a cult classic. It’s well crafted, well shot and filled with complex, interesting characters. It’s biggest downside, of course, is the inclusion of the menacing-looking demon. Fabulous design aside, it does end up taking away a large chunk of suspense the rest of the film works so tirelessly to craft. On the other hand, the film is so well put together that while it is a bit of a detriment, it’s not so big of one to ruin one’s enjoyment of the rest of the film.

Curse of the Demon is currently available for streaming on Amazon.

It’s also recently received a DVD release and a couple of Bluray releases from the UK and Spain, but I’m told they’re playable on US players.