I’m pretty sure there’s not an official DVD. I just liked this
cover better than the one for the VHS.

And One, and Two, and Three, and JAZZ HANDS!

Yes, Heavenly Bodies is sort of like a really long workout video with a plot. To say the least, I was a little irked. But hey, it was an 80’s movie. And I love me my 80’s movies, so I figured what the hell. It’s not like there was anything else on at the time anyway.

Heavenly Bodies is the story of three young women (though it really just focuses on one) who were tired of their boring, dead-end jobs. So they decide to shake things up a bit and found their own aerobics studio in an old converted warehouse space that they gussied up. They quickly become quite popular, with one of the girls, Samantha (Cynthia Dale from Moonstruck and My Bloody Valentine), even getting a local TV gig.

All right, smart-asses. Quit zooming the camera in on their boobs.

Samantha also starts up a romance with a aerobics-luvin’ footballer who wanders into their gym one day. He’s a little bit cocky at first, but is quickly shown the error of his ways.

Get up you pathetic girly man!

Business at the gym is booming. All is going well. But of course, this is an 80’s movie, so inevitably a competing gym gets all pissy about the ladies new popularity. Backstabbing is attempted and sleazy deals are made, all in their effort to crush the competition. This, of course, culminates in the most typically cliched ending of all 80’s movies: the Climactic Ending Competition. In the case of Heavenly Bodies, it takes place as a ‘Dance Till You Drop’ aerobics marathon.

I take it back. Screw the gym. 9 hours is long enough.

Yeah. This was obviously a movie trying to cash in on the 80’s aerobics craze and the whole thing has enough typical 80’s cheese to fill a small deli. The plot comes off as incredibly corny and the acting is often ‘meh’ (though some of you will probably see a couple familiar faces). Of course, being an 80’s movie also means it has an 80’s soundtrack, the whole thing being fun, catchy and appropriately upbeat. I personally liked it. However, as with other movies like this, the same few songs are often repeated….over and over and over. If you like the songs then it won’t be a problem, but if you don’t like them then your eye may start to develop a small tic.

Another thing that was nice about this film was the choreography. This being a film about an aerobics gym, one would expect in-sync movement and from what I could tell all of it looked pretty spot on, especially for a lower-budget film. But I gotta say, that some of the best stuff was when Samantha was by herself. 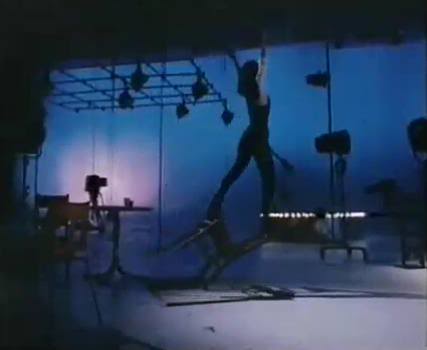 Or if not her, than at least her stunt/body double.

Coincidentally, those were also the scenes that were more artistically shot, something that seemed to be lacking in the rest of the movie (Really not all that surprising). 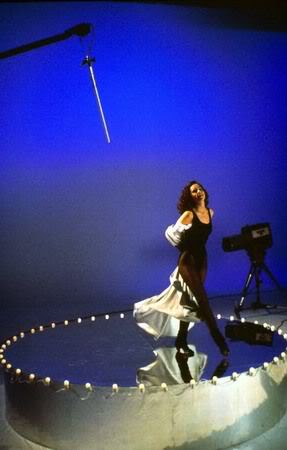 Or maybe it’s not artistic and it’s just my
love for silver and blue talking.

The film is rated ‘R’, something I found a little surprising considering the cheesiness and  subject matter. There’s some mild swearing and a vague, uncomfortable sex scene, but much of it felt forced and was pretty tame.

My guess is this is what really tipped the rating over:

Edited for your safety and frustration.

All in all, Heavenly Bodies is not too bad of a movie. It’s not fantastic, but it’s also not as horrid as my small description gives it credit for. It’s certainly not a competitor to Flashdance, but it’s a fun little gem in it’s own right. If you don’t mind all the aerobics (or you really, really like those tight leotards…..for some reason) than this is probably worth a quick viewing. If you can’t stand 80’s movies or anything that resembles dancing in general then you won’t find what you’re looking for here.

Of course, if you don’t want to watch it than that may not be too big a problem. Short of occasionally popping back up on TCM, I haven’t found it anywhere else. As far as I can tell, it’s not streaming on any official platforms and the movie hasn’t received an official release over here in the states since the days of VHS. But if anyone knows any differently, do let me know.