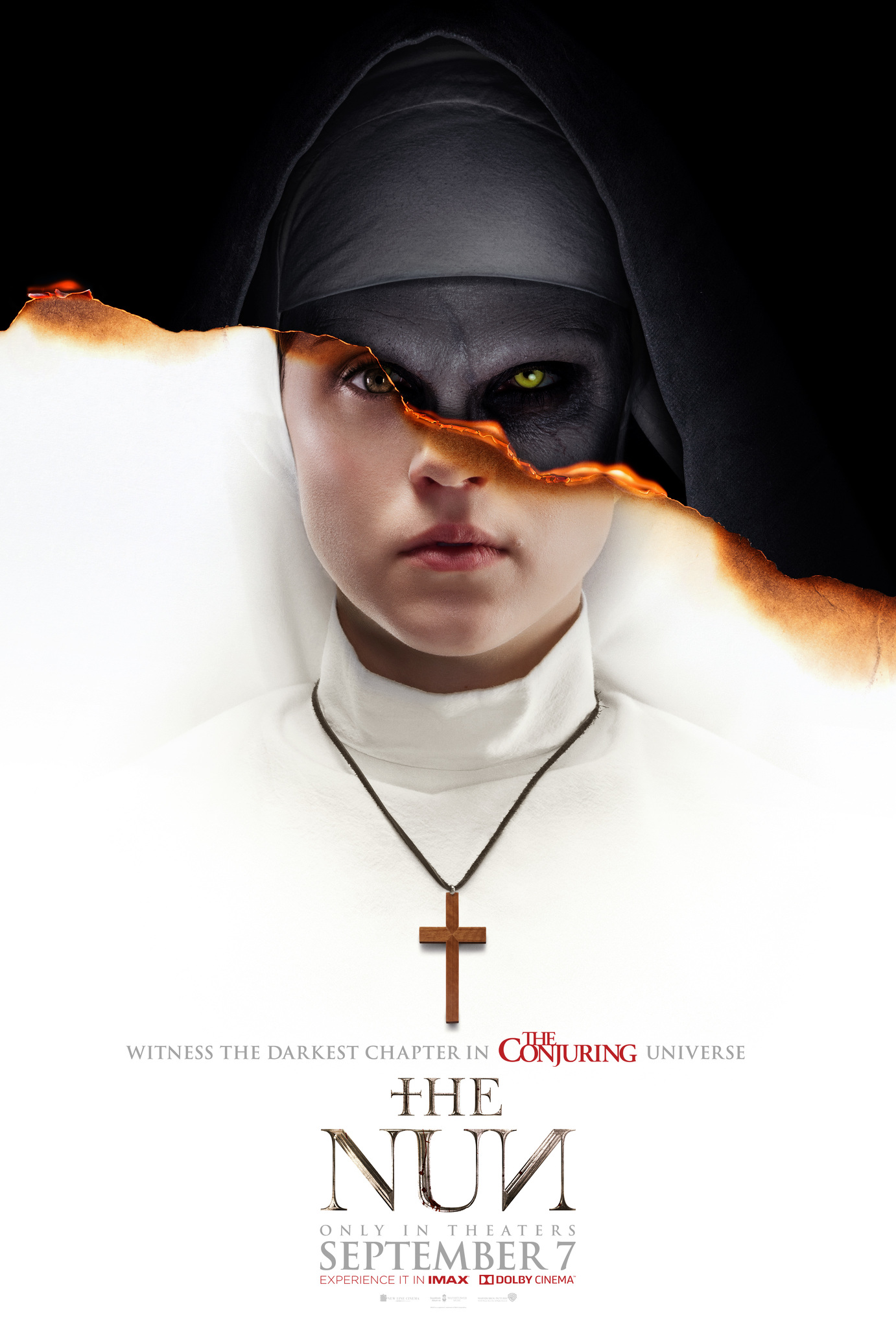 In 1952, the Vatican is informed of a great tragedy. At the remote Saint Cartha’s monastery in Romania, a nun has been found hanging near the front door. When they are unable to contact anyone inside, the Vatican decides to send some investigators to the monastery to discern what is going on. They choose as their emissaries, Father Burke, their go-to man for dealing with the strange and unusual, and Sister Irene, a novitiate just on the verge of taking her vows. When they arrive in the nearby village, they ask the man who found the nun to escort them to Saint Cartha’s. But when they arrive, things seem more dire than they anticipated. The remaining nuns seem terrified and unwilling to speak to them, and a foreboding evil presence seems to be permeating not only Saint Cartha’s, but also seeping into the nearby grounds, including the surrounding woods and village. When Father Burke is accosted in the middle of the night and buried by an unknown entity, the two investigators discover some hidden literature about the castle and discern that they are dealing with a very powerful demon. It now falls to the two of them to figure out a way to send the demon back through the gate it crawled out of, and close the gate so that nothing worse follows it through.

The Nun is a 2018 supernatural gothic horror film, and is actually the 5th installment in the ongoing Conjuring Universe series, which A) I didn’t realize going in, and B) isn’t something I ever thought I’d say when the first movie came out (which isn’t to say that the first movie is bad. I actually liked it quite a bit). The movie follows the origin story of The Nun, AKA the demon Valak, the antagonist shown in The Conjuring 2. Bonnie Aarons, who played The Nun, reprises her role for this prequel. Vera Farmiga and Patrick Wilson show up as well, but because this is canonically the first film in the ‘series’, they’re only briefly seen in some flashback scenes. So this film isn’t so much a continuation as it is a side story that helps connect some of the other film’s in the series together. But despite managing to be the highest grossing film of the franchise to date, it also holds the distinction of being the lowest rated, and if you watch it it won’t take you too long to figure out why.

The Nun’s biggest flaw is it’s story, because while one of its purposes seems to be to help tie together elements related to the two Conjuring films, of which it does a semi-decent job, the filmmakers didn’t seem to bother to do the same thing within the movie’s own plot. Considering how well put together the stories in the main Conjuring films seem to be, this feels like this was developed as little more than a quick cash grab. The story just does not get developed to the degree that it needed to, and as a result all the crucial aspects of a good ghost story, like the history and mystique, just end up getting glossed over or forgotten. The first and second Act feel more like horror movie filler than they do a coherent story, until the ending rolls around and you finally get to the good part. It almost feels like the filmmakers only had Act 3 planned out, didn’t know what to do with the rest, panicked, and filled it with ghost story cliches so that they could fill some time. So expect to put up with a lot of creepy noises, people wandering in the dark and jump scares. But what makes it all really frustrating is that there are hints at some good story elements and lore peppered throughout the whole movie, so all the dull plodding really wasn’t necessary. But the film doesn’t ever bother to actually focus on any of those story elements to anyone’s satisfaction. It just quickly drops them at your feet and lets them sit there before rushing off to the next dull scene in a series of dull scenes. It’s mildly infuriating.

And that’s not even taking into account some of the gaping plot holes the writers left for you to rage over. Small errors abound in this film, and history majors in particular are likely to walk away from this one feeling, at best, mildly irked. Small things like Catholicism being under persecution in Romania around the time period the film took place makes one question if there was any reasoning behind the film’s setting beyond “Romania is where all the creepy things come from, right?”. Or having the monastery bombed by a German plane, as opposed to an Allied plane since Romania was allied with the Axis powers, shows that the writers didn’t bother to look up even the most basic of historical facts.

But while annoying, things like that are only likely to give World War II history buffs a small stroke. The film also has bigger plot-related issues. The worst for me being related to how the main characters were supposed to go about banishing the demon and closing the Hell Portal. You see, the film tells us two things about St. Cartha’s. The first is that the Sisters of St. Cartha’s are in a state of perpetual adoration which, if you don’t know, means that there is always someone praying to God at all hours. When one person stops, another takes over and this has been going on for centuries. It’s suggested that this was started because the Church knows there’s a Hell Portal on the premises, and that even though the portal was closed, this is sort of a countermeasure to help keep the castle holy. Because as long as the Sister’s keep praying, God is supposed to be present. The second, is that the Hell portal was initially closed by the Church with a sacred holy relic, in this case, the blood of Christ. To get to this relic, you need a key, a key which has been shown to us and the main characters since the beginning of the movie. The main characters get the key from the dead nun. It wasn’t hidden. The nuns always had the key. And we’re told that the nuns were always praying, which should mean that God was present and the demon couldn’t show themselves to them. So what confuses and befuddles me, and makes my eye start to twitch, is this: If the nuns of St. Cartha’s knew that the portal was reopened, and they knew there was a demon loose, and they knew where the holy relic was and had the key to access said relic, WHY THE BLOODY HELL DIDN’T THEY GO DOWN AND CLOSE THE FRAGGING PORTAL THEMSELVES! We’re told that the portal had accidentally been reopened during the war, but the war had been over for seven years at this point! SEVEN! Are you telling me that all the nuns in that cloister let this evil thing just wander around the castle and torment them for SEVEN YEARS, minimum, before getting proactive and only trying to stop it within the last week? No one thought to send a letter to the Vatican asking for assistance? Nothing? Are you kidding me? WTH, movie? I have so many questions regarding that one instance, but I suspect that any answer I’m given is only going to annoy me further, because the more I think about it the more it ticks me off.

Seriously, WTF have you all been doing?

But anyway — OTHER THAN THAT — the movie isn’t half bad. The visuals, at the very least, manage to hold up with the rest of the series. This is a very pretty film. Unlike the story, you can tell that thought went into all the imagery. Scenes are carefully composed to be as artistically appealing as possible. Color, light and shadow, and atmosphere are all used expertly. Even the freakin’ camerawork here is exquisite. It’s just a shame that the same careful attention to detail wasn’t put into the story.

The acting also ends up faring better than the film’s story, but considering how crappy that is, that shouldn’t have been too hard. Demián Bichir and Taissa Farmiga, younger sister of Vera Farmiga, put in admirable performances as Father Burke and Sister Irine, who come across as earnest and believable. But on the other end of the spectrum is “Frenchie”, the farmer who aids them in part of their journey. Frenchie is meant to be a sort of comic relief character, but mostly his attempts at humor just come across as ill-timed or out of place. James Wan had a hand in this script, and if this is part of his doing then may I humbly suggest he shy away from trying his hand at a comedy routine.

I wanted to like The Nun once I realized what it actually was and the history behind it. But while it had a strong start and a good ending, the entire middle part was just a long, dull draaaaag. The story is filled with tropes and jump scares, the demon isn’t nearly as menacing as it should be, and it’s obvious that no one really spent time ironing out the plot. But on the bright side, the acting is decent and the visuals can be absolutely stunning. If you’re a fan of the Conjuring series then you might want to check this out just to have some background lore. But to everyone else watching this movie is likely going to feel like it’s far too predictable.

The Nun is available on a variety of streaming services.

The Nun is also available on DVD and Bluray.