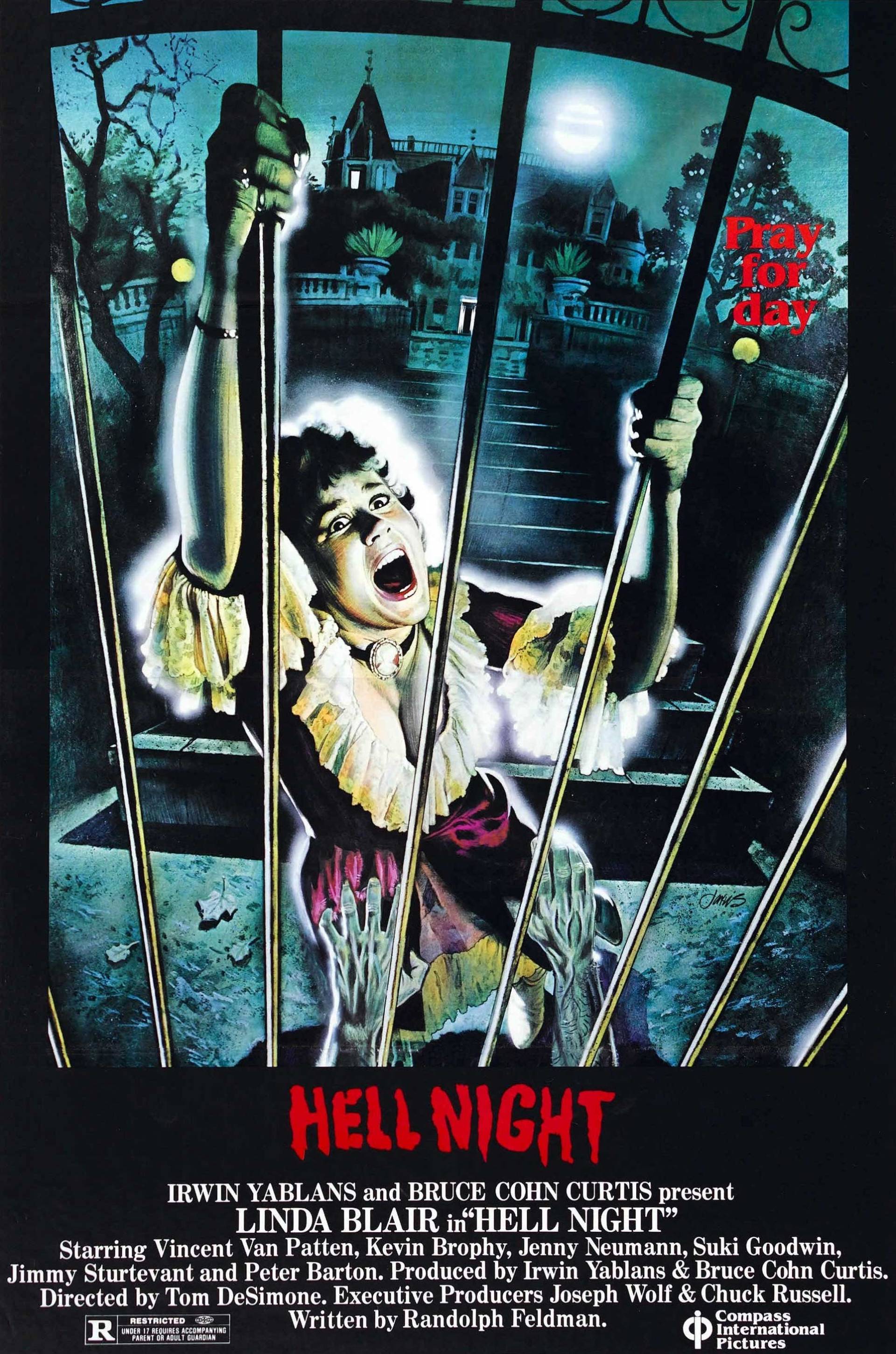 In order to get into the Alpha Sigma Rho sorority or fraternity, it is required that all pledges must spend the final night of Hell Week in Garth Manor, a remote and abandoned estate that has become notorious because twelve years ago its previous owner slaughtered his entire family there before hanging himself. Or at least, that’s how the story goes. Legend has it that Garth’s youngest son survived and is still hiding out somewhere on the estate. Nobody really believes the tall tales, but Marti, Seth, Jeff and Denise have about six hours to find out if the local legends are true or not. Assuming any of them survive the night, that is.

Hell Night from 1981 is one of the many early slashers to pop up thanks to the popularity of Halloween from three years earlier. Though parts of the film were actually influenced by another one of Jamie Lee Curtis’ slasher flicks, Terror Train, which had released just a year prior. The film follows many of the familiar slasher protocols: You’ve got a group of kids trapped in a creepy, desolate location, with no way to contact the outside world, and a murderous loon is slowly stalking and killing them, but they’re not really aware of that until they’re a good half-way into the movie. Sound familiar? Yeah, it’s pretty much your standard slasher plotline. That said, the movie still ends up being pretty fun, even though most seasoned horror fans will be able to figure out each plot beat the whole way through.

Standing and forlornly looking out the window? Check!

While the plot itself is of course nothing to write home about, it still ends up being rather effective. You’ve got four kids stuck in a remote house. Blair and her male companion qualify as your “everyman” characters who try to stay calm and level-headed as they try to figure out what’s going on, and their two counterparts are your typical horny-toads who miraculously manage to stay in their underwear, and are too busy trying to drink and sex each other up to really care what’s happening around them. Meanwhile, you’ve got the head of the sorority and fraternity outside with their own personal tech-guy, trying to set-up a bunch of ghost pranks to play on the pledges within. The pledges are smart enough to figure out what’s going on almost immediately and dismantle most of the sound equipment. But sadly they are not smart enough to realize that the subsequent screams they hear from outside are their housemates slowly getting butchered, until the killer finally gives up hope of them ever discovering him on their own and literally drops a severed head in one of their beds to help move the plot along. Up until this point, the pacing of the film moves at a surprisingly good clip, but this is the spot where the movie’s forward momentum stalls and the viewer is forced to watch two extended ‘let’s wander around in the dark’ scenes, and then an equally long chase scene. Blurg. And it had been doing so well, too. Thankfully though, the pacing picks up again with the final act, so we’re not left to wallow through any more painfully slow wandering sequences. So other than that one small hiccup, the movie really doesn’t have too much annoying filler.

Unfortunately, one of the things we do have to suffer though are a myriad of inconsistencies and plot holes that start pretty much from the beginning. The film’s ending completely contradicts its own earlier explanation of who died and who lived after the murders at Garth Manor. It then continues to contradict itself when it tells us that the home has no modern conveniences like electricity or running water. Yet a couple of scenes later the kids outside are seen setting up electrical equipment and running it through the house, and later, one of the characters flushes a toilet, clearly indicating that there is, indeed, indoor plumbing. The home is also supposed to be abandoned, yet when everyone walks through the front door all the candles in the hall are lit, as if some firebug got excited and mistook the place for a Yankee Candle Company. But the one that ended up bothering me the most is the “ghost” that Linda Blair’s character sees in the parlor. The movie tries to suggest that the kids outside are somehow pulling this off, but to create an illusion like that in 1981 would require either a very high-tech projector, or a series of glass pieces and mirrors that would have to be so large to pull off something like the Pepper’s Ghost Illusion that there would be no conceivable way to hide them. I mean, Linda and company would have literally had to walk right smack-dab through a pane of glass or two just to make it across the room if they were there. So that suggests to me that she saw an actual damn ghost, because that’s the one “prank” the movie doesn’t bother to try to explain away with pre-placed sound equipment or mechanical switches. Yet if it was a ghost, it’s never seen again and sort of fades into obscurity, which makes me wonder: What was even the point of having it in the first place? To show off what the effects team could do with only a 1 million dollar budget? 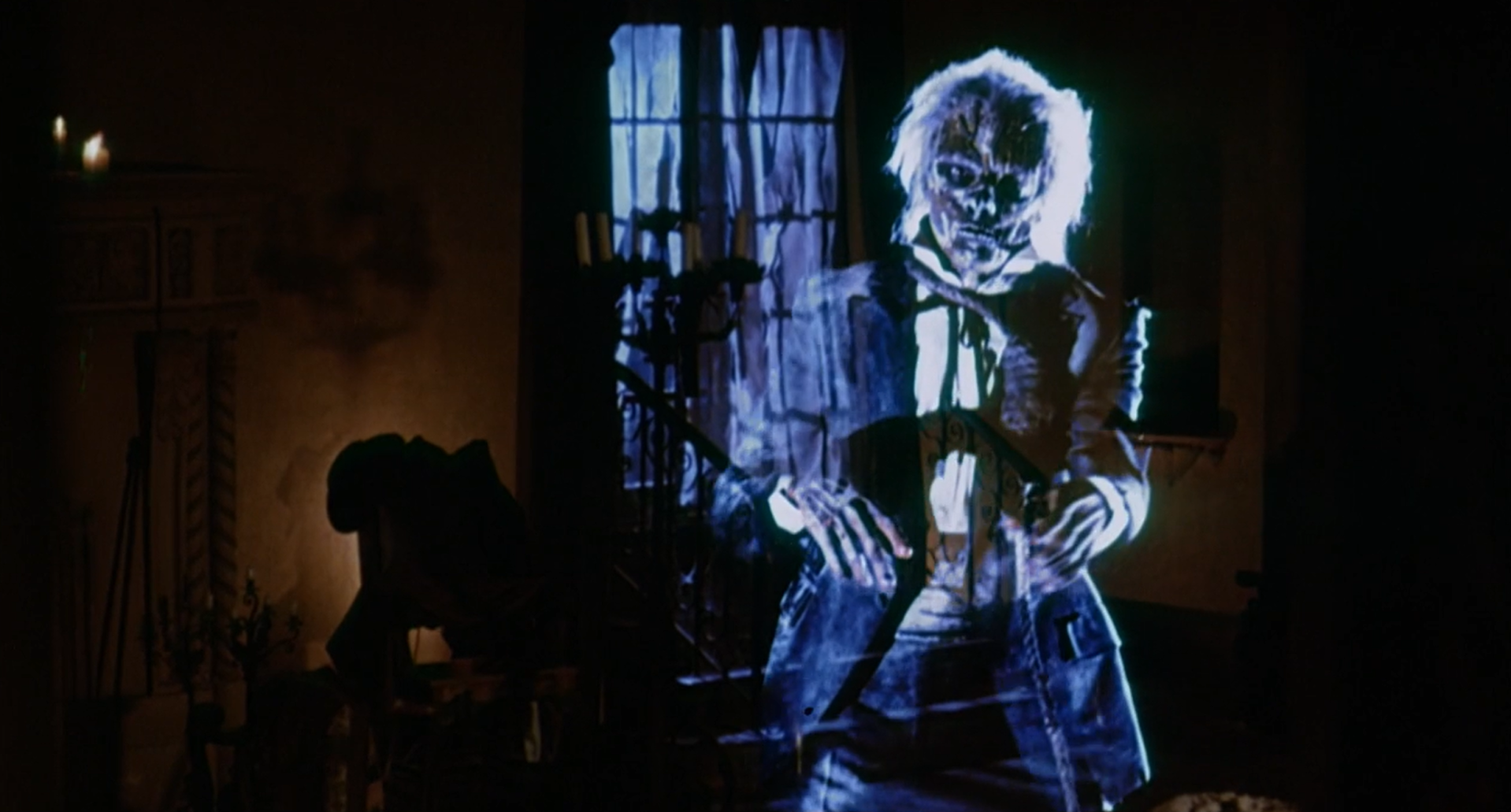 One of the things that helps make the film stand out a bit from other slashers of the time, is that director Tom De Simone didn’t like the visual of people walking around haunted houses in modern clothing. So the filmmakers decided to make the final night of Hell Week a costume party, just so they had an excuse to make all the male leads wear excessively poofy shirts and they could shove lead Linda Blair into a gothic dress. You know, for the authenticity of walking around the haunted house decor. So a lot of the film has a very pleasing, effective and distinct Victorian-esque aesthetic. Of course, the illusion ends up kind of broken whenever the characters are seen driving around in automobiles, and roaming around a house with flashlights. But for the most part it’s a very attractive production, even if some of the visuals and plot continuity tend to contradict each other at times.

I was surprised how much I enjoyed Hell Night. It’s rather bloodless, kinda lacks in scares, and is not in any way a unique production. In fact, a lot of it feels very familiar. But maybe that’s why I liked it. It feels like horror movie comfort food. The scenarios might be familiar, but the visuals are pleasant, the characters aren’t annoying, and while it doesn’t have a lot of tension, it does manage to maintain a rather creepy atmosphere throughout its whole run. So in the end, while it’s familiar, it’s also kinda fun, which is really all I ask for in these slightly cheesy horror movies. It’s not perfect, but I can see why it developed such a cult following over the years. So if you’re looking for some light, quick horror flair, Hell Night could be a solid option.

Hell Night is available on a variety of streaming services.

Hell Night is also available on DVD and Bluray.