Social worker Li Shu-fen has just discovered that her teenage daughter Ya-ting is pregnant, and is none too happy about it. Not long after she takes her to a clinic to see what their options are, Ya-ting mysteriously goes missing. The only clue to her disappearance is some surveillance footage of the teen walking away accompanied by what looks to be a little girl in a red dress. This not being the first time this phenomena has happened, the local police quickly form a search party and head up into the mountains with Shu-fen to look for the wayward teen. But after coming up empty handed in the long search for her daughter, Shu-fen instead finds a very pregnant and disoriented Yi-chun, who still seems to be looking for her boyfriend, Wei. Distressed and angry at the trick the demon has continued to play on her, Yi-chun joins Shu-fen and Ya-ting’s boyfriend in the search for the Ya-ting, in the hopes that they can find the teen and solve the mystery of The Little Girl In Red and stop the malicious demon once and for all.

Oh, goodie. They made a sequel. Though, I guess saying ‘goodie’ is a bit disingenuous, because that would imply that a sequel was both “in demand” and/or that it somehow added or improved upon the original. But The Tag-Along 2 does neither of those things, so that’s kind of a bummer. The film does make an attempt to add a bit more background information to The Little Girl In Red mythos, but any fun additions the movie added to the story were quickly sapped up by the plotting, effects, and unnecessarily long run time.

One thing the movie has in its favor is the backstory and the real-world connectivity it adds to the Little Girl urban legend. The movie inserts clips from the original video recording that spawned the legend, and then goes so far as to explain who the little girl is, who her family is, and how she came to be turned into a demon.

But that’s where all the goodwill regarding the backstory ends and the plot problems begin. Because while the filmmakers went to the trouble of giving the little girl a backstory, they seem to have forgotten that when you go to the trouble of giving your villain a past, it all starts to fall apart if you don’t also give them the critical aspect of motivation. Because if you’re going to try to humanize them, knowing the ‘why’ is sort of a critical part of the process, and sadly, the filmmakers don’t seem to have ever gotten around to that part. They do start to give her a motive, that being revenge on her family for her perception of being maliciously turned into a demon, but that doesn’t even come close to explaining all her actions. Getting revenge on certain people is fine and dandy, but it doesn’t involve kidnapping randos and dragging them into the woods. It’s not like they were strategically chosen to flush her family out of hiding. The movie makes it clear that she already knew exactly where they were. So what was the point? No idea. Because while the movie explained some things, by not explaining others you end up walking away with more questions than you started with, which sort of defeats the purpose.

But that isn’t the film’s only plot related issue. The other is that the movie just runs excessively long for the story it’s trying to tell, and much of that could have been solved by cutting a lot of superfluous plot points. For instance, one of the ways the movie connects to the first film is by bringing back the first film’s protagonist, Yi-chun. Now, I like Yi-chun, don’t get me wrong, but her inclusion ends up being more of a hindrance than a help. For starters, and this is a personal pet-peeve of mine, bringing her back in the state they did means that the whole last half-hour of the first film was a complete fabrication, and I HATE IT when filmmakers do that just to make their sequel work. But the second, and most important part, is that including her in this film was just 100% completely unnecessary. She spends most of her time in either a slightly frantic or catatonic state, making her completely useless to the other characters. And then the one thing she could have actually added, the backstory regarding all the events that transpired in the first film, was conveyed to the other characters (and the audience) not by her, but by Shu-fen’s colleague, another social worker and a completely separate third party. Meaning Yi-chun’s entire inclusion is pointless. They could have had the social worker friend fill in for the couple of moments where she was actually needed, and the film would have not only been mercifully shorter, but it would have also lost nothing. And those are just the moments involving ONE character. The movie is littered with similar situations involving other characters, and by just chopping a couple of them out the film could have cut out a good 20 minutes and made it’s runtime feel much more manageable and less awkward.

And that’s not even getting into the weirdness of the boyfriend who frequently gets possessed by a deity known as Master Tiger. Master Tiger is actually a well regarded spirit in Taiwan, with temples dedicated to the god in Changhua, Waipu, and Shiding. But culturally significant though the god may be, it’s still weird as heck watching a teenager with frosted-tipped hair snarl and crawl around on the ground on all fours, sniffing and scratching at things like he was some sort of dog (or in this case, tiger). At first I thought I was being culturally insensitive, but when even Shu-fen looked at the kid like he’d lost his freakin’ marbles I realized that, no, it wasn’t just me, and felt a smidgen better about myself.

Like the previous film, this movie is also highly atmospheric from beginning to end, and the cinematography is still excellent, on par if not better than the first film. So, for the most part, the visuals remain mostly solid. Or, at least they are right up until the ghosts show up, because that’s when all the CGI comes out to play and it’s…well, calling it “not good” would be too nice, because most of it looks downright hokey. For a movie that otherwise does so well with the visuals, most of the computer graphics look horribly out of place, often looking like they don’t even fit in the setting, unless there’s something to obscure their flaws, like a convenient dense cloud of fog. It’s really a shame, because the designs of the various creatures actually aren’t all that bad. It’s just that the shading is off, so they often look like the cheap overlays they are. Except for Master Tiger. That thing looks out of place no matter what setting it’s in.

The final knock against it is that the movie just feels too damn preachy. I thought the filmmakers weren’t subtle in the first film, but in this one they seem to go out of their way to shove their views of morality in their viewers’ faces. And they didn’t even bother to change the theme, either. They’re still hung up on abortion and making the person seeking it out seem like a bad person, when it’s clearly a perfectly legal practice in their country. The film doesn’t seem to care that Shu-fen’s concerns about her young teenage daughter being pregnant are perfectly valid. They seem to want to make her out to be some sort of hypocrite, when she herself had her daughter at a young age. But that viewpoint makes the filmmakers look even worse when they reveal that Shu-fen’s daughter wasn’t conceived by a consensual act. Do they try to illustrate how the two situations are different? Hell no. They try to wave off a rape that resulted in a child by saying that it was meant to be because the child chose Shu-fen to be her mother. Does any of this in any way tie into the demon child stealing away humans and killing them? Absolutely not. Which means they added it in and focused on it just to make a point. If this film were made in the West, this would be a favorite film of the religious right. But since it was made in Taiwan and doesn’t involve God, they probably couldn’t care less.

I was kinda hoping that The Tag-Along 2 would add some improvements upon the original, but that didn’t end up happening. The acting, color and framing are still on point, so artistically the film fares pretty well. The not-so-great CGI came back with a vengeance. It was okay in the last film when it was used sparingly, but they made things worse for this film when it ended up being utilized about 10x more than the original, which ended up inadvertently highlighting all their flaws. And as nice as it was to have the filmmakers try to give us some background information on the ghost, they ended up falling short and made things even more puzzling. With all the unanswered questions and unnecessary scenes, the film’s plot ends up being very disjointed, story-wise. So instead of being an improvement, this film feels about on par with the original. Still okay, but with some serious flaws. If you liked the first film or are a fan of ghost stories, then The Tag-Along 2 might be worth looking into. But if you want something a little more streamlined, then you may want to think twice.

The Tag-Along 2 is available on a variety of streaming services.

The Tag-Along 2 is also available on DVD and Bluray. 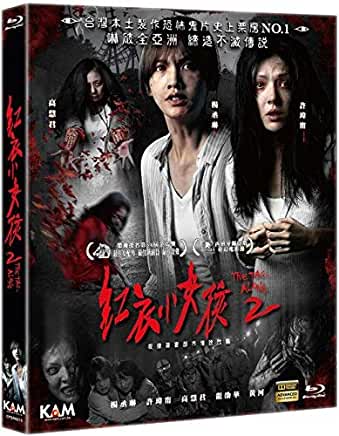