Doctor Robert Graves heads to an insane asylum to help keep score of a cricket match the inmates are having. While there he’s introduced to the other scorekeeper of the match, patient Charles Crossley. Graves has already been informed that Crossley is considered an odd duck among odd ducks, even for someone housed in an insane asylum. While watching the game, Crossley tells Graves about how he ended up in the asylum….

….having imposed himself on Anthony and Rachel Fielding, a young English couple who lived in an isolated home out in Devon. Crossley invades their lives under the guise of needing some food. But his tales of life with the Aboriginal people and his purported knowledge of some of their mystical ways intrigue husband Anthony Fielding, who convinces Crossley to demonstrate to him the “terror shout”, a skill that Crossley claims took 18 years to perfect and is said to be able to kill anyone who hears the sound unimpeded. But what started out as mere curiosity takes a turn for the sinister as Crossley’s mysterious motives slowly begin to reveal themselves.

The Shout is an English film from 1978, directed by Polish director Jerzy Skolimowski. It’s often billed as a horror film, but I think it may be better described as a very dark mystery/thriller. Boiled down to it’s base parts it tells the simple, but mysterious story, which may or may not be true, of a man, who may or may not be sane, and how he royally screwed with two people’s lives. This is a familiar theme in films, that of the stranger’s sudden appearance being the catalyst for change in the lives of those the stranger comes across, often ending with some sort of revelation or discovery of some deep, dark secret hidden under the veneer of contentment or normalcy held by the people the stranger comes across. But The Shout is also an art film so there are additional underlying themes of religion, betrayal and a little racism thrown in for good measure. But don’t let that scare you away, though. That just means it’s an adult film that can either be enjoyed by itself, or examined more closely for those who wish to delve deeper.

Spill to me your secrets, oh mysterious rock I rolled over onto….

What makes the story interesting and mysterious is the choice of the film’s narrator: Crossly himself. Before Crossly even begins telling the tale, he fully admits to altering the sequence of events or changing pieces of it “on a whim” simply because he wants to. So part of the film’s allure is that the audience has no idea what, if any, parts of the story are real or not. Was all of it fake? Was it real? Was it a mix? And if it was, which parts were real and which parts were fake? No indication is ever given, leaving the audience with a lot of unanswered questions that the viewer is meant to decipher for themselves. The result of the film’s unreliable narrator is a rather dreamlike quality that perfectly, though subtly, fits the supernatural themes present in the rest of the film.

So, are you going to tell me what’s going on here or noo….?

One of the nice benefits to art films (or at least most art films) is that they have a tendency to look nice. The Shout is no exception. While I’m not going to say it’s the prettiest thing I’ve ever seen, and in fact it’s nowhere close to that, the framing of the cinematography is excellent. Some film’s like to add beauty with high-contrast or intense splashes of color, but here the photography work is more subtle and elegant. There are of course splashes of color throughout, Devon is a lovely area after all, but most of the coloring seen here is more dull and muted, perhaps to highlight the rather simple lives of the Fieldings, living in their simple cottage in their simple town in the simple English countryside. Whatever the case may be, the excellent composition helps to add an extra layer  of visual sophistication to a film that already wasn’t lacking for styling points.

A movie like this really hinges on the performances of it’s actors to make the film believable, and thankfully everyone here pulls off their roles with apom. John Hurt is the perfect confused ‘everyman’, just trying to figure out what’s going on and how to get his life back. Susannah York pulls off a believable fly caught in a spider’s web. And even Tim Curry pops up in a rather small role as the befuddled Doctor Graves who patiently sits and listens to Crossly’s fantastical story. But this is, really, Crossly’s story, and Alan Bates truly nails it, dominating the screen from start to finish. Throughout the film his quiet eeriness slowly evolves from subtle creepiness to outright malicious intent, and his performance is truly a (disturbing) joy to watch. The one downside the film has is that, beyond the mystery of what is real or not, there are some elements of the movie that are just presented without ever being expounded upon. For instance, Crossly offhandedly mentions at one point in the beginning of the film that part of his soul has been destroyed, which caused him to lose his powers. We later find out that his soul was, apparently, located in a rock buried at the bottom of a hill out in the moors. The puzzling part is, we are also led to believe that the souls of everyone in town are also located in similar rocks, buried in the same location. How the rocks got there, or why Crossly’s Soul Rock was among them even though he never lived in the town, is never explained. Having had other mysteries explained to us, it almost feels like the explanation for this was lost in a cut scene somewhere, but I suppose we’ll never know. It’ll just remain one more mystery in an otherwise mysterious film.

Other unknown mystery? Why they decided to put the corpses on the DINING ROOM TABLES.

The Shout is the kind of movie that many would benefit from multiple viewings. The cast and visuals  are excellent, and on the surface it’s an easy enough to follow mystery/thriller with a supernatural bent. But if you dig deeper into the themes and allegories found here you can find a lot more interesting baggage to unpack, so those looking for more of a cerebral horror/mystery experience will likely find something to enjoy. Meanwhile, straight-up horror fans will appreciate the creepy and menacing atmosphere (the “shout” itself is actually very effective and quite disturbing), but may be disappointed by the lack of any type of outright scares or any amount of blood. This just isn’t that type of film. But if you’re the type who enjoys the more psychological horror/thriller/mystery type films, then this is really something you should track down. It’s quite excellent.

The Shout is available on a variety of streaming services.

It is also available on DVD and Bluray, though it won’t be playable in the US on non-region-free players. 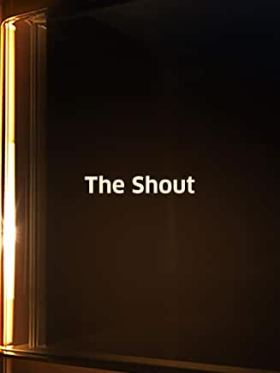 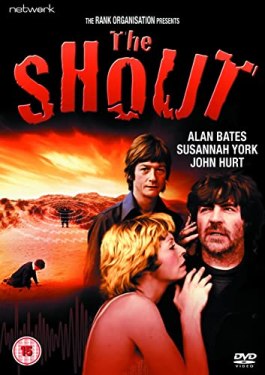