The movie start with a nameless drifter, referred to only as Nada. He goes to LA looking for work and manages to land a job at a construction site. Having nowhere to stay, one of his coworkers, Frank, takes him to the shantytown he’s staying at.

After watching him eat and sleep, we find out that Mr. Nameless is very nosey. After watching some odd behavior at the church across the street, Nada goes to investigate and finds that the church is a cover for…. Something. There are speakers’ set up to play music, meant to drown out the noise of whispers coming from another room. All Nada finds is pile upon pile of stacked cardboard boxes.

That night the police raid the church and the shantytown, almost plowing people down with construction equipment in their efforts to clear it out. Nada goes back to the cleared out church and manages to find one untouched box hidden away in a secret compartment. He opens it up and finds… Nothing but a box full of sunglasses. Deciding he’d like a souvenir from his horrible night he snags a pair and hides the rest away where he hopes they won’t be found, a trashcan (brilliant, dumbass) and takes to the streets.

Except the world he sees through the sunglasses looks completely different

Not true, I hear you pessimists say. The world looks like this on any given day. It’s just the glasses make it more honest.

Remove the glasses and the billboards and signs return to their bright and sunny pictures with colorful fonts. Put them back and *BAM!*, reality. It’s even written on the money.

Thank you, blank pieces of paper, but I already knew that.

Nada is understandably terrified, but he gets an even bigger shock when he sees certain people walk by.

What’s worse is the damned things are everywhere.

Nada is not a smart man.

After giving himself away (by essentially calling everyone an ugly freak), the icky people quickly send people after him. Nada fights them off and decides his only option is to take them all out. 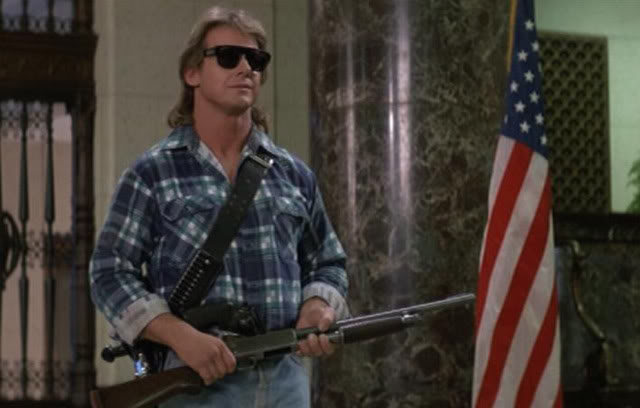 Even if he has to dress up like a hillbilly Blues Brother to do it.

Realizing he’s going to need some help he tries to enlist the help of his friend Frank, sparking one of the longest and most memorable one-on-one man fight scenes in cinema.

I’m not kidding. It’s long… But Awesome! WATCH IT!.

The two of them then set out to stop the evil (as it would turn out, blue) menace and save humanity.

You don’t screw with a heavily armed “Rowdy” Roddy Piper and Goliath. You. Just. Don’t.

At it’s heart, They Live is a horror/sci-fi film, but you’d have to be an idiot not to recognize all the political commentary pulsating beneath all the action and horror and one-liners.

What I found great was that while this film was made in the 80’s, it’s still relevant today. It echoes the same fears we have now about the economy, consumerism and the growing gap between the wealthy and middle and lower class. It may be fun and a little goofy, but at the same time the film’s saying something, and it’s meaning is just as important and relatable as it was when it was released.

As far as the acting goes, Keith David, as always, is excellent, and while Roddy Piper may not have been my first choice he certainly was far more competent than I would have initially given him credit for. He holds himself well in the role and I was pleasantly surprise. He’s not a great actor by any means, but he was decent as far as the acting went. Of course, where he really shined was in that aforementioned fight scene. Even if it’s the only part of the movie you watch (but really, you have no reason not too to see the whole thing ), than at least spare 6 minutes of your time for that. I mean, hell, if South Park decided it was good enough to base one of their most memorable fight scenes on, the least you could do is watch the original.

Overall, I really enjoyed They Live. I may not have liked it as much as Halloween or The Thing, but it’s definitely up there when it comes to my favorite films he’s done. It’s fun and funny, but it’s also got that undertone of commentary that manages to add to the film without coming off as preachy or taking away from any of the mindless enjoyment. But it also gives you a little extra to think about if you don’t mind the extra effort. So, if you like fun Horror or Sci-Fi romps or if you like Sci-Fi movies that have a little more substance, you’ll probably get a kick out of this.

They Live is currently available on a variety of streaming services.