AKA: Sasquatch: The Legend of Bigfoot
A group of scientists and local guides mount an expedition into the rarely traveled, rugged Canadian wilderness in search of the elusive creature known as Bigfoot. “Okay, so we’ll be there, and the Kraft Services food station will be set up over here….”

You know, you’re not fully aware of just how many Bigfoot movies there actually are until you try to do an image search for a singular poster. There are literally dozens of films related to the large, hairy beast in a variety of genres, ranging all the way from the family friendly fare of Harry and the Hendersons to documentary-style outings like The Legend of Boggy Creek. Sasquatch falls closer into the later category, by meshing together a bit of nature documentary and a little bit of horror to create a pseudo-documentary/horror outing that’s more heavy on history and narration, than it is on any type of horror.

Though really, the biggest horror is all the bad 70s facial hair.

First, I must give credit where credit is due. For a movie that was aiming to be like a documentary, it certainly does it’s best to feel like one. While it doesn’t go so far as to pretend there’s a guy with a camera following the expedition or have any of the characters give “interviews”, it does do a pretty good job of making you feel like you have an unimpeded third-person perspective of the events going on while everything is being narrated by one of the doctors on the expedition. So it’s almost like you’re watching a visualized diary. It also does a decent job with a couple narrated dramatizations of “historic” Sasquatch encounters, including the “Ape Canyon” incident and a story that former American President Theodore Roosevelt wrote about in his book The Wilderness Hunter, known as “The Bauman Incident”, although the latter was never explicitly attributed to a Bigfoot or Sasquatch. But what makes the film really feel like a documentary is all the beautiful footage of the landscape of the Pacific Northwest and the inclusion of numerous instances of natural wildlife. It’s actually pretty impressive that they managed to get all this footage of different animals, and that coupled with all the stunning scenery helps make it one of the prettier, low-budget, B-flicks I think I’ve seen. Of course, there’s also a couple instances of forced wildlife inclusion, including a barely visible ‘Grizzly attack’ that’s clearly the work of a trained black bear and a “Cougar attack” that looks to be a combination of found footage and the filmmakers throwing some mountain lions down a cliff to simulate an attack. That last instance feels particularly forced, as you can tell from the beginning that the poor cougar wants nothing to do with the nonsense they’re trying to force on it. The second the poor thing lands (in spectacular slow motion, no less) it immediately tries to scale back up the cliff as quickly as possible. An accompanying voiceover claims it’s trying to get at the horses, but the whole instance feels so staged, because the entire scene is just so staggeringly obvious and awkward. I guess bears are much easier to train than mountain lions.

If we make it dark enough and add some scary music do you think they’ll notice it’s a tiny black bear?

I can’t believe you guys just threw me off a cliff?! WTF!?!?

Unfortunately, the film spends a little too much time on the whole documentary style aspect and focuses so much on the characters, scenery and local wildlife that at times you can forget that this is actually supposed to be a story about, you know, bigfoot. They don’t really seem to singularly focus on bigfoot until the last half hour of the film. Up to that point the film ping-pong’s back and forth between the occasional stories of bigfoot and following the exploits of the various wildlife in the area, and there’s a lot more of the latter rather than the former. It actually makes for a pretty laid back viewing experience. Or at least it does until the final third of the film when they finally encounter the creature. Then the whole tone of the film pretty much changes and the horror aspects come out to play. It’s actually a little jarring to be honest. Of course, the film’s so low budget that you only ever get a shadowed glimpse of the creature and the most it ever does is throw rocks at the characters and mess up their camp, but when it yells it also makes one of the most disturbing, god-awful sounds (it is supposedly an actual “real-life” Sasquatch recording) that it ramps the creep factor up to 11, even though you can’t even see the stupid thing beyond a blackened silhouette. The film’s major downsides are that it’s very low-budget has a tendency to shine through and that it sometimes feels just a little too hokey. While some of the cinematography is nice and majestic views are spectacular, it’s also clear that the physical movie itself wasn’t taken care of. The film is filled with pops and scratches and dust marks throughout its runtime, and most of the film appears washed out, so brighter scenes end up looking too light and it’s almost impossible to discern what’s happening in darker scenes. There’s also several rather jarring editing blips and some noticeable sound issues from time to time. None of it keeps you from being able to tell what’s going on, but they are pretty obvious. As is the film’s unusual need to inject bits of forced comedy into their little docu-drama. Sometimes they try to do it via the wildlife footage, but most of it is centered around Barney, the expeditions hillbilly cook. Barney seems to have been the filmmakers excuse to not so subtly introduce their slapstick routine onto an unsuspecting world. Barney drops things, falls down a lot and is the brunt of everyone’s jokes when it comes to his cooking. He is the filmmaker’s excuse for levity in an otherwise serious production. Some people may find it amusing, and it does lighten the mood. But it also doesn’t feel like it fits in with the rest of the film, so your mileage may vary.

Barney’s not good at frypan sledding, I take it.

Sasquatch is an interesting little docu-style film that feels more like a nature documentary than it does a story about finding the actual titular character. The film has some breathtaking scenery and a high sense of atmosphere that may help viewers get through it’s very slow beginning, but the more ‘cheesy’ aspects of the film may ultimately be a turn off. When it comes to the Sasquatch you can see little more than it’s outline. The rocks it throws are clearly made of paper mache. Characters talk about heading off to “Bigfoot country” as if it’s an actual place you can pinpoint on a map. The old, rugged mountain guide looks about as comfortable on a horse as a dog does on a jet ski. Their “Indian” guide is played by a white guy named Joel Morello. There are a bunch of shoehorned in comedy bits featuring a guy named Barney….When it comes to the film’s quirks the list goes on and on and will likely only appeal to a select viewership. Actual documentary fans will be turned off by the scripted hokeyness. People looking for a horror film will likely be very bored, as the horror aspects are few and far between and light on content. But bigfoot enthusiasts might get a kick out of it. The retellings of the well-known bigfoot stories, and the use of the Patterson footage will likely be worth it, as those recreated stores are fairly well done and pretty creepy. So if you’re interested in nature and bigfoot, and can stand a rather sedate pace, then this might be something worth looking at. But for those looking for something a bit less cheesy and more scary, you’ll likely want to look elsewhere.

Sasquatch is available for streaming on Amazon.

It is also available on Bluray from Code Red, as part of a double bill with Encounter with the Unknown. 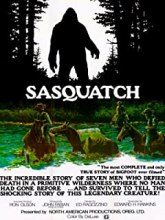