AKA: Nightmares in a Damaged Brain
AKA: Blood Splash

George Tatum has just been released from a psychiatric institution. He had been incarcerated there for several years, after he brutally murdered and sexually mutilated an entire family in Brooklyn. But after years of therapy, drugs and experimental procedures, George has been declared “reformed” and is released, his program having been deemed a success despite his continued insomnia due to traumatic dreams. But whatever program he was on clearly had its flaws, because one peep-show later and George is having flashbacks to how he brutally killed two people when he was a child. Perhaps predictably, George flees the area and heads south to Florida, leaving a trail of bodies in his wake.

Meanwhile down in Cocoa Beach, misplaced serial killers are the last thing on Susan’s mind. She’s too busy trying to juggle her new, budding relationship with her boyfriend Bob, and dealing with the responsibilities of being a single mother, especially where it concerns her rather rambunctious son, CJ. Between her job, losing the babysitter and CJ constantly getting into mischief, she barely takes notice of all the recent hang-up calls. But CJ has taken notice. He’s also noticed a strange man hanging out near their house. Only problem is, CJ has garnered a reputation for fibbing, so by the time he finally tells the truth it may be too late to do anything about it.

Though if The Shinning taught us anything, it’s never too late… to make an argument for more solid doors.

Nightmare is an American slasher from 1981. In many ways it’s almost like a grindhouse feature: it feels grungy and dirty, and is filled with clearly exploitative moments and raw acting. Yet it also often feels very dreamlike, a feeling that’s helped along both by the film’s lack of anything resembling common sense, and by George’s frequent flashbacks to the brutal “dreams” he suffers from, dreams that may or may not be real. It’s an interesting combination to say the least, one that people will likely either be drawn to or feel apathetic about.

I think where the movie really shines is in its aesthetic. The film deals with some pretty dark subject matter, what with George’s pseudo-sexual motivations and his willingness to slaughter children while in the middle of his psychosis, and the film’s visuals really accentuate that. Even in the more upscale prints, the film still feels rough and grimy. A lot of scenes are purposefully dark or quick and manic, depending on the circumstance, or shot at a purposefully odd angle, especially if George is in the middle of an “episode.” It’s not necessarily pretty or aesthetically pleasing, but it does often complement the setting.

Nighmare’s other strong point is undoubtedly it’s gore, courtesy of artist Ed French, and not Tom Savini as some of the promotional material suggested (though Savini did give advice and was apparently on set at one point). Throats are slashed, head’s literally roll, and there are plenty of brutal stabbings with a variety of very pointy instruments. And director Romano Scavolini makes sure you don’t miss a single moment of all that bloody death. The audience is often granted a front-row seat to every gritty, bloody detail of death and/or dismemberment that the film can throw at you. All that gore is one of the reasons the film gained such notoriety in the UK, as the violence landed the film on that country’s list of “video nasties”, with a successful prosecution being brought against one of the distributing companies in 1984 for having the gaul to release an uncut version. Though some of the effects perhaps haven’t aged as well as some other films, they still end up being pretty effective. Just note that if you want to see the really gory bits, you have to track down the “Uncut” version. Really the oddest (or most delightful depending on your point of view) thing about Nightmare is just the damn lack of common sense when it comes to the characters and how they interact with the world and people around them. This is just NOT how people or professionals behave. Characters overreact to slight inconveniences, and then underreact when something important happens. The “doctors” treating George never bothered to investigate his past to see if his dreams were actually dreams or if anything he said to them had actually happened. They just sort of assumed the crazy murderer was telling them the truth and then medicated him accordingly. The movie is just peppered with strange situations like this. The most egregious of such instances involves the cops bringing CJ, who is just nine years old, and his mother down to an active crime scene so that CJ can identify the body of one of his friends. I’m sorry, what? How does that even remotely fall into standard procedure? And then to make matters worse they proceed to interrogate him right there on the spot! In the open! Surrounded by pedestrians and journalists and whoever else happened to be in earshot. It just doesn’t make any sense, and despite how amusing they may be, instances like that do run the high risk of completely taking you out of the film. Even the kid can tell this is stupid.

I’d heard people laud about the impressive gore effects in Nightmare long before I watched it. Those people were not wrong in their praise. As far as 80s slashers go, the blood and gore is pretty impressive and the violence is the film’s central spectacle. So if that’s your litmus test for a potential slasher to watch, then you’re in good hands. But if you’re looking for a slasher with a more coherent story then this one is going to be a more difficult watch. It’s still perfectly easy to follow, but the jumpy edits mean you’ll have to pay attention, and the characters lack of logical motivations, or in some cases basic cognitive reasoning, mean you’ll have to give it a little leeway. Other than that, the acting isn’t bad for a low budget slasher, the pacing is pretty good, it’s super creepy and the grindhouse-type atmosphere fits in perfectly with dark subject matter. So overall I’d say the film’s not too bad.

Nightmare is also available on DVD and Bluray, but the bluray is a Spanish import that may or may not be compatible with your player. 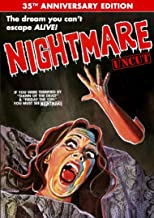