Troll Hunter is a docu-style horror drama (so shaky cam ahoy!) that follows a small group of three college journalists as they try to expose a rather shady individual whom they initially believe to be a bear poacher. What they find instead is a disillusioned troll hunter, mythological beings and a government conspiracy. 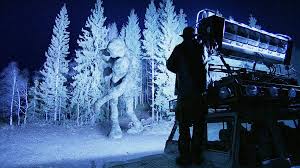 I actually quite liked this film. The trolls are all varied, distinct and look pretty damn good for CGI. The acting of their human counterparts is also quite believable and appropriate, never once going too over-the-top, as it could have very easily done.

A lot of time is spent explaining the troll scientifically (like why they turn to stone in daylight, and so forth) and placing those fantastical beings in our modern world in a logical and believable (if you don’t think too hard) way.

Which brings me to my one real qualm with the film- other than perhaps the previously mentioned shaky cam -and that regards the plot point of how the hunters, and in this case I mean the students, shouldn’t be Christian. Why? Because apparently the trolls can somehow smell that. With all the attention paid to the other details this tidbit just sort of gets glossed over and accepted as fact without any sort of explanations given about how a troll can suss a person out based solely on ones faith. With all the time spent explaining away everything else regarding the trolls, leaving this out feels more to me like a plot hole, or just a convenient excuse to freak out and knock off a couple of characters more than it does anything else.

However, even with those issues Troll Hunter still a fun film and it’s really neat to watch how they tackled the different trolls and their size and mannerisms. If you can get past a couple of unexplained instances and the shaky camera work, than there is some good stuff to be found here.

Troll Hunter is available on several streaming services, including free on Youtube.

Troll Hunter is also available on DVD and Bluray.