Two newlyweds’, Stefan and Valorie, plans are delayed when a crash on the tracks delays their train and causes them to miss their boat to England. Now stuck in Ostend, Belgium during the off season, the two check into a luxurious hotel, content with the complete lack of other hotel guests and with the intention of catching the next boat out to go meet Stefan’s mother and tell her of their recent nuptials (though Stefan seems dead-set on delaying the trip). But their solitude is cut short that night when the enigmatic countess, Elizabeth Báthory (Delphine Seyrig) arrives with her companion, Ilona. Seemingly lonely for more companionship, the countess instantly becomes enamoured with the young couple, insisting on insinuating herself in their lives. Stefan and Valorie think she’s odd, but ultimately harmless. But those thoughts begin to change when the middle-aged concierge tells them that he swears he met the countess at the same hotel when he was still a boy, some 40-odd years ago. Add in a string of strange murders in nearby Bruges and a retired police officer who seems to be following the countess around, and it doesn’t take long for the new couple to start thinking that maybe this outwardly friendly woman is more than she appears. Biggest shock? That the Queen of Darkness likes to knit. I guess we all need a hobby.

Daughters of Darkness is a 1971 Belgian, French and German co-production (in English!) about love, lust and sultry vampires. It’s based loosely on the story of Elizabeth Báthory, a 16th Century Hungarian noblewoman who, with four accomplices, was accused of kidnapping, torturing and killing up to 650 young girls and women via a variety of sadistic means. She is often referred to as The Blood Countess, due to rumors circulated long after her death of her bathing in her victim’s blood in an effort to remain youthful. With around 40 films either referencing or based on her story, Daughters of Darkness is far from the only film to use the Báthory name, but it may be the most modern and classiest one of the bunch.

One of the first things anyone is going to notice about Daughters of Darkness is how pretty the whole thing is. The cinematography and set design evoke a classical, yet gothic air, with a high emphasis on contrasting color rather than on light and shadow. Not that the film doesn’t have it’s moments of striking contrast, but those moments are the exception, not the norm. Brooding scenes of architecture and landscape stand in stark relief to the focus on subtle lighting and colorful visual flair. With the main cast consisting of mostly females, it perhaps shouldn’t be surprising that much of the film feels delicate. Scenes are filmed with soft edges and subtle glows that give off an air of not just surrealism, but also a hint of romanticism, making the film feel distinctly feminine, even in moments of abject horror. 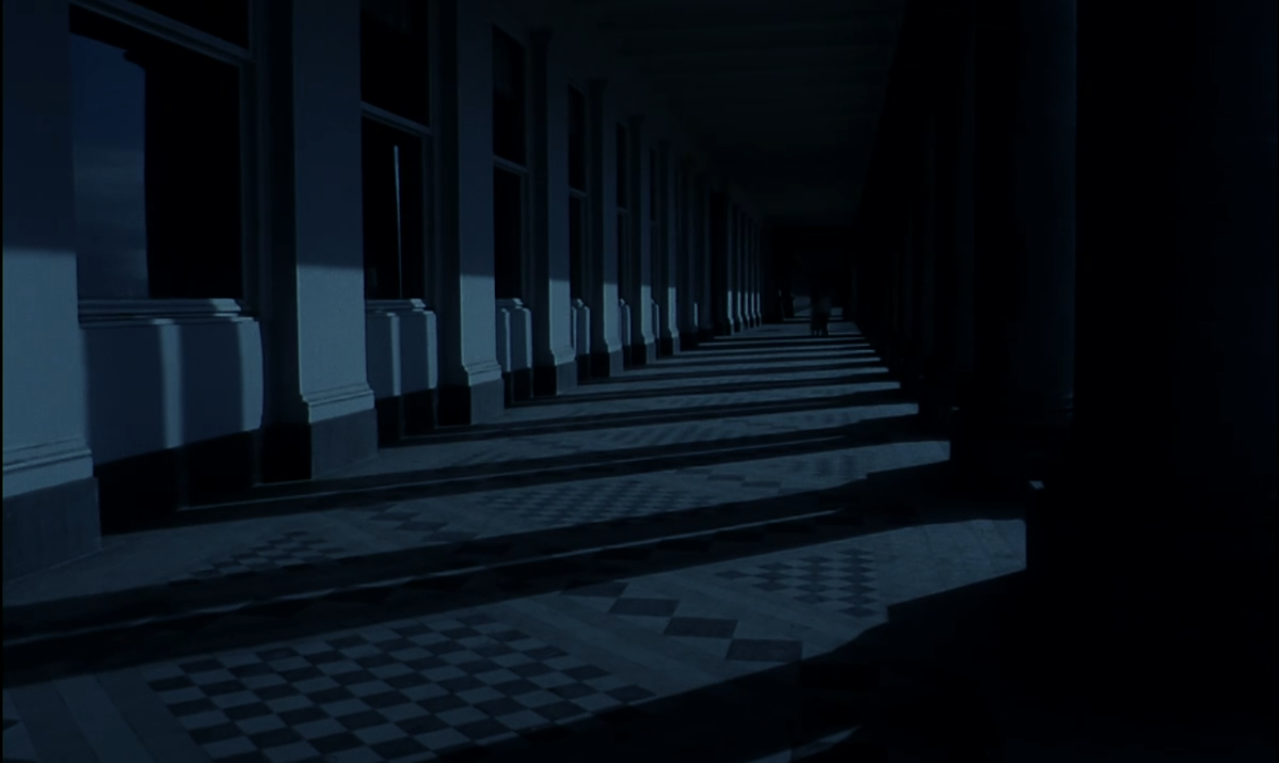 Some of the acting can be a bit hit or miss, but I think part of that can be blamed on the lack of characterization in the plot itself. Andrea Rau (Ilona) and Danielle Ouimet (Valorie) are both perfectly serviceable, but I imagine it’s hard to do too much when your main parts in the play boil down to ‘marital foil’ and ‘wounded bird’, respectively. John Karlen (Stefan) fares a bit better with the added subplot revolving around not wanting to visit his mother, who in fact turns out to be a middle-aged queen who finds the idea that Stefan would marry a woman almost laughable. The ridicule sends him into a rage causing him to beat a very confused Valorie, thus revealing his inner demons that the film had been hinting at for quite some time. 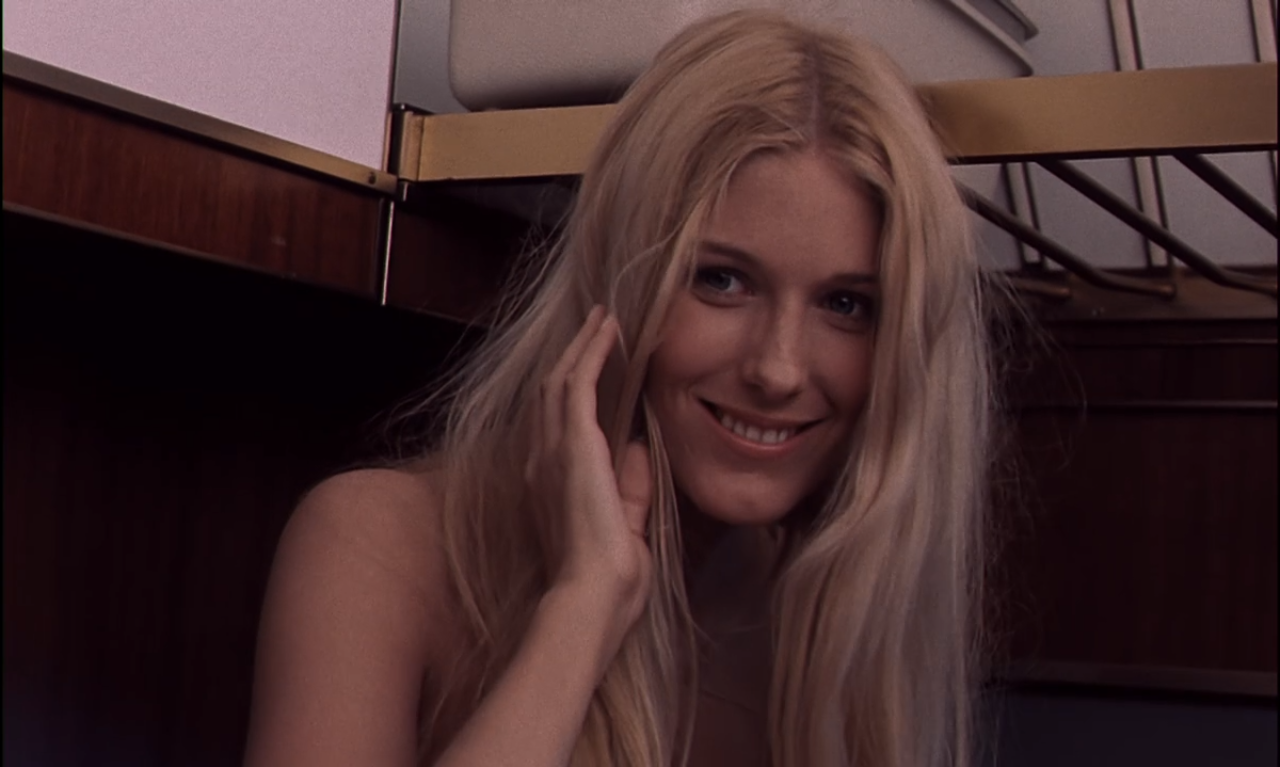 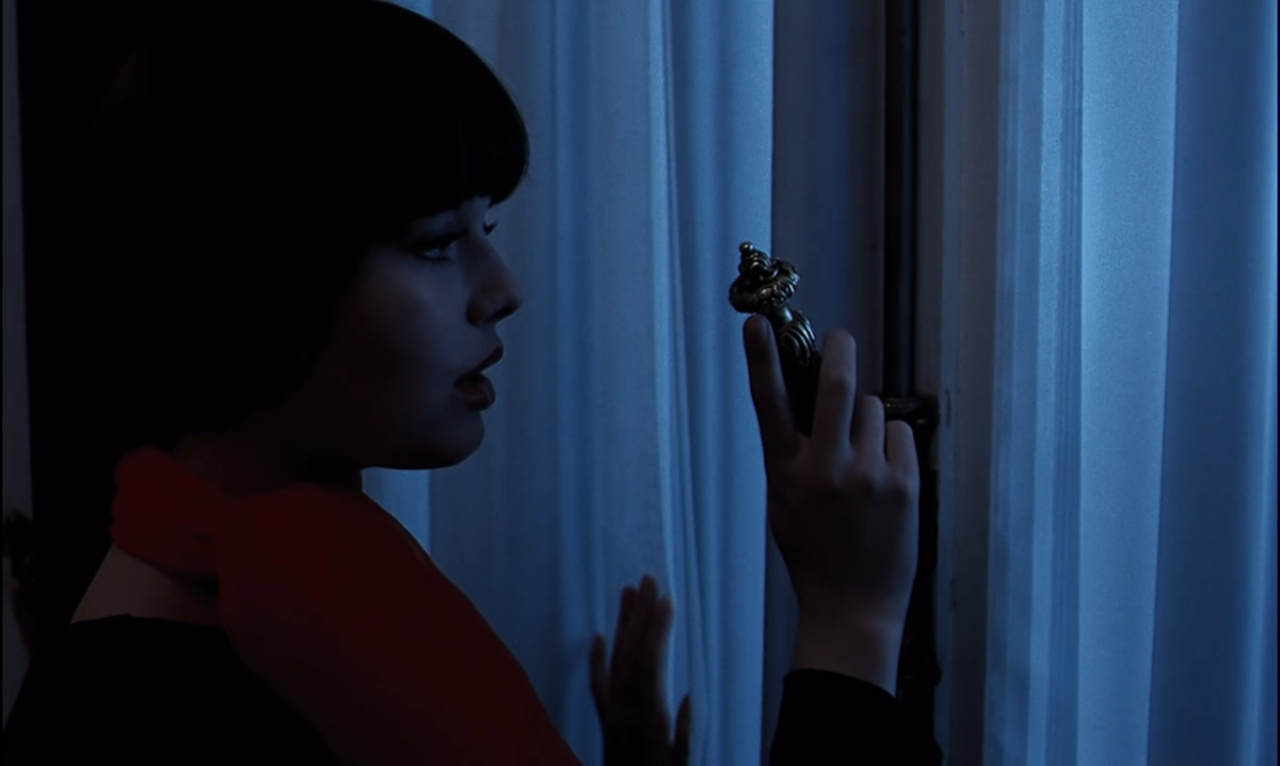 I tried to find a better shot of him. But ‘perpetually pissed’ seems to be his state of being in this film. But even with that small bit of development, Stefan barely registers as a blip in the character department. No, here the film’s main focus is set squarely on Delphine Seyrig’s sensual and provocative villain, Elizabeth Báthory, and I think it’s safe to say that she nails that role to a T. In Daughters of Darkness, Báthory isn’t your typical evil-doer or bloodthirsty vampire. Here she’s not only class and elegance personified, but she’s also an extremely intelligent master manipulator. The characters surrounding her all fall not merely because they are potential victims of a supernatural being, but because they themselves are victims to their own personal flaws. Valorie with her lovestruck naivete, Ilona with her dependency, and Stefan with his suspicious nature and need to dominate, all prove to be easy pawns for a woman with years of practice in dealing with the human experience. She is so good at what she does that she manages to turn a highly suspicious and disgusted Valorie into a willing and enthusiastic lover in the span of less than one night. That right there, ladies and gentlemen, is skill.

One night? You were trying too hard. I’d have willingly switched teams for you in 30 seconds.

Daughters of Darkness is a vampire film unlike most, utilizing a more elegant take on the vampire lore. There may not be physical fangs on display, but a feeling almost fevered psychosexual bloodlust still manages to permeate the entire experience, and the soft edges and vivid colors also make it feel like a slow, blood soaked fever dream. The acting is good, the main character is captivating, and the entire production looks gorgeous. Unfortunately the violent ‘shock’ ending feels a bit predictable and cliche today, but the class and elegance of the rest of the film make up for that one annoying flaw. If you enjoy erotic horror films, than this may be something you’ll want to take a look at.

Daughters of Darkness is available on several different streaming platforms.

It is also available (or will soon be available) on DVD and a new 4K Bluray.