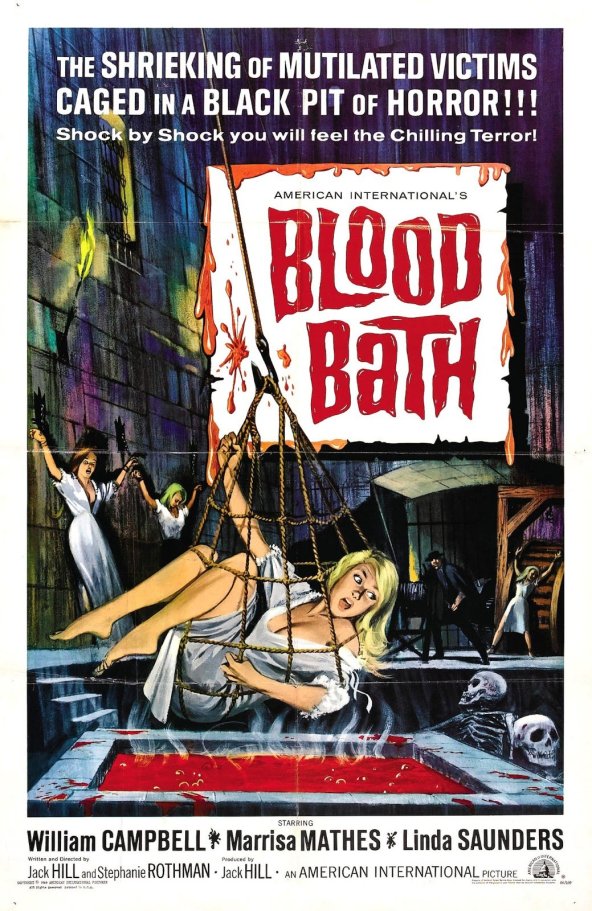 Back in the 1400s, a prominent local painter, Erno Sordi, is condemned to burn at the stake because the locals believe him to be a vampire who captures the souls of his subjects onto the portraits he paints. Over five hundred years later his descendant, Antonio Sordi, is part of the local art community where he’s known to paint morbid portraits of young women on the cusp of death. The only thing is, Sordi isn’t using his imagination to paint these portraits. Instead he’s killing his models and turning their corpses into macabre sculptures after dipping them into a vat of wax. Meanwhile, no one in town seems to know why several young women have gone missing, but when one of the missing turns out to be the girlfriend of another prominent artist it doesn’t take too long for him and his little enclave to figure out who the fiend might be.

Ah, damn. Beatniks. Someone get the spray.

Blood Bath is a 1966 American horror film with a bit of a bizarre background. The film, as originally conceived, was produced by Roger Corman (surprise, surprise) not as a horror film, but instead as a Yugoslavian-co-produced spy thriller entitled Operation: Titian. But apparently the finished product wasn’t up to Corman’s standards (I didn’t know he had any) and he hired Jack Hill (Spider Baby) to rewrite the script and incorporate some of the Operation: Titian footage. Hill added in some pseudo-intellectuals and a crazed murderer, turning the spy thriller into a horror film. But Corman was still unsatisfied, and hired Stephanie Rothman, who was his assistant at the time, to shoot yet more additional footage that added a vampiric angle to the plot, despite not having access to all the original actors. Corman, finally satisfied, released that cut of the film to theaters (though the movie received yet another re-edit, including alternate scenes, when it subsequently aired on TV under the title Track of the Vampire.)

If all that sounds like something that would result in a product that was at best mildly confusing and at worst mangled together, then you would not be totally off the mark. Though I must admit, even with that mish-mashed production the end result isn’t nearly as bad as it could have been.

Despite the many creative changes the film went through, it still manages to look consistently good. Much of the film feels dark and dreary, an excellent complement to the horror atmosphere. Though that by no means should suggest that the whole movie is filmed in nothing but shadow. There are also some brightly lit beach and city scenes, but even then the film manages to make those moments seem ominous. All the streets of the (seemingly) large city seem devoid of people and the expansive beaches appear desolate. I’m sure the reasoning behind this was that the production was too cheap to hire any extras, but the film’s almost pervasive emptiness adds a consistent sense of dread to the entire picture. I was amused to see that the film had a sense of humor about some of its subject matter, especially in regards to the art world. Apparently even people in the sixties were annoyed by the pretentiousness, and in some cases outright stupidity, that cultivates around some artistic circles. The film does a good job of making fun of such characters without outright mocking them however, and you could tell that the actors (including Sid Haig) were having a good time. The film also made sure that their time on the screen was blissfully brief, just long enough to prevent them from becoming overly annoying. And just in case they didn’t succeed, the movie makes a point of making these characters the good guys, because why they may be pretentious twats, they’re also well meaning pretentious twats who jump to the aid of their female companion at the first sign of trouble. It’s hard to be mad at a bunch of idiots who spend the final act of the film willingly running down a vampire because he was chasing after a woman. And not one of them was dating her. I’m mildly impressed, 1960s.

Of course then genius here decided to climb up a pylon and I once again became mildly concerned.

I know this is probably symbolic of something….but what…?

The film’s unavoidable flaw however, is, naturally, it’s plot. The cobbled together story is janky at best, as is often the editing of such elements. The vampire parts feel like they’re coming out of left field (and to be fair, they are), and although the goofy beatniks are amusing, the lighthearted tone of their scenes clashes horribly with the seriousness of the rest of the story. I’ll give the film credit for managing to turn all these haphazardly added ideas into a mildly coherent plot, but considering how the film was constructed it shouldn’t be surprising that there are still a boatload of plot holes and odd additions throughout. For instance, the one female victim who was smart enough to discover Sordi’s secret and follow him, is suddenly struck by a case of the stupid, and tries to flee from him by…jumping on a Merry-go-Round. And in the climax of the film, one of Sordi’s wax victims is revealed to be a man. Now, if you’ve only watched Blood Bath, you’ve never seen this man before, he’s just apparently some random victim. But in the re-cut TV version of Track of the Vampire there’s an added scene involving a stripper and her gangster boyfriend who gets a little jealous of our dear demented designer and winds up getting a wax bath for his trouble. But since that entire segment wasn’t included in Blood Bath, his two seconds of fame makes absolutely no sense.

Honey, no matter how far you ride you do realize you don’t actually end up going anywhere, right?

Hey Gangster Guy we never met and I had to look up. How’s it going? There are a lot of scantily clad women though. Maybe some of you will think that makes up for it?

So Blood Bath winds up being a bizarre little tale, both in a pre and post production sense. The acting is good, the atmosphere is lovely and it’s got some great imagery, but it’s pieced together plot is just barely on this side of making sense and it’s janky editing doesn’t do it any favors either. It still manages to be pretty entertaining, but it’s almost more interesting to read about how it came to be than to watch the movie itself. But at only a little over an hour, it’s also a quick watch, so those interested in atmospheric murder tales might get a kick out of it regardless.

Blood Bath is available for streaming on Amazon Prime.

It is also available on DVD and a Special Edition Bluray which includes all four versions of the film for your viewing pleasure. 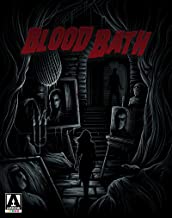