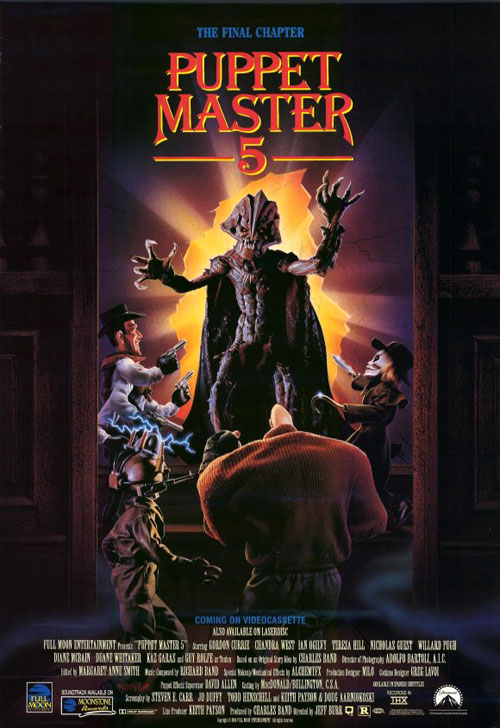 As any good horror fan knows, you can’t have a proper horror series without at least one entry valiantly declaring to be the ‘final chapter.’ Despite some misgivings, this one turned out to be a little better than it’s predecessor. But only by a little.

Puppet Master 5 began its task of trying to win me back over by opening with a scene that I suspect occurs to all horror movie survivors after the credits roll. By that I mean, having the police arrest the main character on suspicion of murder for all of the deaths that occurred in the previous film. 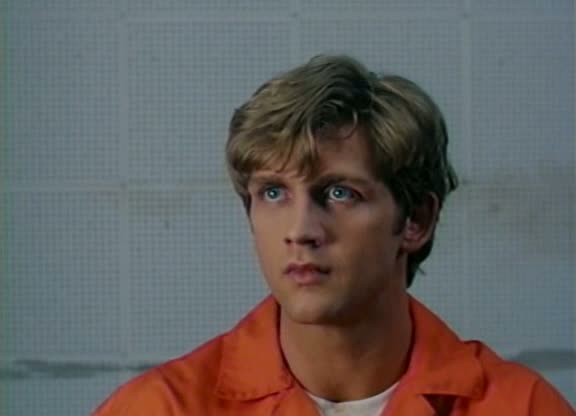 Aw, don’t worry, dude. You look like you’ll be popular in prison.

For some reason, the police don’t seem to like Rick’s explanation of, “It wasn’t me. The puppets did it!” Which, when you think about it, is a bit disingenuous. I mean, he’s blaming the deaths on killer puppets, when he himself is now in charge of a whole menagerie of…killer puppets. Also, for being a child prodigy, I’m surprised he isn’t smart enough to know that that explanation wouldn’t fly.

It doesn’t help that the police have confiscated Blade and are now using him as evidence. I guess they feel the puppet with the knife and hook for a hand is somehow suspicious, especially since all the victims look like they were used for a cutting mat. 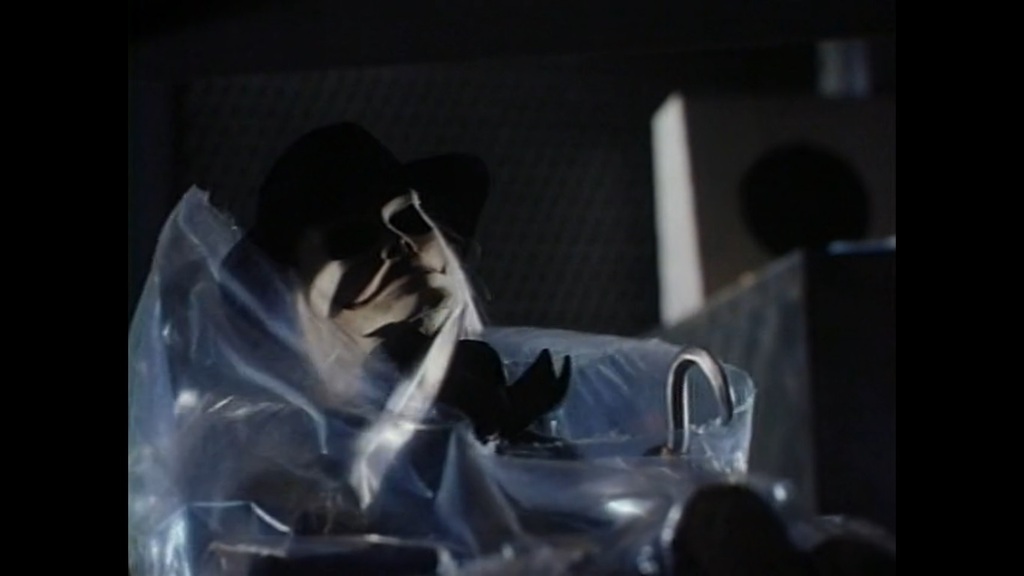 The irony is, the only thing he successfully cuts in either of these two movies is this evidence bag.

Ricks friends aren’t faring much better. No one believes Suzie’s story, either. And Lauren? She spends most of this movie the same way she spent the last one: mostly unconscious. Though she does occasionally wake up to yell out her predictions like a raving lunatic. 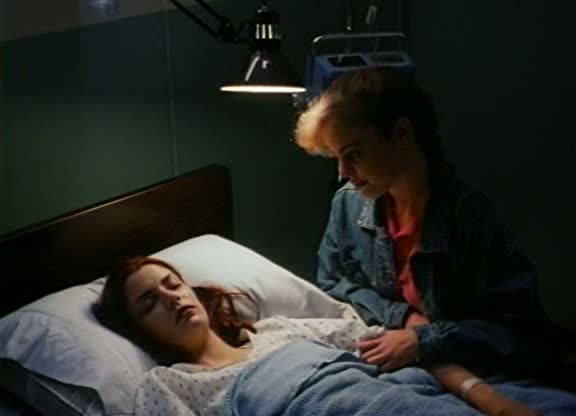 For once, being on drugs in a movie isn’t an immediate death sentence.

The only person who seems to believe Rick, is his new boss, Dr. Jennings. But Jennings doesn’t really care about Rick. He’s more interested in the possibility of a big, fat check from the military in exchange for an artificial intelligence prototype. Since most of his scientists are dead or suspected of murder, Jennings doesn’t have one on hand, but thanks to Rick’s story he thinks he knows just where to find it. Instead of being a sensible scientist and just asking Rick for the information, Jennings decided to personally go to the Bodega Bay Inn (sobs) with the newly hired goon squad of Larry, Moe and Curly to try to find the puppets and the formula. 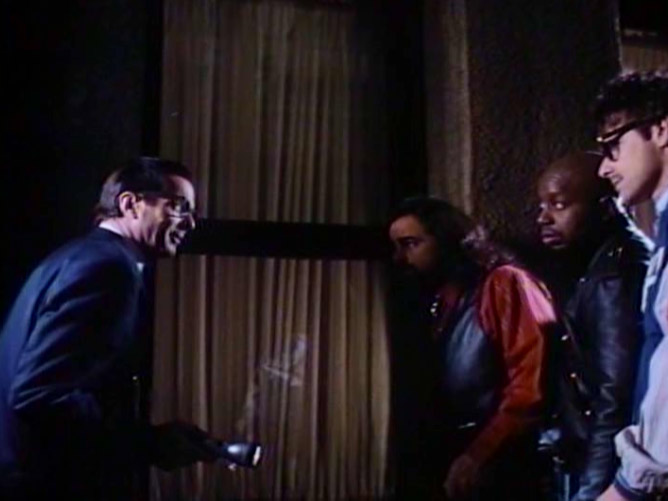 I’ll give him credit for being a hands-on mastermind, but he’s still an evil idiot.

Meanwhile, Rick feels something’s wrong and heads over to the Inn himself and all this is going on while the evil demon Sutek is planning on sending his personal little soul-bound avatar to kill Rick and the puppets. 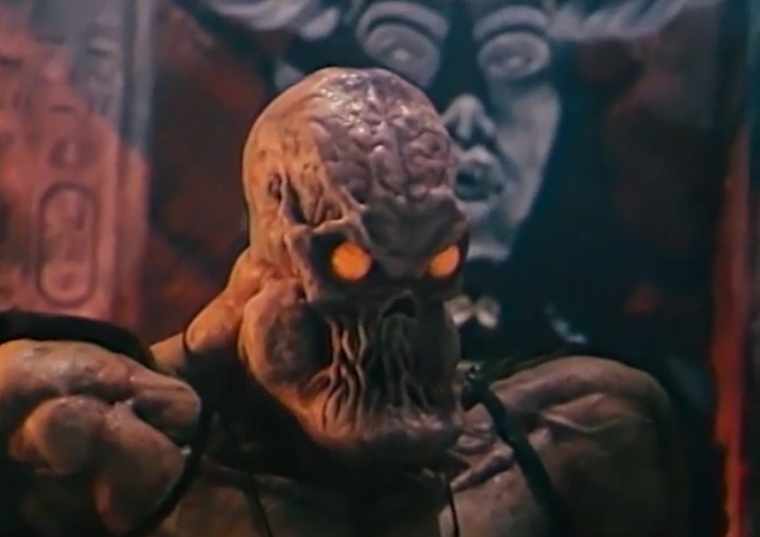 Well, at least they tried to make the backgrounds look more Egyptian this time around.

If you couldn’t tell, the plotline for Puppet Master 5 is directly tied into the plot for Puppet Master 4. Both movies were filmed at the same time, and I have a sneaking suspicion based on the pacing and the cut-off point of the 4th one, that both of these were supposed to be one complete film. But Full Moon are a bunch of cheap buggers, so they went the Deathly Hollows route before Harry Potter was a thing. Basically, all you need to know is that the jumble of words you have been reading is really just an excuse to watch the puppets screw with some thugs, kill a guy and fight the big, bad, evil puppet at the end. 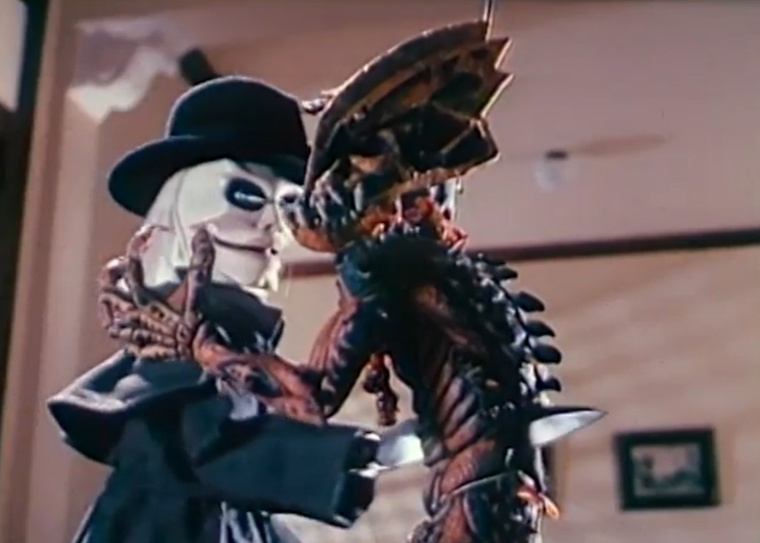 I know what you’re thinking. It’s not a successful cut. Blade was surprised, too.

As expected, continuity is again an issue with this installment. For one, Torch makes his return to the series, after being suspiciously absent in the last film, and despite being front and center on the poster for the last damn film. I’m not sure if this means they mixed up the posters, or if they just cut out scenes involving him from the first one altogether (how dare they). Either way, it still doesn’t explain how Rick innately knows who he is, despite having no previous interaction with the little flame bug. 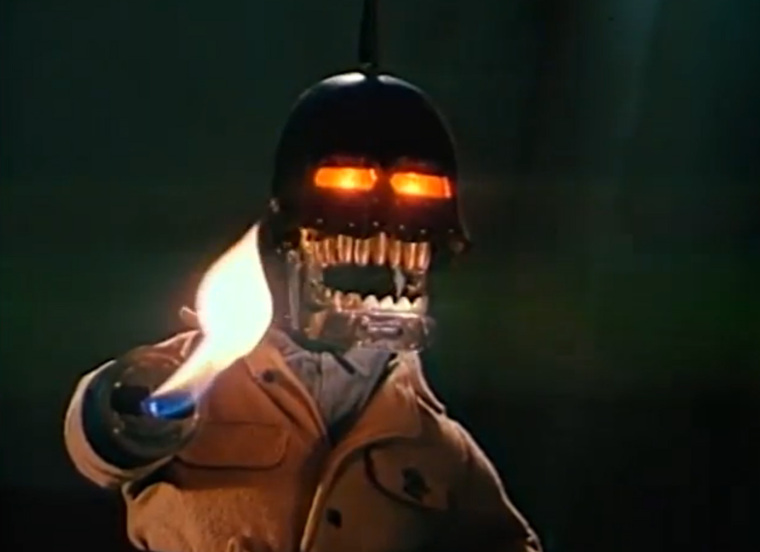 He’s so happy to be back. I missed you, you metallic little arsonist.

Rick also has to turn Decapitron into a lightning rod again, because… I don’t know, one good classic monster-movie reference deserves a repeat, I suppose.

Sutek is also mumbling this go round about discovering Toulon’s secret, as opposed to just killing off everyone who knew Toulon’s secret. Not that anyone knew Toulon’s secret when he initially sent out his minions in the last film. And really, none of the guys his little avatar knocks off have any knowledge of Toulon in this film either. So, either way, his motives are indecipherable. I don’t know. It’s a head scratcher. I’ll blame it on the six script writers. 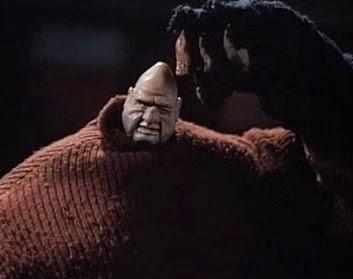 None of the acting has really improved over the last film. The previous actors return to reprise their roles (or continue them) and the new additions are just your typical, cookie-cutter buffoons and corrupt scientist. The script fares better this time around and for the first time in the series there is an attempt to add some humor, like the scene where one of the thieves insults Pinhead only to get punched in the face and hit in the nards with a meat mallet. 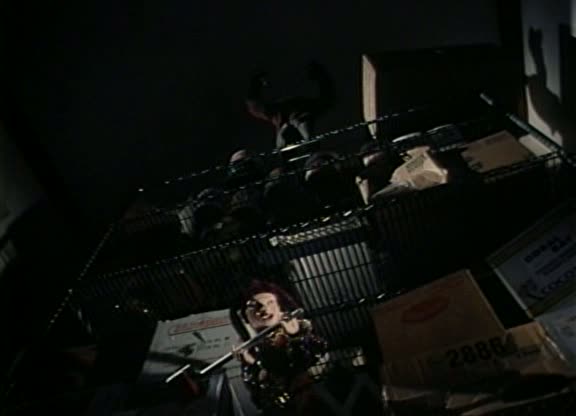 But, of course, those moments are few and far between, and they do little to help the films continued pacing issues.

Puppet Master 5 was supposed to be the grand finale of the series. Of course, that didn’t happen, but it can be considered the finale to what’s widely considered to be the “good” films. Both 4 and 5 should have been one continuous movie. It would have solved the pacing issues and let us focus more on the more interesting puppets, instead of the boring humans or even the villians. The evil Sutek continues to be lame, and the introduction of his avatar, something that is built up for about half the movie, just ends up being another boring gremlin creature wearing a necklace. And the ending just comes across as another rehash of the one we got in Puppet Master 4. Really, the only stand out quality is the continued high-grade puppeteering work, and even that suffers a little in the end (I could see strings. That never happened before.) But even with all the problems, it still manages to be a little better than Puppet Master 4. If anyone is interested in these two films (are any of you still reading these Puppet Master write-ups?), I suggest watching them both back-to-back. They’ll make slightly more sense that way. Slightly.

And with that, I’m officially done (read: tired) of Puppet Master. At least for now. Maybe after a while I’ll be able to stomach some of the rest of them. But today is not that day.

Puppet Master 5 is available to rent on Amazon. 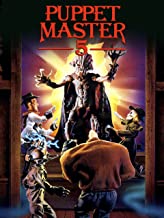 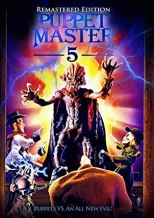 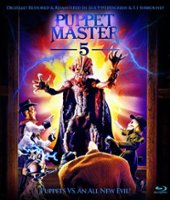