The Butterfly Room is about Ann, an reclusive older woman with an affinity for butterflies. Some time in the past, Ann is befriended a charming, yet eerie young girl named Alice. The two of them establish a bizarre mother-daughter relationship, but Ann soon discovers that she is not the only woman vying for Alice’s affections. The sudden shock of this discovery awakens Ann’s dark, inner madness.

Back in the present, Ann meets another young girl, nine-year-old Julie, the daughter of her next-door neighbor. Ann befriends the girl and as they spend more time together Julie starts to explore Ann’s apartment and starts to uncover the dark secrets hidden within the older woman’s forbidden butterfly room.

The Butterfly Room is a movie filled with familiar horror fan faces, both new and old: Barbara Steele, Erica Leerhsen, Camille Keaton, Adrienne King, P. J. Soles, Heather Langenkamp, Ray Wise, James Karen…Even if their names don’t sound familiar, their roles in everything from Black Sunday, Blair Witch 2, I Spit on Your Grave, Friday the 13th, Halloween, Nightmare on Elm Street, Twin Peaks and Poltergeist should ensure that at least their faces look familiar. Seriously, this movie is like The Expendables, but with horror icons.

All these familiar faces not only make me obnoxiously giddy…

Be still, my heart

….but also ads some necessary weight to a film with a heavy focus on the two child actors. That’s not to say that the kids seen here are in any way bad, but they are young, with limited film credits and such things always come with certain caveats.

That said, the primary focus here is on Barbara Steele’s, Ann, and my, was it a pleasure watching her slowly descend into Crazy-Town. Steele naturally brings a level of elegance to anything she does, but she also weaves in elements of the powerful and the exceptionally creepy. Here she is all beauty, elegance and sinister and it was a joy to watch her flip between the three, all while her character tries to maintain a persona of harmlessness.

I mean, she’s a septuagenarian. She can’t actually swing that thing, can she?

The rest of the supporting cast is also excellent, even though several of their roles amount to little more than quick cameos. With all the who’s-who going on, the movie could have devolved into a ‘star-spotting-athon’, but they were all handled seamlessly enough to not be too distracting. Heather Lanenkamp boasts a more prominent role as Ann’s daughter, Dorothy, and it was nice to see her (and her pretty blue eyes) in an acting role again.

Though you’d think after all these years she would have learned her lesson about answering strange phone calls in the middle of the night.

The film involves a lot of flashbacks. It actually begins towards the end of the story and then slowly interweaves between the past and the present. I was concerned at first that this might cause confusion, but the transitions are pretty seamless and easy to differentiate.

The way the film is set up, the viewer is initially sympathetic towards Ann, who comes across as a lonely, if not eccentric, woman who just seems to be looking for a little companionship. But then as the pieces fall into place and we learn some of Ann’s motivations and the reasons for some of her eccentricities, the viewer discovers just what Ann is capable of and what that revelation might mean for poor, young Julie.

Or anyone else, for that matter.

I found The Butterfly Room to be a very enjoyable thriller. The characters are well developed and well acted. I enjoyed the film’s focus on exploring the mother-daughter relationship and the lengths one might go to in order to try to preserve it. It’s a slow burn of a film, with the horror slowly piling up upon you until the very end. The scares are old school (as is much of the cast) and the visuals are reminiscent of Jonathan Zarantonello’s Italian roots. It’s a movie that achieves its goals and uses a more old fashioned approach to story telling while still feeling current. I would consider this a must-see for anyone interested in the nostalgic or the oft-neglected ‘vengeful old woman’ sub genre. Or anyone who just wants to see Barbara Steele being excellent at being…Barbara Steele.

Just remember, whatever you do, do not piss off Barbara Steele.

The Butterfly Room is available to rent on a variety of streaming services.

It is also available on DVD, but it looks like any non-european version may be out of stock at the moment. 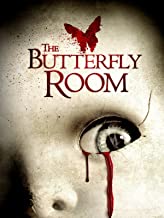