NYPD detectives Powell and Shepard have two very strange cases on their hands. The first involves a bizarre series of ritualistic murders where living victims are either filleted alive or have their hearts cut out of their chests. The second case involves a strange string of disappearances that all seem to be followed up by sightings of an unusually large bird seen flying around Manhattan. Meanwhile, while the two detectives try to figure out what to make of all these strange occurances, two-bit crook Jimmy Quinn, on the run from some not so friendly ‘associates,’ stumbles upon a corpse and an egg in a ridiculously large nest hidden at the top of the Chrysler Building. So what’s a skeevy little opportunist like Jimmy to do? Try to make a quick buck of course.

Yes, your safety potentially lies in the hands of this man. You should be concerned.

Q: The Winged Serpent is a 1982 American monster film by Larry Cohen. Cohen, who had already made Black Caesar, Hell Up In Harlem and It’s Alive (and would later also pen The Stuff and the Maniac Cop films), was at that point no stranger to cult cinema, but Q was his first real creature feature. Cohen liked the look of the Chrysler building and decided that if the Empire State building deserved a monster then the aesthetically pleasing Chrysler tower deserved one too. But while the film may have some noticeable issues that still manage to keep the movie squarely within the realm of ‘cult status’, it’s also filled with an impressively capable cast and some very entertaining effects.

Keep in mind I said ‘entertaining’, not ‘good.’

Okay, let’s get one obvious thing out of the way. See that giant winged serpent on that poster up yonder? That’s the movie’s title character Quetzalcoatl, AKA “Q”, the winged reptilian god of the Aztecs. The poster is by Boris Vallejo and that image up there is about as good as Q ever looks, because when you do finally see the creature it ends up looking like this- Yeah, that’s really not even close. The face is different, the claws are different, the wings are different. Hell, the only thing they really got right was it’s squiggly little tail. It’s understandable to feel a little cheated after seeing that poster. After all, the poster makes you go in expecting some sort of fanged dragon, but instead you end up with a flying reptile that looks like it’s some kind of cross between a garden lizard and…. one of those Tremors creatures I guess, but with less pizzaz. But despite that visual disappointment, thankfully our little claymation beast is actually animated surprisingly well. Sure it looks like Manhattan is being attacked by some Clash of the Titans reject, but the thing moves fairly fluidly, which is more than I can say for some of its hapless victims. Guy needs to eat more. He fell at the rate of a damn feather. It was embarrassing.

After seeing the quality of poor Q, one might suspect that the acting in the movie would be less than stellar. But the movie is blessed with a stellar cast, including Richard Roundtree, David Caradine and Michael Moriarty. Moriarty in particular is very impressive and essentially steals the spotlight from all the others. His character, Jimmy Quin, is an unlikable, weasley little coward who you wouldn’t trust to watch your cactus for fear that he’d take it to the nearest street corner and try to sell it for a nickel, and Moriarty plays him to the hilt. Jimmy’s only flaw lies not within his character or portrayal, but in the story itself. The plot seems intent on trying to make the little bastard likable, even redeemable, yet gives him no actual redeeming qualities. He abuses alcohol, abuses his girlfriend, cheats, steals, tricks two guys into getting eaten alive, manipulates the city into paying him to reveal the location of the ‘bird’, and then does nothing by the end of the film to try to counteract any of that beyond saying that he’s going to try harder to do better. Um….yay. Good for you, I guess. Still not sure why the movie wants me to like you, though.

The film’s rated R, so unlike other big monster films like, say, Godzilla, there’s quite a lot of blood here. In fact, the bloody bits start up pretty much right off the bat, with a window washer losing his head in an apparent fly-by within the first couple minutes. You also see a bunch of bloody limbs laying about, see one guy start to get flayed alive, see another guy loses his heart, and we’re graced with one (kinda hokey looking) skinless corpse. But while that may sound promising to the gore hounds, most of the bloody bits are thrown at us in the first half of the film, with only a few little bits strewn into the rest of the picture. Hell, even the climax of the film where the police are trying to shoot the lizard queen down is surprisingly lacking in gooy redness. It’s not a big deal, but it does make the movie feel a little disjointed, content wise. Not sure if that was unintentional, or if their blood budget just ran out. 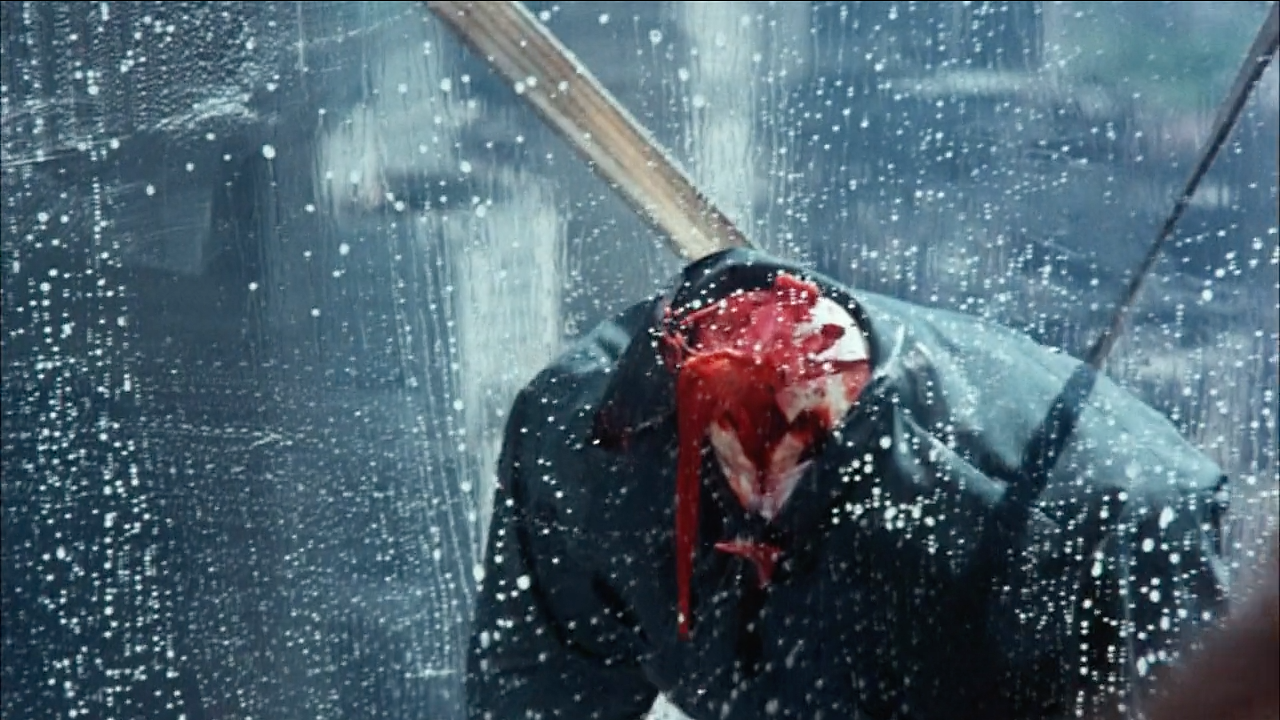 Far be it from me to speak ill of the dead, but…WTF is up with your eyes….

On a side note, while I may not know what was going on with their blood allotment, I do know that the forced foul motif was completely intentional, as it popped up all over the damn place. They loved to use it in transitions, those clever bastards.

They weren’t subtle about it either. 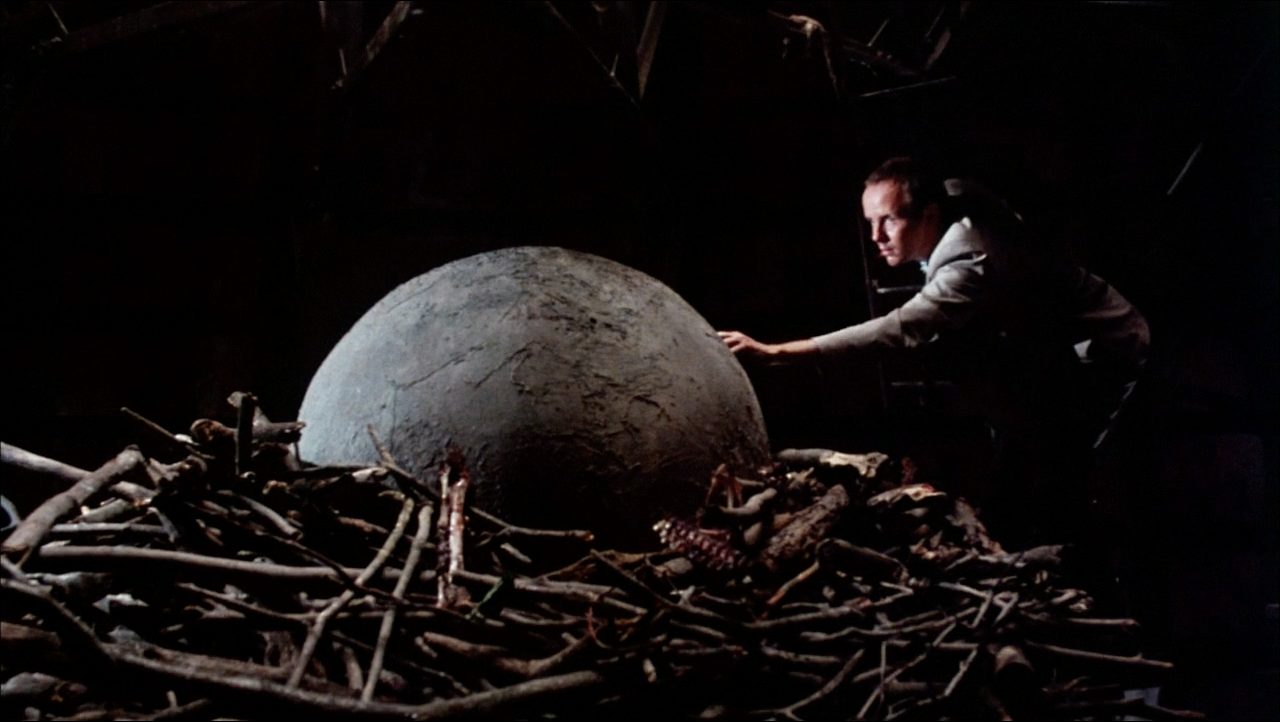 The film’s one major downside is that the plot isn’t all that cohesive. You’ve essentially got three different storylines going on (Monster attack, police procedural, and buffoon on the run) and while they all manage to connect at some point, a lot of the connections feel paper thin and poorly thought out. The Aztec-related ritual murder cult angle surprisingly suffers the most, despite being the one most closely connected to the main draw of the film. It mostly feels like an afterthought, just a reason for a change of scenery and an excuse to throw a dead body into the mix. And when we do find out who the high priest is, it winds up being some random joe-schmo, not some character hanging around in the periphery. Then they make the cardinal sin of having the priest, a man smart enough to resurrect an ancient reptilian god who everyone thought was a myth, sound like a complete moron by having him talk about ‘plumes.’ As in Quetzalcoatl’s ‘plumes.’ Except that Quetzalcoatl doesn’t have any damn feathers in this movie. The Q version’s wings are just stretched skin. Are you telling me that this guy resurrected a god and didn’t bother to look at it? Perhaps he was being metaphorical or perhaps it was just a script goof, but either way it’s disappointing, as this is a guy who’s had the police scrambling for the majority of the film and it makes him sound like a doof. There are no plumes! It’s just tattered skin, damn it! Yes I know I sound petty, but I expect more of my crazed cult priests.

Q: The Winged Serpent is kind of like an americanized kaiju film. The monster is the thing that’s advertised, but the majority of the film focuses on the human characters (or really one specific character) and their interactions with each other, rather than their interactions with the monster. The monster may play a pivotal role in every storyline, but it’s really not the focus. But while the characters are all portrayed by very good actors, their stories don’t really flow all that well together, despite clear attempts to do so. Thankfully, the portrayal of the characters and the monster itself are all entertaining and fun enough to hold your interest for an hour and a half, even with the few noticeable hiccups along the way. It’s easy for me to see why this one is a cult classic.

Q: The Winged Serpent is available on several streaming services, including Amazon, YouTube and Tubi TV. 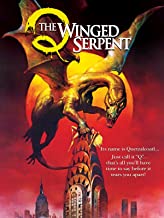 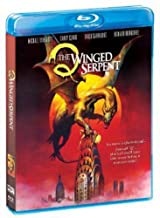