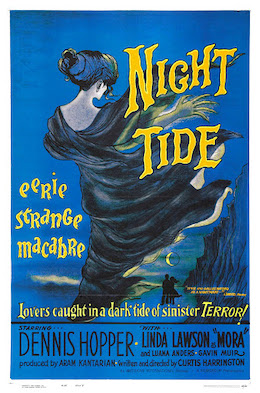 One night while cruising around with little to do, young, naive sailor Johnny Drake meets a mysterious woman at a local jazz club. Her name is Mora, and she makes her living by appearing as a mermaid in a nearby sideshow attraction. Johnny is immediately smitten with the soft spoken woman who loves the ocean and lives in an apartment above a merry-go-round, and soon he’s doing all he can to spend his weekends with her. But his idyllic little fantasy gets a wrench thrown into the works when the daughter of the merry-go-round warns Johnny that Mora’s last two boyfriends both drowned under mysterious circumstances. Mora’s adopted father, Captain Murdock, warns Johnny as well, and it doesn’t take long for Johnny to start to believe that Mora may actually be a real life mermaid, compelled to draw men down into a watery grave.

Night Tide is a film written and directed by Curtis Harrington that was finished in 1961, but didn’t manage to get any kind of official release until two years later. I found the film by searching through the horror section on Amazon, but just calling it a horror film doesn’t feel quite right. The movie certainly does have some ‘horror’ elements to it, but at its core I think it’s a psychological drama more than anything else. Though WTF is going on here is anyone’s guess.

The film’s greatest draw is clearly it’s atmosphere. I think the look of the film could almost be described as a ‘noir horror.’ It’s dark, it’s dank and it often feels sparsely populated, if not abandoned all together. Which is impressive when you realize the whole story is set at a beach town and a carnaval, something more associated with bright colors and exuberance rather than dingy, downtrodden bars and decaying infrastructure. All the dreary darkness forces an almost visible cloud of mystery over a seemingly simple tale of a young sailor and the object of his affection. Who are these people? Despite spending so much time with them, we don’t really know. The information we’re initially given is sparse, and each new tidbit of info revealed to us tends to raise more questions rather than give us answers, continually adding to the mystery until the film finally reveals just enough to tell us the true nature of the film, but not enough to give us a good idea of where it’s going.

The main character of the film is played by the late Dennis Hopper, a man probably best known for portraying some very compelling nut jobs. But Night Tide was his first feature film and instead of playing some sort of manic loon, here Hopper portrays the naive boy-next-door type. It was honestly a little disconcerting for me at first to see him this way, face soft and honest and eyes wide with empathy and concern, as I’m used to his more well known…intensity. But he actually does a standup job in the role, giving his character a sense of vulnerability and earnest engagement. Damn it, man, stop smiling. You’re creeping me out.

Meanwhile, Lina Lawson’s Mora is equal parts calm and clearly broken, with just a little bit of mysterious foreboding thrown in for good measure. It’s clear there’s something not quite right with her, and that’s really the subtle focus of the film, because while we know something is wrong we don’t clearly know what’s wrong. Mora’s moods seem to fluctuate between serine and nervous energy. Does it have to do with her sad past? Her caring, but strange adoptive stepfather? And who’s this strange woman who seems to be following her around? Alas, we don’t get to know all the answers to those questions, but Lawson does an excellent job of relaying all of her mixed emotions, sometimes with something as simple as a look.

I don’t know what she’s supposed to be morning…maybe her lack of eye makeup.

The film has a quiet beauty to it thanks in part to its location at Venice Beach. The movie was filmed at a time when the area was shifting its focus from a resort town, so the whole film is peppered with a variety of different aesthetics, everything from the beach, to the boardwalk’s carnival culture, to some Italian (I think?) inspired architecture, to a bunch of oil drilling equipment. This mish-mash of styles not only keeps the film from being visually boring (whatever will they show me next?), but it also does wonders by adding a surreal bent to the atmosphere the film is going for. Add in some very nice camera angles, and a strong focus on composition and contrast and you’ve got yourself a film that’s more than a little pleasing to the eye. Night Tide is a beautiful and fascinating psychological tale with a surrealist bent. It’s well acted, well paced, and drowning in an atmosphere of quiet mystery. It’s the kind of movie where you’re never quite sure what’s going on, and even when the movie gives you an explanation at the end you’re still not sure if it really gave you any answers because there are still mysteries yet unsolved (who the hell was that woman!). If you like psychological horror films and don’t mind the black and white, then Night Tide may tickle your fancy. Just keep in mind that the film falls squarely in the realm of ‘slow burn,’ so if you’re looking for more high-octane in your horror, then this ain’t gonna fit the bill.

Night Tide is available for streaming via Amazon Prime and Tubi TV.