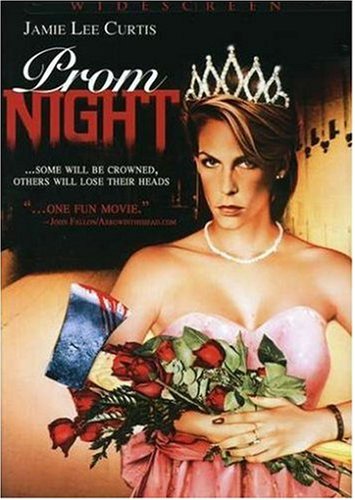 It’s prom night at Kennedy High and all the kids are excited for the big night. But a small group of them have a deep, dark secret they’ve been hiding for the past six years, and tonight that secret is about to come back and bite them in the ass.

And sadly, I’m not referring to their hidden love of disco. They let that travesty out in the open for anyone to see.

At this point, Prom Night is a pretty familiar slasher film for most. It’d be hard for horror fans to at least not heard of the simple slasher, since it’s stars early scream queen Jamie Lee Curtis (long may she reign). Curtis finds herself in a familiar situation in Prom Night, once again being the last gal that has to go toe-to-toe with a crazy masked killer. The only difference here, is that she’s not actually the target this time around.

She’s also learned how to better use a weapon.

Well, at least she’s not the target of the killer. She does manage to catch the ire of the annoying popular girl in school, when the boyfriend of said annoyance dumps her in favor of Curtis’s character. Of course, the angry popular girl then uses this cue to ‘hire’ the greasiest boy she can find at school to go and make fools out of the new pair on prom night, not only giving the audience a visual manifestation of her sleazy soul, but also turning our simple slasher film into a slasher/Carrie mash up.

Ugh. If he says in the car any longer he’s going to leave a grease stain on her headrest.

Unfortunately, the film doesn’t do either angle particularly well. Oh, it’s serviceable, don’t get me wrong. But the movie just seems to do everything so by-the-numbers, that nothing really ends up being exciting or surprising.

For an R-rated movie, there’s not a lot of blood and the nudity is mostly from one walk-by mooning. There are a couple of tense moments, but they end up overshadowed by predictable outcomes. Even the killer ends up being predictable, despite the movie’s feeble attempts to throw in a couple of decoys. There are a couple things that don’t end up being explained (what’s with the lipstick?), but by that point you kinda don’t care.

To top it off, the film also tends to linger on certain scenes too long. For instance, there’s a good 5+ minutes dedicated to Curtis and her date disco dancing. Every time I watch it, I can’t help but think that some of that time could have been better suited to explaining some of greasy-boy and bitchy-girls scheme, or following the killer as he stalks his victims or,… well, anything else, really. Yes, movie, I like watching Jamie dance. No, movie, I don’t need to watch her go through the entire routine just so you can feel you got your money’s worth for the choreography lessons. Move along, please.

I think that the fault of Prom Night is that it was trying to elements from a script about how slashers are supposed to work and in doing so ended up not doing anything particularly well. It’s still an okay slasher, and it does have it’s moments, but there’s nothing really new or specific to differentiate it from anything else (unless you count the disco scenes, and really, I wouldn’t.) The killer is kind of lame, most of the characters are dull, scenes are unnecessarily drawn out and the plot is predictable. I don’t hate it though. It’s like horror movie comfort food and I’m alright with that.

Prom Night is available for streaming on Amazon Prime. 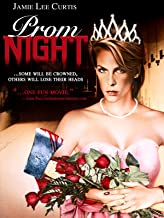 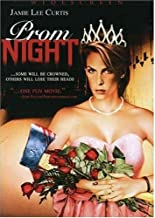