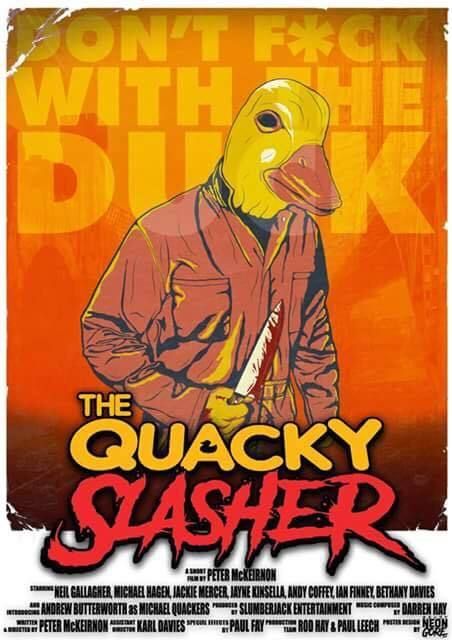 While still just a boy, Michael Quackers suffered a traumatizing event when he seemingly witnessed the death of his father at the beaks (feathers?) of the local pond ducks. The experience was so upsetting to Michael that it rendered him mute and he found himself in a mental institution. Now, some twenty years later, grown and fed up with hearing about the rampant crime happening in his city, Michael busts out of the loony bin and takes up life as a vigilante, donning the persona of the one thing he fears the most: a duck.

And you had so many other options…

The Quacky Slasher is a short comedy/horror film that cobbles together various elements in order to spoof both genres. First you have Michael Quackers, a clear stand in for iconic horror icon Micheal Myers, jumpsuit and all, and Quackers motivation is outright borrowed from Batman lore. You also have the a bit of a low-budget cop drama angle, complete with oddball gangsters and a pair of quirky cops trying to piece everything together. On the other end of the spectrum, the comedy bits are reminiscent of classic British comedy. To add to all of that, the film also has a synth soundtrack that is clearly inspired by 80s music, making the whole thing feel like a mini-nostalgia trip.

All that said, the film is really more of a comedy than it is anything else. Every character seems to have their personality quirks ratcheted up to 11 and it’s clear that nothing about the production is meant to be taken seriously. This is a movie about a grown man running around in a duck mask, after all.

Though whether or not the film will elicit any laughs or not is hard to tell. Much of the film feels like a collection of short comedy sketches loosely strung together by a wonky-ass plot. Some of them are more amusing than others, but any enjoyment one gets out of them is going to depend heavily on whether you’re really into British comedy, and even then some of the routines are going to be hit or miss. Unless you’re really into bad acting. Then you’re going to be in heaven. That’ll teach her to doubt the traumatized 8-year-old

As for the horror portions…well, the film is in no way scary, and it’s clearly not meant to be. The whole ‘horror’ angle just seems to be an easy excuse to move the plot forward. It does, however, have a surprisingly large amount of gore that I’m sure will please the horror hounds. Most of it is pretty cheesy and obviously fake, but I still think it’s something the horror fans would appreciate.

Duck Man can see right through to your very soul. Or to the back of your skull cavity. Whateves.

I think the film’s major downside is that some of the scenes drag on a little too long. The film is only 35 minutes long, with a couple of those minutes taken up by credits. Yet despite it’s short runtime, the movie still manages to have 2-3 scenes that go on for far too long. The film is at it’s best when it quickly goes from one quirky sketch to the next, so the scenes of ongoing, often pointlessly dull banter, not only feel overly staged, but also highly out of place.

No one likes you. Go away!

So is the Quacky Slasher any good? Well, at the very least it’s an amusing diversion. Horror hounds aren’t going to find much ‘horror’ here, though some of them will likely enjoy the practical gore effects that were included. Comedy fans will either be enamoured or disinterested in the dry British humour. And the swallard crime drama fans likely won’t enjoy how lighthearted the whole thing feels. On top of that, the acting is pretty (intentionally) terrible and some of the characters more obvious character traits wind up being more annoying than amusing, But if you like spoofs and movies that don’t take themselves seriously, than the Quacky Slasher is right up your ally. And if you don’t end up liking it, no worries, because at 35 minutes it’s not a huge time sink.

The Quacky Slasher is currently available on Amazon Prime. 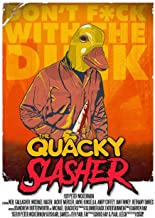