Yet another gift brought to you by TCM. It should be noted that is aired at 8pm, not my usual 2am viewing time, so the quality of this film is quite a bit better than some of the other write-ups I do with the ‘cult’ films TCM airs in the wee hours of the morning. Just a little FYI for those of you wondering where the hell I find all the stuff I watch.

Back to the movie.

It’s 1934 New York, smack in the middle of the Depression and down and out artist Eben Adams is having trouble paying the rent. He manages to sell one piece to a gallery, but while his skill with his art may be top notch he is told his work lacks heart and emotion. He needs a muse, if you will and walking home that day he finds one in the form of the young girl Jennie Appleton. 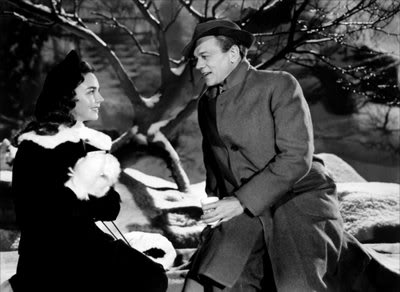 Asking questions about the parents and boyfriend of a
young teen girl you just met in a strangely deserted central
park isn’t creepy, right?

Jennie intrigues him, and why not? She’s charming, bubbly and wearing some very old-fashioned clothes for a 14-year old. At last Eben has found his muse, drawing a sketch from memory of the girl once he gets home. The gallery buys it quickly.

Yes. Better. Bring us more of these
and less of that still life s&%*

Eben is in high spirits and delighted when he meets up with Jennie again a couple weeks later….except this time she’s older. And when he sees her again some time later older still.

It doesn’t take a genius to know that something isn’t right. Every time Eben meets up with the girl she gets suspiciously older (And I don’t mean it in a “My you look so mature today” kind of way. It’s more like a “Hey, weren’t you 14 yesterday?” situation). And he spends the rest of the movie trying to find out exactly who Jennie is and how she keeps popping in and out of his life. 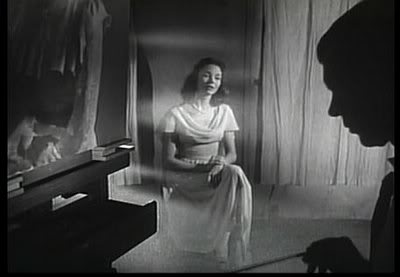 Oh, there’s also some painting involved for those of you
who didn’t pick up on that from, you know, the title and all.

Is Jennie real? A ghost? Or just a figment of Eben’s imagination? Eben sure thinks she’s real, but the viewer is left to wonder.

I gotta say, Portrait of Jennie is quite beautiful to watch. There’s some excellent use of light and shadow in this movie, especially in the scenes where Jennie is present.

Gorgeous, no? Now picture her moving eerily through the fog.

The city of New York is also given special attention, mostly in the films several short narration sequences, sometimes focusing on light… 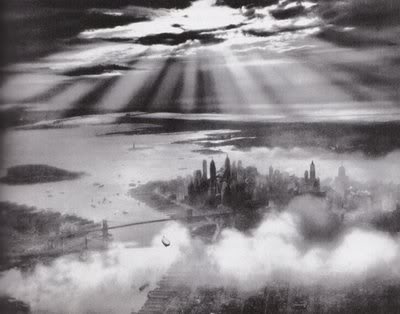 While other times adding a canvas overlay to the film…

Perhaps not as impressive by today’s Photoshopping standards, but in 1948 I’m sure this was the s*&#. Plus it adds a bit more artistic umph, which I also like.

I’m not usually one for romance stories, a lot of them come off as to sappy for me to really enjoy, but here I found enough fantasy and mystery for me to be entertained. Plus the sappiest thing Eben does is try to find out more about Jennie and really who wouldn’t do the same if Jennifer Jones kept showing up at their apartment?

The one qualm I have with this movie is one of the later sequences where the film was tinted green. I realize their logic for doing it, but the transition is so abrupt that it’s a little unsettling. I don’t care if they tried to placate me with a shot of a beautiful spiral staircase, it’s still bothersome.

All in all, Portrait of Jennie is a beautiful film that I truly enjoyed much more than I thought I would. To me it has just the right mix of romance, fantasy, drama, and mystery. So this is a definite recommendation to anyone interested in some form of that combination.

I shall leave you with this parting shot:

See, they can use color. Much better than that sickening green hue.

Portrait of Jennie can occasionally be viewed on TCM. 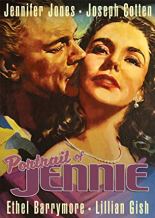 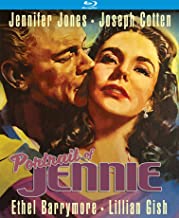