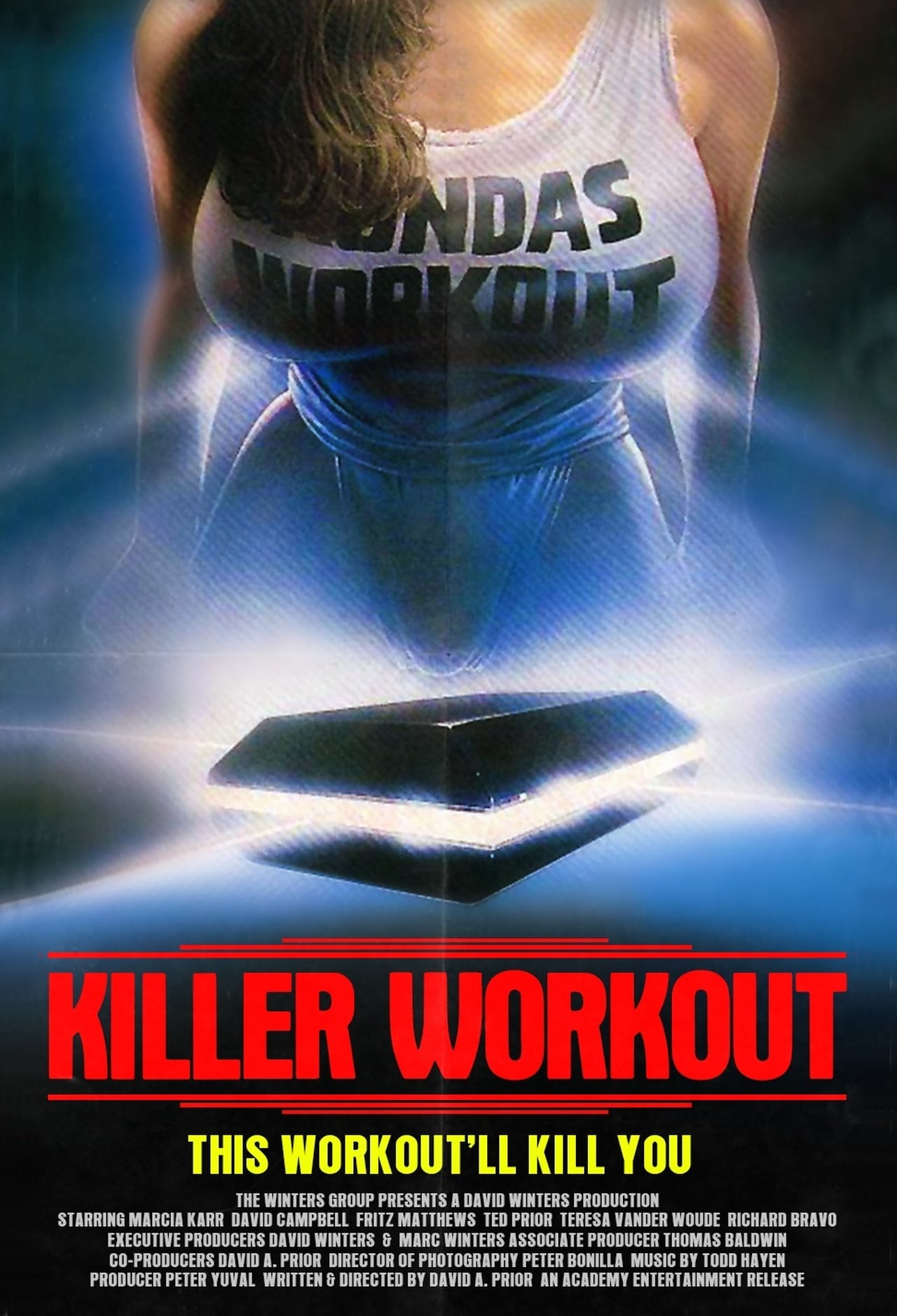 We open on a young woman named Valerie, a model who has just learned that she’s set to appear on the cover of Cosmopolitan magazine. Valerie is trilled. But her agent (manager?) has told the magazine she’s got a hell of a tan, so she rushes off to the nearest spa for a little late-night tanning session. But something goes horribly wrong (gasp!), the machine malfunctions and she ends up fried to a crisp. 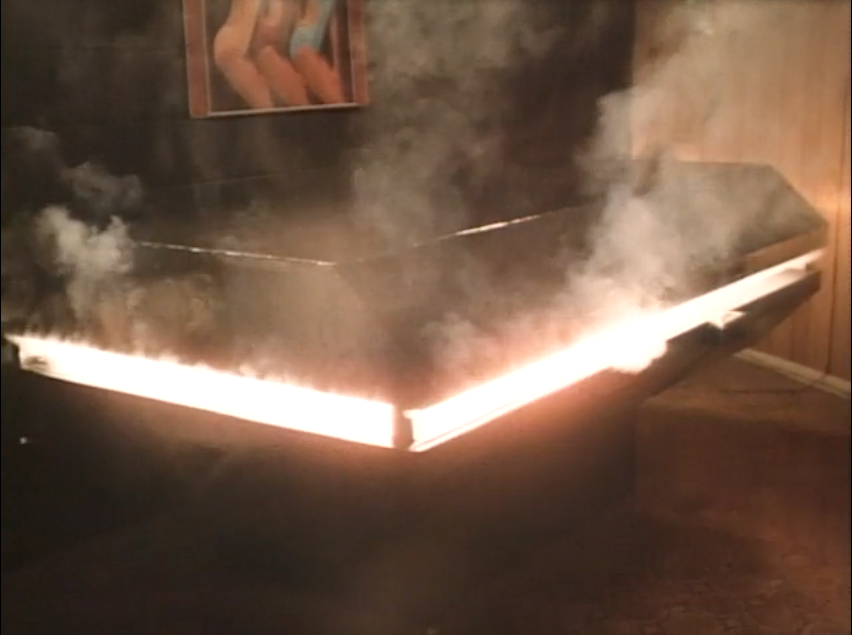 Pro Safety Tip: Never enclose yourself in anything that looks like a George Foreman Grill

Some undisclosed time later and we cut to an aerobic interlude at Rhonda’s Work Out, a work out studio owned by… wait for it… Rhonda. Rhonda’s business seems to be booming (or at least the aerobics division is booming, based on the number of turnout), but membership threatens to take a nosedive when the clientele start getting knocked off and dragged out in body bags by an unknown assailant wielding a giant safety pin. 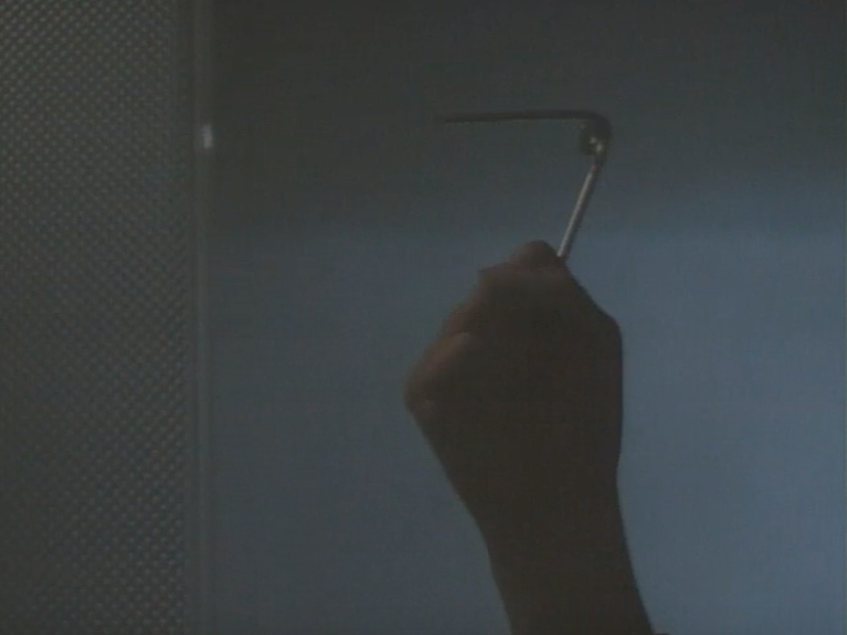 So I assume we can narrow the list of suspects down to all the angry seamstresses in the area?

Now it’s up to Detective Lt. Morgan to look through the suspects, sort out the red herrings and figure out who the hell the killer is before the entire gym is litterally poked to death. 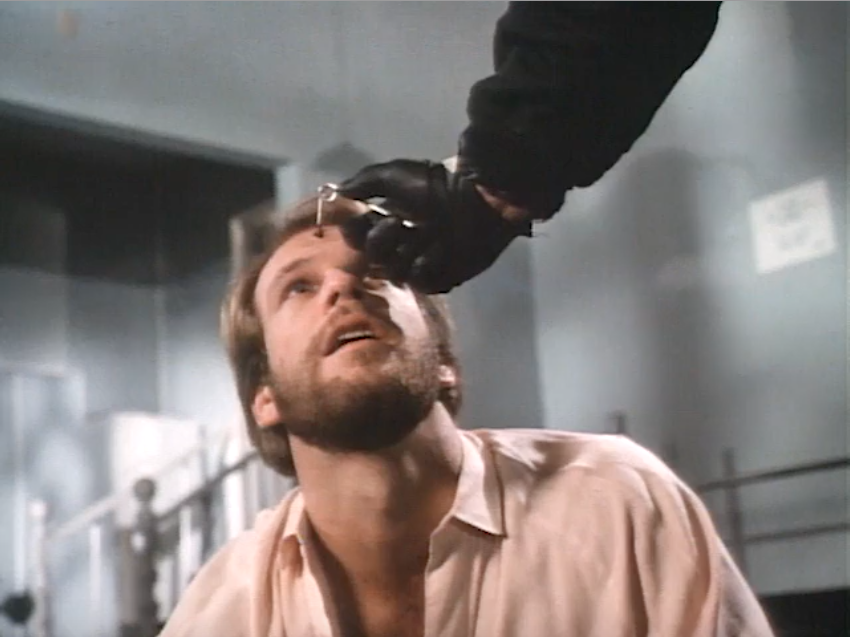 But unfortunately, like all slasher cops, he is terrible at his job and much poking there will be.

My first impression of Killer Workout was that it was a sleazier, trasheir version of Death Spa. As you can imagine, both films have a lot of the same elements. Minus the supernatural aspect of Death Spa, they’ve got similar settings, characters and scenarios. But Killer Workout if far more exploitative and, despite the copious amounts of colorful spandex to work with, lacks the artistic flair and eye for color that Death Spa does. But despite that it still manages to be kinda fun… in all the worst possible ways.

One could argue that the main character of the film is not Rhodna, or Morgan, or even the killer, but rather the copious amounts of T&A. The film can, literally, not go more than 10 minutes without showing either nudity, a woman walking around in incredibly skimpy spandex, or a group of women writhing around in – you guessed it – incredibly skimpy spandex. And the film in no way tries to be subtle about it either. Oh contraire, the film seems to revel in it, lovingly focusing on gyrating hips, squatting bums, and a plethora of bouncing boobies that were in dire need of a proper athletic bra. I don’t remember this move from any aerobic exercise I ever participated it.

And that blatant dose of misogyny may actually be the best character the film has to offer, because, let’s face it, all the named ones are even worse. Much, much worse. Just about no one in this film is likable. In fact, most of them seem to go out of their way to be massively unlikable. It’s like most of the characters are suffering from Movie Asshole Syndrome. Rhodna comes off as a haughty bitch who seems more concerned with club membership than she does with said members getting mutilated in her shower stalls. Muscle-heads Tom and Jimmy are creepers of the highest order. New hired-hand Chuck is billed as the type of hero who’s an arrogant prick you want to punch in the face. And Det. Morgan may be one of the worst cops in existence. As I was watching it I was struggling to think of a worse one I’d seen who wasn’t outright corrupt. He’s just that bad. He has no tact, no skill, and is so self-righteous and cocky in his great detective skills that it is simultaneously hilarious and infuriating to watch him as he bumbles his way from one murder to another. Dude, he was literally killed while you were in the building. Cockyness is reserved for people who are GOOD at their job.

And just to add the crappy cherry to the top of the crappy character pie, the acting in this movie is just about as enjoyable as the (named) characters. So not only is everyone a painfully damaged and exaggerated stereotype, but they’re also a poorly acted and exaggerated stereotype to boot. It’s so cringe-y you won’t be sure whether or not you should laugh or cry. Lines are stilted, looks are vacant and no one seems to know how to behave when they come across a dead body.

Dude. You’re a cop. Aren’t you supposed to, I don’t know, DO something other than stare stupidly when you see a corpse?

But I guess stupidity must be in the air surrounding this particular gym. Because even though the film states that members are quitting in droves, it still seems packed to the brim with unconcerned patrons gyrating to off-brand 80s pop hits. I guess they were so focused on their pelvic thrusts that they somehow missed the dozen or so white body bags being dragged out of the gym. 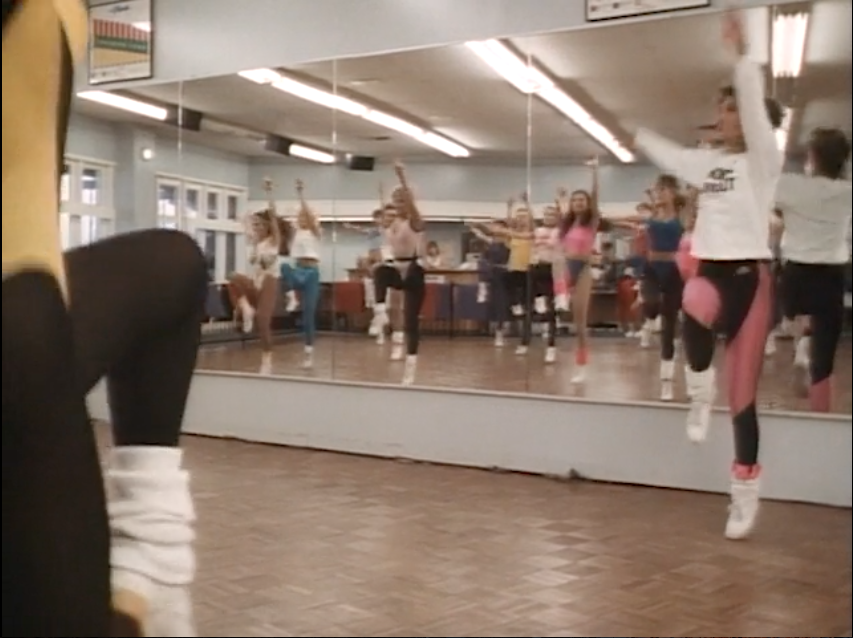 So is Killer Workout any good? Well, not really. I mean, if your bar for ‘good’ in slasher movies is based solely on how much you can ogle the female form than this should be added to your pantheon of greatness right away. But for most, this is going to feel like a sub-par slasher. The characters are boring and stupid, the acting is ridiculously terrible, the set pieces are dull, the gore and effects are minimal (the burn marks look like caked-on plaster), and most of what happens is fairly predictable. The two things it has going for it is the unique murder implement and the very 80s sounding soundtrack, but those two diamonds in the rough will only get you so far. I get that lots of horror movies are made on a budget, but this one seems to have been made on no budget and, sadly, it shows. Perhaps if they had spent more on the script and less on the soundtrack it would have fared better. But really, the only people who are going to want to watch this are people who like to leer at women, people who really like spandex and people who watch movies because of how bad their reputations are (*slowly raises hand*). Anyone else will probably be happier if they skipped it.

Killer Workout is currently available for streaming on Amazon Prime. 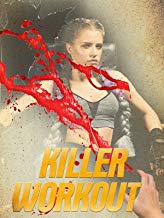 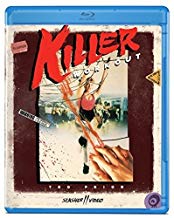 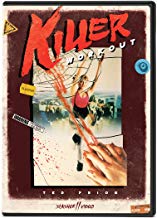