The Relic starts off with showing a scene of a tribe in South America performing some sort of ritual while some white guy takes pictures (I presume he is supposed to be a scientist or a photographer for National Geographic).

They give him some sort of concoction they’ve made (*sigh* armature) that makes him have some sort of hallucinogenic fit. One scene later and he’s freaking out on a cargo ship, trying to find something in a crate that’s set to arrive at a museum in Chicago.

Six week later some crates arrive at said museum, one contains an ancient stone relic, while the other is filled with nothing but leaves covered in some sort of fungus nobody seems familiar with.

But they look like those little beads people like to make necklaces out of. Maybe start your search in the local arts and crafts department.

Meanwhile, a ship has been found adrift in Lake Michigan. The outside walls are covered in blood and detective D’Agosta and his partner quickly find the missing crew below deck, killed and decapitated, by unknown assailants.

Sometimes you just know when it’s going to be one of those days.

Back at the museum, Dr. Margo Green is working late, having taken some of the leaves for analysis. She hears strange noises as she leaves that night, but makes it home without incident. The security guard, however, is not so fortunate.

I used to be scared of this very thing when I was younger.

With the gruesome death discovered the next morning, detective D’Agosta is called in to investigate the crime, which he suspects is linked to the same culprit who attacked the ship. He closes the museum down, much to the consternation of the management staff, who seem more concerned with their upcoming gala than the gruesome death of their security guard.

It falls to D’Agosta and Dr. Green to find out what’s going on and try to prevent more people from suffering a similar fate.

And it’s a really bad fate, I assure you.

At its heart, The Relic is a creature feature, and a very safe one at that. It follows the old time monster formula to a T.

Practical flashes of the monster are shown in the first two-thirds of the film, with the big reveal saved for the final act. The people you don’t like will probably die, and the ones you do like will be safe from any major harm. It even follows one of the rules from ‘Safe Monster Movie 101’: let the annoying, bratty children live, but kill off the token black guy while he tokes up in the men’s room.

If he’d watched Scream the year before, he could
have avoided this fate.

The characters are all rather safe too, with everyone filling their roles nicely. No one here seems out of place, but the above par script and the actors chosen (including Penelope Ann Miller, Tom Sizemore, James Whitmore, and Linda Hunt) does add some humor and color to the formula, boosting the quality and enjoyment up an extra level. Sizemore’s D’Agosta is a solid and matter of fact detective (albeit, one with a superstitious streak) and Miller’s Green is intelligent and proactive, which is a refreshing change from the genre norm. Damsels in distress do not create their own version of the Molotov cocktails afterall.

The monster effects here are quite impressive, thanks to the work of Stan Wilson (of Jurassic Park and Predator fame.) It’s almost like an amalgamation of everything he’d worked on before. It takes a good while to get there, but the monster is actually pretty badass once you get a good look at it.

Unfortunately, that’s assuming you can get a good look at it, because this movie is dark. And I don’t mean it that focuses too much on death, or the hopelessness of humanity, or some crap like that. I mean it is DARK. As in, what the f*&# is going on, I can’t see a damn thing.

Director Peter Hyams apparently has a real thing for shadows and only using a single light source, because what could have been used sparingly or to create ambiance

Note: This has actually been lightened. It was originally much darker.

…instead can just make your head hurt as you squint trying to figure out what you’re looking at.

Turn on a damn light!

It’s really quite a shame, though it does have the added benefit of obscuring the films other graphical flaw: Late 90’s CGI.

For the most part, the monster is a solid, animatronic puppet, but any time any fast movement is involved they switched to CGI. While reviewer Gene Siskel might have praised the special effects in 1997, today they’re dated and obvious and not in a good way. 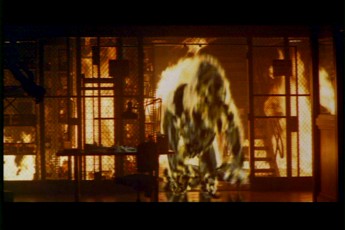 This is the closest to a ‘full creature spoil’ as
you’re going to get from me.

The Relic is really one big stalking monster scene after another, aided heavily by the chemistry between the characters. While it’s cliché, it does all the clichés well and throws in a decent script and a strong female lead for good measure. All the scientific talk means it’s not a movie that you can completely turn your brain off too, but it’s pretty close and actually pretty fun. At 105 minutes it’s probably too long, but the monster is pretty slick, so anyone who’s a fan of creature-features can probably risk giving this one a go.

The Relic is available to rent on Amazon.

It has also been released on DVD and Bluray. 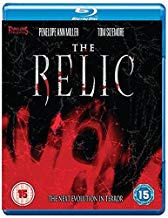 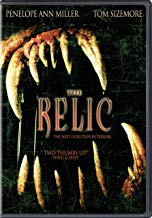